Few things in life are simultaneously joyful and infuriating.

But, reading to my 3-year-old grandson Avery is just that. While I'm crazy about snuggling that sweet boy and enjoying terrific children's literature together, from time to time I cringe.

In sharing a variety of children's books that have grandparent characters, I discovered something. The grandparents in books are nothing like the real "grands" I know. My grand friends are everything from aeronauts to zookeepers. They are vibrant, vivacious, and bon vivant. They can be described with an alphabet of adjectives from alluring to zesty.

The books I'm reading, though, show grandparents who are quite the opposite. The grands in most children's literature don't have jobs, volunteer or paid. They can be described in adjectives from addled to zany. They all fit a similar profile -- they bake, they rock (only in chairs, not in a good, rock and roll way), they knit, they garden, they fish or golf, and they do it all with paunches and ponchos and very little panache.

I shudder to think about the image of grandparents rolling around in the minds of today's kids after reading these books. Are they confused because their own grandparents are ever so much more fascinating than the ones they read about?

So who is responsible for promoting this considerably outdated image of grandparents?

It's you. And you may not even be aware of it. You are likely one of today's real grandparents actively leading an interesting and full life. I mean you grew up in the time of mini skirts, flower power, war protests, first person on the moon, psychedelic substances, bell bottoms, sit-ins and love-ins. There was no chance you weren't going to revamp the grandparent experience when you arrived! Yet you're reading a book showing the typical 2-D grandparents. There's silly Grandma who's baking a pie and she's really quite sweet but rarely is she seen rock climbing or working in a lab. And don't even start me on what she's wearing. Yes, Grandma is wearing a muumuu and is never portrayed in haute couture, skinny jeans and stilettos, or a killer cocktail dress. Her perennially white hair is always in a bun. A bun? When was the last time you put your hair into a bun?

The doddering grandpa is sporting a comb over (when he has hair that is), his face is inexplicably red, and the poor guy walks with a cane and really doesn't have much of interest to say. He's not a world-famous neurosurgeon or taking a barge and bike trip though France, as actual grandfathers might be.

Think back to your grandparents. Are you like them in style and substance? Not likely, as things have changed since your grandparents' time. We may be older than our grandparents were when they became grandparents, but we look and act considerably younger. Apparently, no one has alerted book publishers about this monumental shift in image. In earlier generations, the main job of the grandparent was to be at home supporting the family, particularly emotionally. While we still serve in that way, today's grandparents are also out in the world. We work hard, we play hard, and we have brilliant lives outside of the house as well as inside.

Something has to be done. Children should see who we Boomer Grands are and what we do. So, I put a call out for photos in anticipation of creating a children's picture book about "Real Grands." I asked people to send pictures showing the ways in which they are spending their "grand" years. The pictures told the wonderful true story. There were grandmothers in the air, having just earned a pilot's license, grandmothers on the ground and in the sea, having just competed in a triathlon. There were grands on wheels! I received pictures of grand couples outfitted in full leather regalia, standing proudly next to their motorcycles. The artist grands turned out in droves: musicians, painters, sculptors, calligraphers, and quilters. You might be surprised to know just how many grandfathers are running races and setting records.

So, using those photos as inspiration, I created a children's book about real-life grandparents, because we're not your mother's grandmother. (Not that there's anything wrong with her!) Real Grands: From A to Z, Everything A Grandparent Can Be, portrays us being all we can be ... and then some!

It's possible you've already started working to change the image of grandparents by choosing a name that suits you. What other generation of grandparents stewed over what to be called? From Gaga to Glamma, From Poppy to G-Man, today's grandparents are beginning this new stage of life by picking a moniker they believe matches their youthful living style. Can you imagine your grandmother saying, "Honey, why don't you call me Glamma?"

I hope you'll join me in the mission of updating the grandparent image. I'm going to slap on my stilettos and kick down some doors to let in the light. The next time you see vacuous Granny or dopey Grandpop in a book, hug your little grandchild a bit closer and whisper, "Don't believe everything you read. Real grands are fly and fabulous, like me." 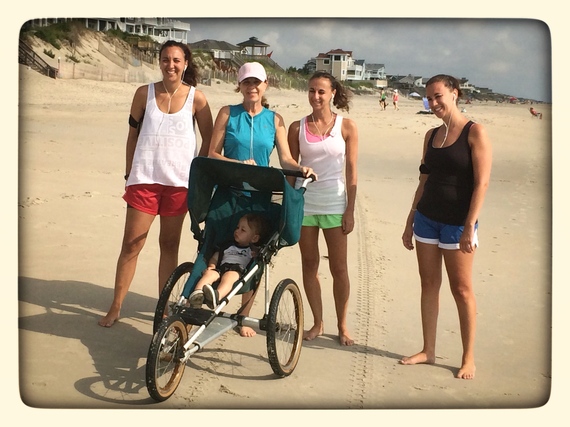