Forged with the despicable dividend of stolen trade secrets, priced with monopoly collusion, then traded with fraudulent labeling to dodge U.S. duties, steel from China violates every principle of capitalism. That’s in addition to defying both U.S. and international trade laws.

U.S. Steel requested this unusual intervention after China hacked into its computers, ripped off trade secrets, then used those secrets to directly compete with U.S. Steel in the American market. China is flooding the international market with excess, government-subsidized steel. That is closing mills and killing jobs from South Africa to Great Britain to North America. The United States can choose to ignore this. It can become a weakling, reliant on other nations for steel, including some, like China, that clearly are not allies. Or, the United States can act now, as U.S. Steel demands, to secure America’s industrial strength and independence. 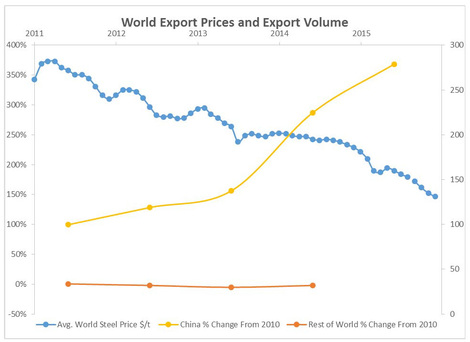 U.S. Steel is the largest integrated steel company headquartered in the United States. Integrated means that it does everything from mine ore, convert iron to steel and finish steel into sheets and plates and beams. Last year, it lost $1.5 billion, even as it slashed costs by closing operations in Fairfield, Ala.; Gary, Ind.; Keewatin, Minn.; and Granite City, Ill., and furloughing more than 5,000 blue and white-collar workers.

As U.S. Steel’s petition to outlaw steel imports from China explains, there’s no amount of cost-cutting American steel companies could do to keep up with the illegal activity that’s supporting the steel industry in China.

The petition puts the racketeering in three categories. There’s price fixing conducted through a government-established cartel called the China Iron and Steel Association. There was the theft of trade secrets that took U.S. Steel a decade to develop. And there is a scheme to duck U.S. trade duties imposed on Chinese steel involving shipping the steel to another country, such as Malaysia, and claiming it was produced there.

The petition to outlaw imports starts to read like a spy novel when it gets to the part describing the scam that Chinese steel distributors established to elude American duty payments.

Investigators knew something was fishy with Malaysia, Thailand, Taiwan and Vietnam because steel shipments from these countries spiked after 2009 when the United States imposed duties on a certain type of steel pipe, Oil Country Tubular Goods (OCTG) from China.

Straw buyers started talking to distributors of steel from China and got some fascinating responses. It’s all documented in the U.S. Steel pleading to the U.S. International Trade Commission.

The straw buyers asked the steel distributor for a price, then expressed concern that the quote was too high. The distributor would then offer to lower the price by duping U.S. customs officials by routing the steel through a country like Indonesia or Malaysia or Thailand, where the steel would be marked as made there – sometimes without ever leaving the original ship. That was the cheapest option.

“We load the casings from China mainland, and deliver to port Klang, Malaysia. Then our agent will reloaded the casing into new containers, to transport to H[o]uston. Meanwhile, they will change the documents in the name of one exporting company in Malaysia. Also they will issue the certificate of origin to certify the casings are from Malaysia origin. Thus, there will no high anti dumping duty for the customer.”

It’s not just one example. This is not a piddling case. The document includes nine instances of distributors offering to falsify documents and “trans-ship” for some of the largest steel companies in China including Baosteel, Hebei, Ansteel, Shandong, Wuhan, Shougang and Benxi.

The largest of these companies operate with the benefit of state-imposed collusion. The U.S. Steel petition describes how the government established the China Iron and Steel Association and required the biggest companies to participate. Its purpose is to help companies control the price of raw materials, share cost and capacity information and regulate prices, including prices of products exported to the United States. All of this, of course, enables them to destroy competitors.

If this sounds like a bunch of U.S. railroad and oil magnates sitting in smoke-filled rooms establishing monopolies before the Sherman Antitrust Act was passed in 1890, that’s exactly what it’s like. And that’s exactly why U.S. Steel says China’s monopoly steel should be blocked at the border. Commodities manufactured in connection with a Sherman Act conspiracy may be denied entry into the United States. 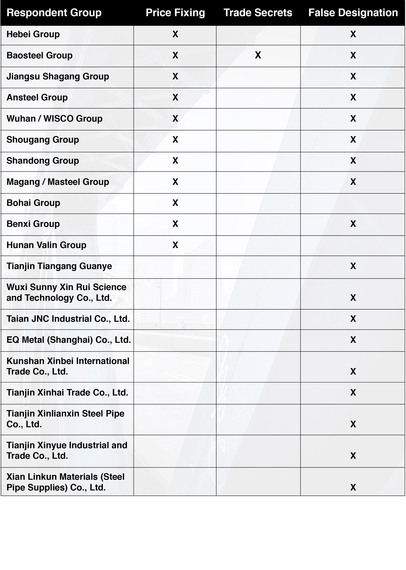 Then, of course, there’s the outright theft of trade secrets from U.S. Steel by the government of China. Throughout 2010, the Chinese government subjected U.S. Steel to cyber-attacks. Then in 2011, government hackers in China hijacked information from U.S. Steel on advanced high-strength steel used in the auto industry.

Companies in China had been unable to develop this technology and were under pressure from their domestic car companies to get it. So their government stole it for them. After the theft, one of the largest steel companies in China, Baosteel, used the trade secrets to produce the specialized steel and export it to the United States in direct competition with U.S. Steel.

Two years ago, the U.S. government criminally charged five Chinese military officials with economic espionage and other offenses for hacking into the computers at U.S. Steel. In addition, the government indicted the Chinese military officials with stealing trade secrets from the computers of the United Steelworkers (USW), Allegheny Technologies, Alcoa, Westinghouse Electric and SolarWorld.

China wants to maintain civil peace and high employment by running its mills at rates that could not be sustained in a country that must worry about markets and profits. China will do anything to continue that. When duties were imposed because of China’s illegal subsidies, it contrived “trans-shipping” to defraud duty collectors. To kill competitors, it formed a cartel. When it couldn’t match quality, it stole secrets. There’s no way to stop this but to stop all of it. The United States needs a vibrant steel sector for economic and national security. Outlaw Chinese steel.