Obama knew all along that Iran had a secret uranium factory. He may be more of a master strategist than his foes--and even his friends--have realized.

The key to understanding today's announcement on Iran is this: President Obama knew about the secret Iranian facility nine months ago. Before he began his strategy of engagement, he knew Iran was lying about its program. When he extended his hand in friendship, he knew Iran had built a secret factory to enrich uranium. Before he offered direct talks, he knew Iran was hiding a nuclear weapons breakout capability. Each move was denounced as "weak" and "naïve" by the right. That talk looks foolish today. These were the moves of chess master, carefully positioning pieces on the board, laying a trap, and springing it at the opportune moment. 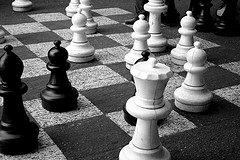 We now know that Obama was not acting on impulse, or philosophy or general principles, but on deep strategy. He knew better than his critics that Ahmadinejad could not be trusted. He just had a better plan for how to deal with him.

Obama is now well positioned to unite world leaders in a long-term strategy to back Iran away from nuclear weapons. While some nations mistrusted the previous administration--fearing a repeat of the Iraq War--they have more confidence in Obama. They don't believe he will use military force, except as a last resort. Meanwhile, Obama's missile defense decision--a move that puts more military assets in position more quickly against the Iranian missiles--not only increases the pressure on Iran but allows Russia to move closer to the U.S. position without appearing to be buckling to America.

Obama's open hand also undercut Ahmadinejad at home. Previously, he was able to use the nuclear program as a nationalist rallying cry, posing as the warrior president defending the nation against Western attack. He kept the reform movement down and IAEA inspectors out. Obama's strategy of engagement has foiled Ahmadinejad, allowing the forces of reform to surge in Iran. Without the threat of a US attack, Iranian opposition leaders have more freedom of movement and are less vulnerable to the government claims that they are tools of US imperialism.

Internationally, Obama is restoring American credibility. By pushing the military option with Iran to the back of the table, he increases support for sanctions. By proposing a balanced, comprehensive nuclear policy strategy, backed unanimously at the United Nations Security Council this week, he increases support for tough measures against those that cheat on their treaty obligations.

Obama has now backed Iran into a corner. The solution will not be easy or quick, however. A great deal depends on getting Russia and China to agree to tougher sanctions. There are options that Europe and the US could employ without them, but their agreement to UN sanctions would greatly increase the financial and diplomatic pressure on Iran. UK Prime Minister Gordon Brown, speaking with Obama and French President Sarkozy this morning, laid down a December deadline for sanctions.

All of this is now more likely than at any time in the past few years. We will know soon, within the next few months, if Obama's sophisticated, comprehensive approach is working. For now, we have a new appreciation of Obama, the strategist.