Have you ever been in a love triangle?

I don't mean the Love & Peace ones that were so popular in the 60's. I mean the ones where three characters are involved with each other, yet only two have all the fun while the third one is made to feel outnumbered and outmaneuvered all the time?

My triangle involved yours truly, my significant other, Richard, and a green-eyed beauty by the name of Cleo. Cleo, short for Cleopatra, was young, athletic, graceful and seductive. In short, the perfect specimen of a female...CAT!

When Richard came into Cleo's and my life, I was thrilled. Finally, a real man who didn't preferred dogs or was allergic. In fact, he liked her so much that every time we had to go out he stated his mantra: "Go early, leave early, go home and bond with the cat."

As he moved in and the relationship settled, he became progressively reluctant to leave the house. His excuses were many and varied. When I complained that other men take their girlfriends to the opera or the theater, he responded that I too can date homosexuals... While he reluctantly agreed that going to the movies could be considered a heterosexual activity, there was never a movie good enough to justify leaving the house. Wasn't it just better, he reasoned, to stay home with Cleo and watch FROM RUSSIA WITH LOVE once again?

I should have been suspicious then, but I was vain enough to think that it was me he loved and came to live with. Yet, I could not ignore the fact that the two of them have become inseparable. First, they got on the same schedule, staying up late and napping during the day... I would peek from my home office into the bedroom and would see them changing sleeping positions throughout the day in prefect synchronization, which, frankly, we rarely achieved...

When they weren't sleeping, they entertained themselves in cute little games: During the financial bubble, whenever he opened the door to visitors, she would sidle up to him and he would introduce her as his "financial Advisor"... One Sunday, when I was out of town and I called to check on what he was up to, he said "Oh nothing, Cleo and I are just sitting around reading the paper..." Another time, when she wasn't feeling well, I called to inquire about her and he said: "She is much better, thank you. You want to talk to her?". It all seemed harmless fun, except it became very clear that he stopped thinking about her as a pet, and more as a true companion. 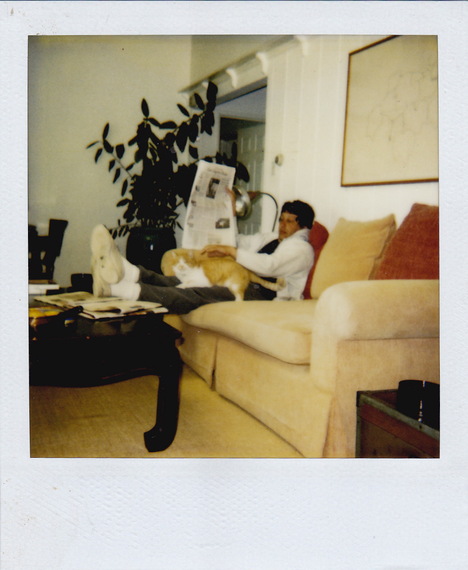 And Cleo was not ungrateful. She slept on his side of the bed, got up when he got up , ate when he fed her, relegating me, pretty much, to the dubious honor of cleaning her cat box.

Talk about being outmaneuvered!

I had to do something, but what? I could, of course, kick him out, but what if it was true that once past 40, I had more chances to be killed by a terrorist than to be hooked up again? What if at 50, even the terrorist couldn't be bothered? It was too dangerous. It was better to fight back in the time honored way. After all, wasn't love fickle and change inevitable?

I spared no expense. I brought home the most expensive, fragrant cat nip. I ordered a custom made Gucci leather mouse for her to play with.. and gourmet foods laced with caviar to nibble on. This was L.A. after all...

The speed in which things happened surprised even me. I'll never forget the look on Richard's face when he walked anxiously into my office: "where the hell is Cleo? I haven't seen her for hours? wait... what is she doing here?"

There she was, perched on top of my bookcase, looking at the unfolding scene with feigned boredom. "Jezebel", I heard him hiss as he retreated down the corridor, "traitor", "turncoat" and finally, the word that let me know that he was truly defeated: "women" ...

As he slammed the door on his studio, Cleo looked at me as if to say "What's his problem? Honestly, I don't know what I ever saw in him?"

My smile was sweet and savory. It was a long road and it took all I had, but I was finally outnumbered no more!

PS: My sweetest Valentine to Cleo and Babe who are no longer here and to Richard who is still very much present!