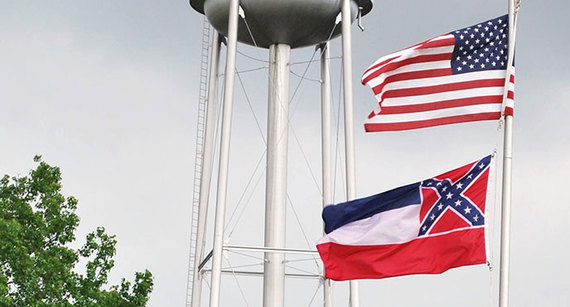 For two weeks in August, I traveled across Mississippi to read from and talk about my first novel. Though I now live in Denver, Colorado, I was born in Jackson. I graduated from Delta State University. I worked for a year as a newspaper reporter at the Greenwood Commonwealth. This trip was a homecoming for me, but also an awakening. I am, I realized, an outsider in my home state.

It is with an outsider's perspective that I followed the debate about the Mississippi state flag, which was much in the news during my recent visit. Should the Confederate emblem be removed from the flag, as notable natives including author Richard Ford, actor Morgan Freeman, sports legend Archie Manning, and others called for in a letter to the Clarion-Ledger? Or should the flag be preserved for the cause of history and heritage as so many people, including Gov. Phil Bryant, argue?

This is the sort of debate I've become accustomed to hearing from afar. Whenever newscasters mention Mississippi, I cringe and hold my breath. What will the headline be this time? Is it another study revealing stunning rates of poverty? Illiteracy? Teen pregnancy? Is it a report on a state representative spewing racial slurs? Discrimination wrapped up in the protection of religion? Bribes and corruption in the local prisons? What embarrassing, shameful thing will my home state be known for today? There is rarely good news reported out of Mississippi and that pains me, because Mississippi is my home. When I sit down to write, it is the state of Mississippi that feeds my imagination. As a person born and raised in the state, I am well aware that these humiliating reports on the national news do not tell the whole story.

Mississippi is home to many smart and compassionate people working hard to make a better life for themselves and for their children. It is a state overrun with writers, musicians, educators, actors, scientists, historians, and culinary masters. I try to tell people about the good in Mississippi, but my voice is not strong enough to drown out the pervasive narrative of shame.

When people learn I am from Mississippi, they are often surprised. My accent has faded over the years. My political views are progressive. I don't fit the stereotype of the Mississippians they see on the evening news. Then again, I'm one of the Mississippians who moved away. On social media, I see grumblings about the letter in the Clarion-Ledger. Those people don't live here anymore, my online acquaintances point out. John Grisham doesn't live here; Jimmy Buffet doesn't live here. They don't have a right to tell us what to do with our flag.

I don't live here anymore either, but Mississippi is still my home. And it is past time for my home state to remove this emblem of hate and divisiveness from the state flag. It is past time for us to embrace a more inclusive emblem, one that will not drive away business and scare away major sporting events, one that does not stand as a symbol of violent subjugation and hatred. Holding on to the Confederate emblem when the rest of the world and most thinking people in the state have turned away from it, puts us on the wrong side of history. Again. How many times can we be on the wrong side of history?

For once I'd like to turn on the evening news in Colorado and hear something good about Mississippi. Let's start with the flag. Remove the Confederate emblem and redesign the state flag into something we can all fly with pride. It is past time and I'm so tired of bad news.