It is not an easy film to understand, nor does one ever grasp the complete story, if there is one. But it is remarkably hypnotizing and rests in one's visual memory for a long time afterwards. French director Bruno Dumont's new film Outside Satan -- which just this month sold out a theater at the Tokyo International Film Festival -- is about two odd nameless young people who wander around the fields of a village in northern France, and every so often kill someone. Or rather, the hobo-like young man kills: shooting the girl's abusive stepfather, strangling a young hitchhiker, or poaching some wild beast for food. Perhaps he is an evil serial killer or perhaps he is -- as the woman spectator next to me whispered (her speculation) -- a Jesus-like exorcist, driving the devil out of the people he murders. Indeed the girl he strangles sputters up devilish foam from her mouth as she lays quivering naked by a riverbank. Then she suddenly revives and swims away (or dies?) in a river, splashing.

I may not have understood it, but I loved watching this film for the entirety of its 109 minutes, enjoying simply the pleasure of hearing these two stomp around the pebbly roads of the village, the rain dripping in a gutter as they smile at each other in eerie silence, the striking of a match as the demented (or gifted?) boyfriend lights a fire in the marsh. Dumont purposefully uses average looking if not ugly actors, to break from the Hollywood model, and because of this -- and many other aspects of the film -- one feels a refreshing sense of freedom from typical movie constraints. One just lets the images flicker on one eyes, hears the wind in the grass, and muses on good and evil. It is rather like taking a walk along a marsh in France oneself, with a creepy subtext.

Incidentally, I happened to see this film for the first time at its premiere at Cannes, and seeing it was so indulgently pleasurable (note, most critics find it deadly dull) that it nearly ruined my appreciation for Terrence Malick's Tree of Life, which played right after. How, after Dumont's license to free spectatorship,could I enjoy a film which tells me from its opening credits that the story is going to be about evil (the quote from The Book of Job that Malick chooses to ponderously announce his film) and in which every shot is controlled to make the spectator realize the Truth of Life? The camera in Dumont's film wanders and jolts about the village; Malick's camera forces me to close-focus on just what he wants me to think about. His characters, sweet Mom and brawny Dad, drawn in obvious sepia tones, remain distant, even in the most beautifully evocative shots. In contrast, in Outside Satan, I felt I was right there with the young girl as she sits on her bed, stroking her arms, with the trees in the wind outside the window, and behind her, pale blue flowered wallpaper.

Bruno Dumont shared the same opinion, when I had the honor of meeting him last spring after the premiere. 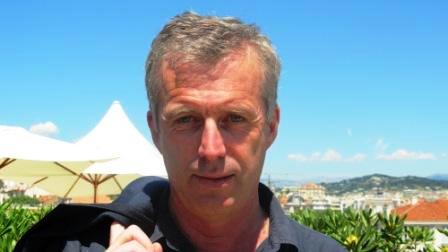 "I don't like contemporary cinema or any of my colleagues' films here at Cannes," Bruno Dumont told me point blank. "For precisely this reason. Too controlled. This is not cinema, the way it was in the 1960s, 1970s, when auteurs made art, when we had masters like Pasolini and Fellini. Alain Cavalier is one of the few directors here today still making cinema."

A very self-controlled, confident and handsome man himself, Bruno Dumont, a former philosophy teacher, was very sure of his film aesthetics and explained his view calmly, back erect, as he walked alongside me by the sea, the sun streaming down on us.

"I need spectators to participate in the film, to finish it," he stated, an enthusiastic twinkle in his eye. "Hollywood films are alienating to the spectator because they use too much dialogue, too much explication and leave no space for the viewer. They depress me. I use direct sound, mono not stereo. Just direct sound, so for every shot there are only two sources. Sound creates an intimate effect: the sensation to feel the place. It makes the viewer enter. You have the liberty to hear what you want."

"I also deliberately chose a female lead who was a bit masculine. I wanted to crack the conventional image of the feminine. The film industry creates stereotypes. I did not want a pretty young girl."

Dumont's goal, he announced succinctly, is to find modern images that have sacred power.

Especially since he is an atheist.

"An atheist?," I asked, surprised. "Yet you make such mystical films, with archetypal images of devils, baptisms and rebirth. I would say your films go so far as to hail the transcendent."

Indeed, In Outside Satan, the drifter every so often bows in the grass, washes his hands and prays as the sun rises.

And the climax of the film is a miracle.

"There is no god. I AM an atheist," Dumont said, staring straight ahead. "It is up to us to become God. We need to be elevated, to become saints. God alienates people from themselves. Yes, my films are mystical, to make people feel the mystery, to inspire them experience for themselves the miracle of existence."

"Is that atheism?" I asked. "To believe in miracles and mystery? It is not how I think of atheism."

"Then atheism has to be redefined. As having poetry, belief in mystery, mystique, love. Cinema is my religion. It is a way to make people sensitive, through emotions. To make them feel, experience empathy. People are touched and act ethically when they are emotionally touched."

"The miracle in this particular film," he added. "Is to go from death to life. The cycle is complete."