RENO, Nev. -- Last Friday I was on a date with a Republican girl when I met Jared Lovejoy and Lisa Chacon, who are running the grassroots "Obama-Rama Swing State '08 Tour."

As many people know by now, Reno and the surrounding county, Washoe, is the region that will decide who will receive Nevada's five electoral votes, and perhaps who will be the next president. Though different local and national media polls show slightly different results, the general consensus is that Sen. Obama holds a small lead in the state, while Washoe remains a toss up.

Before Obama began dominating the airwaves here, overpowering the McCain campaign with TV ads, he had already built up a strong grassroots presence. And with two weeks till the Big Day, the grassroots campaigns have not slowed down their efforts.

Lovejoy and Chacon, based out of California, have been running a unique last-minute and unaffiliated campaign on behalf of the Illinois senator. They drive around in a discreet van with a built-in projector that they use to display footage on the broad sides of buildings in swing-state cities.

I didn't know about the Obama-Rama Tour until I went to park my car last Friday night and saw a giant projection of hip-hop superstar Will.I.Am's music video "Yes We Can" playing on the side of a skyscraper downtown, speakers on the ground playing the soundtrack. The parking lot was full, so I put my car in neutral and stopped right there in the street, watching the video. There was a small crowd standing in the parking lot watching as well.

Inspired, I distractedly leaned over to my date and said "Obama will be remembered as one of the greatest Americans of all time," forgetting for a moment that she was a staunch Republican.

Sunday night, I went out "video-tagging" with Lovejoy and Chacon. The duo had spent the weekend going back and forth from Reno and the slightly more conservative capitol of the state, Carson City. There were not a lot of people out on Sunday but it was an interesting experience just the same, to be standing in a parking lot looking at a gigantic image of Obama projected onto a building and watching passersby stopping and watching the image, mesmerized -- some confused, others inspired.

"It's really fun," Lovejoy said, regarding the tour. "People have a great response to it. And we can show all the creative things other people are doing," like the various music and remix videos and collages made about Obama.

"I have a feeling Obama will win and it will be a crazy feeling and everybody will want to party for a couple days," he added. 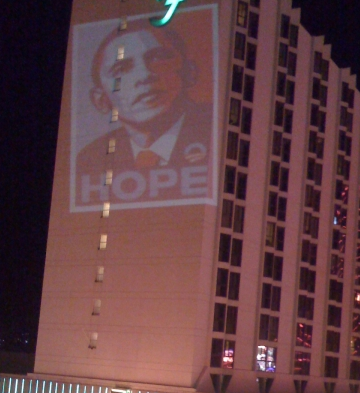 It's important to note that their tour is not funded in any way by the Obama campaign. All expenses are either covered by their personal funds or by donations, either made in person or through Pay-Pal on the tour's website. The tour schedule is also available on the site and Lovejoy and Chacon encourage anyone in the cities they will be in to contact them if they are interested in having them at an event.

Back at the parking lot on Friday night, after the music video is done playing, a group of what appears to be almost exclusively Obama supports are standing around and taking photos of the whole spectacle. Across the street is a popular bar and people are pouring out of it to see what all the fuss is about. As for me, I was trying to learn what I could about the whole ordeal as fast as possible so I could continue with my date.

Speaking of which, though she would never admit it, I think my Republican date was just about as moved as I was by the whole thing.