Every time ISIS (or ISIL, or the Islamic State) releases another executionary video or gruesome photo, the reaction is the same. Outrage, then paralysis. For all the cries of "They must be stopped!" the Islamic State seems to be making quite a bit of progress. 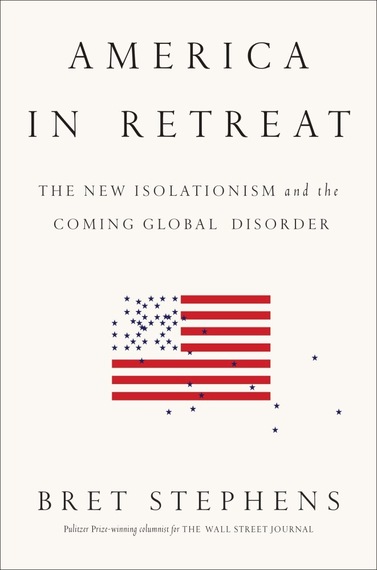 Bret Stephens, Pulitzer Prize-winning columnist at the Wall Street Journal and author of a new book about America's place in global affairs, advocates breaking the cycle in a different way. "They [ISIS] actually kind of exist in a philosophical context," says Stephens, who studied political philosophy at the University of Chicago. "It's the classic battle between ancients and moderns, between politics centered on virtue and politics centered on freedom."

In practice, of course, ISIS is far less poetic. The group kidnaps Christians, enslaves women, and crucifies children. Their military conquests are both terrifying and impressive -- ISIS now controls a territory larger than the United Kingdom.

But while speaking at an event last month hosted by the Zionist Organization of America (ZOA), Stephens said it's not just ISIS, but us, that needs to revamp their ideology.

According to Stephens, the battle is not over policy. There is nothing the U.S. can do to make ISIS like America. We are warring over "the core things that our civilization believes in," he started. "And how that squares with what too much of the Muslim world believes in."

The U.S. does not want to admit the divide. "ISIL is not Islamic" President Barack Obama famously declared during his September address, a line of thinking that Stephens sees as one of the administration's many faux pas. "No, Islamic State does not represent all Muslims. It does not represent a majority of Muslims. It doesn't even a represent a small minority of Muslims. But to suggest that it isn't Islamic is both presumptuous on our part and profoundly untrue."

It is also shooting ourselves in the foot.

"During the Cold War," explained Stephens, "people like Harry Truman, Jack Kennedy, and other 'Cold Warriors' didn't say, 'Oh, we're just fighting a bunch of militants in the Kremlin. Don't call them communists because communism is a wonderful philosophy that professes the brotherhood of man and they're a terrible perversion of communism.'"

Of course, communism and Islam are by no means the same. But by identifying the enemy as a world view that stands counter to ours, it changes our approach. "We fought the [communist] ideology. We explained what was wrong with it. And we made the case for capitalism, for liberalism, for democracy. But there's no way we can do something like that against a group like Islamic State if we're not even conceding that they stand for something."

Egypt's President Abdel Fattah el-Sisi -- a pious Muslim himself -- believes that recognizing the current problem with Islam is the first step towards progress. Speaking earlier this year at the al-Azhar University in Cairo, Sisi called for drastic introspection:

"We are in need of a religious revolution. You imams are responsible before Allah ... The entire world is waiting for your word ... because the Islamic world is being torn, it is being destroyed, it is being lost ... by our own hands."

When the U.S. ignores the "Islamic" part of the Islamic State, the ones who suffer the most are those calling for reform. "Everytime they try to speak-up," said Stephens, "they get shot."

He pointed to examples old and new for guidance. In 2009, during the Iranian Green Movement -- nicknamed the "Twitter Revolution" -- the U.S. helped Iranian protesters and dissidents digitally communicate. During the Cold War we lionized those that stood for our values. "What did we do in the 1960s and 1970s to help dissidents in the Soviet Union? We raised their cases. We gave them political asylum. We made them prominent. Everyone in the 1960s knew the name of [Aleksandr] Solzhenitsyn." Stephens finished on a disturbingly modern note: "Well who are the Muslim Solzhenitsyn's today?"

It is horribly unfortunate -- and strategically foolish -- that those fighting our same cause are left disempowered and alone. Even reasonable opportunities for change, like the "flogging blogger" incident, are purposefully overlooked. The Obama Administration has adopted ignorance as part of its platform.

Meanwhile, the Islamic State continues to grow. It attracts roughly 1,000 foreign fighters every month. They're enticing young men with an exciting new cause, which, as Stephens put it, "offers an avenue to worldly glory and post-worldly sexual bliss."

Instead of proposing a liberal alternative, the United States seems to be apologizing. Statements explaining away the actions of ISIS with lack of job opportunities or poor governance can be used to justify genocide. But the strongest indication that America has entered crisis-mode is that it can no longer make its case.

"We are not standing up for our own values," Stephens asserted. "Instead, we are trying to bend our values and suggest that they are somehow not in direct contradiction with the people who are now speaking for Islamic State." Rather than affirming who we are, we are becoming like those we are not: lacking a moral compass.