At Christmastime, there may be no more divisive element in the parent blogosphere than Elf on the Shelf, the children’s book and keepsake turned holiday phenomenon. In just five years since the Elf debuted, he has become almost as integral to some family’s traditions as trees and Santa.

But for every list of creative ways to display your elf, there is another blogger who is fed up with the little guy. The leader of the latter camp is "Jen" who blogs at People I Want to Punch in the Throat. While she writes regularly about people or things that irritate her, it was Jen's ode to “Overachieving Elf on the Shelf Mommies” that put her on map last December. It went insanely viral and received hundreds of gushing comments like “Thanks so much for this. I was beginning to feel as though I was a bad mom for not doing the whole Elf on the Shelf bit.”

Now, following up on the theme that struck a chord with so many readers, Jen has published “Spending the Holidays with People I Want to Punch in the Throat," a book of more angry rants about the holidays.

"I think the holidays bring out the best and the worst in people. Sure, it's a time to get together with friends and family, but that just adds to your stress level," Jen told HuffPost over email. "I blame Pinterest and Facebook. Everyone is so busy competing for the best Christmas lights or baking (seriously, the baking? Do we ever bake in the summer time?). There are all of these parties and obligations and half of the time you don't really want to go, but you have to."

Humor is Jen's antidote to the mania, but we can confirm that she is far less threatening (but no less hilarious) in person than her blog's name suggests. She remains anonymous and uses pseudonyms for her kids (“Adolpha,” 5, and “Gomer,” 7) to protect her image -- and continue fighting the good fight against Overachieving Elf on the Shelf Mommies everywhere. To that end, she has agreed to let HuffPost Parents republish the post that started it all.

Read it for the first time or enjoy it all over again, then let us know what your elf is up to this holiday season in the comments.

Overachieving Elf On The Shelf Mommies

By now we have all heard of the adorable little Elf on the Shelf. Almost everyone I know has one. Some people even have two! (Now I'm having guilt for not having two, because apparently, I need two because when my kids are adults they'll each want one from their childhood. Ugh. Not looking forward to that conversation with the Hubs when I tell him why we need another Elf.)

The Elf is a handy little thing to have. The little bastard keeps my children in check this time of year. When there is even a HINT of rebellion all I have to do is say, "Elf" and they snap back in line.

"If he's so good, Jen, then why did you call him a bastard?" you ask. I called him a bastard because even though my children think he's magic, I'm the one doing all the "magic" and I totally suck at it. I forget to move him all the time and when I forget I have to spin even MORE lies than usual. ("No, Santa can't give you the $400 Lego Death Star. Even though he says he makes everything, he can't make Legos and he has to actually go and buy them and he can't spend that much money on you," or "Well, I don't know why he gave it to your friend last year for Christmas. I'm sure his mommy and daddy paid Santa to do that and we don't pay Santa." Thanks a lot, asshole parents who gave their kid the Death Star from Santa! As parents, let's all make a pact that any gift over $200 comes from grandma and grandpa rather than Santa, OK? It would make my life a lot easier.)

But back to our Elf. Our Elf has been a lazy SOB this year. He usually makes his first appearance Thanksgiving night (I get him out when I'm on my way out at 3 a.m. for Black Friday). This year we left town and I forgot. He waited until we came back and then he was ready join our family. Since then he's only gone away 4, maybe 5 times. We are always forgetting to move him. And it should not be difficult. I am literally moving him from the top shelf in my kitchen to the bottom shelf and back again. I'm such a loser that I can't even do that right.

I heard some overachieving moms talking one day about how they like to make their Elf do "naughty" things. What exactly does that mean? I asked. "Oh, you know, he bakes cookies in the night and leaves a huge mess for me to clean up in the morning." WTF??? "Yes, or one time last year, he took all the ornaments off our tree! Teeheeehee."

Teeheehee?!! Why in the world would I make my Elf do something like that? I'm the one who has to clean up his mess and redecorate my tree! All so my kid could ooh and ahh over the magic of the Elf for about three minutes until the next shiny object caught their eye? I decided these women were insane.

But then I started listening closer and realized they are not alone. There are entire blogs out there right now dedicated to naughty/fun Elf behavior. People like Danielle over at Blossom Bunkhouse. I read her blog and I got really pissed off. I should have known she'd irritate me when I read her perky-mom-who-loves-to-make-amazing-homemade-memories-with-her-kids-when-she's-not-secretly-downing-Valium-and-Vodka-so-she-can-be-so-damn-perky-and-fun title for her blog. (In case you haven't guessed, I'm proudly unmedicated and I have the mood swings to prove it.)

I wanted to punch her as soon as I read her top two:

OK, seriously? Does she have a clue how much a feather pillow costs? The hell I'm going to destroy it just so I can sweep it up again in the morning!

Or like I have time, desire or resources to make this red carpet entrance for a doll. I can barely get him out of the box and prop him up on the shelf. We haven't even read the book yet this year and she wants me to literally roll out a red carpet for him. When does she do laundry? When does she work? And most importantly, when does she sleep?

20. Make faces on school pictures with a marker.

I lecture my children constantly on appropriate materials to write on with markers. A photograph is not one of those things. It would take years to undo that damage if I did that. I'd have mustaches on every photograph in my home. "The Elf did it!"

Yeah, I tried that one on my own the other day (didn't even need Blossom's help to come up with that one). The Hubs didn't see him on the couch reading and he sat on him. Kids couldn't find him because he wasn't on his usual shelf. So much for trying to think outside the box... shelf.

32. Switch clothes from one closet to another.

And I do this when? 4 a.m. when everyone is asleep and I'm hauling dresses and jeans from one room to another? And we're assuming my children would even NOTICE I did this.

This is one I would do just to scare the snot out of them. I'd like to perch the Elf right on their sleeping heads and take a picture of that. I could probably whip that picture out in the summer when they're being bad and it would scare them enough to knock it off. I'll bookmark that one.

When I'm not trashing my house with feathers, flour or drawing on the walls, I'll whip up a handmade hat, Psycho.

Huh? Just set him on the table with flashcards? I guess I could do that, but it sounds as boring as my shelf.

...Or source of meltdown at school -- you pick.

93. Sit on toilet OUTSIDE on front lawn -- if you happen to have an extra toilet being stored.

WTF? Who has an "extra" toilet they can put in the yard? Either she's grasping at straws to get to 101 or she's white trash.

He's called The Elf on the Shelf, not the Elf who Skydives, Takes Bubble Baths and Shaves the Dog! Leave him on the shelf so the rest of us slackers don't look so bad. I think I'm just going to lay my Elf on his shelf, tape wires and hoses to him and tell my kids he's in a coma and hopefully he'll recover before Christmas. That should give me some flexibility. 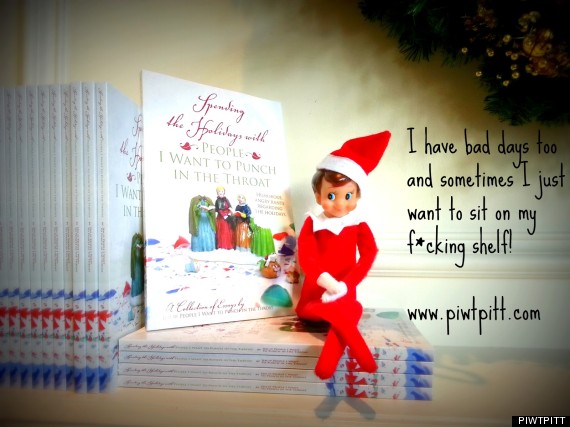 "Spending the Holidays with People I Want to Punch in the Throat" is available on Amazon.

More:
Elf on the Shelfholidays-canadaParentsparents-holidayVideo