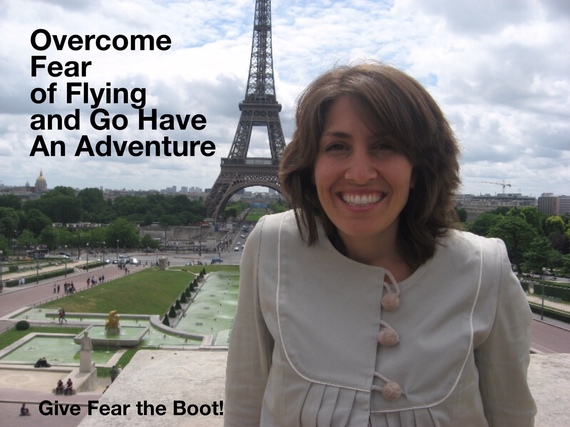 The fear of flying is a pretty common fear, but to me, it was my dirty little secret. I looked at all of my anxiety that way, finding it humiliating to be afraid.

Well, I found out that I wasn't a wimp. And if you are scared of something, I don't think you are a wimp either. I just had to break a habit and I can show you how.

This is what happened.

When I was afraid, I thought about being in a plane crash a lot. A lot, a lot. Every time I heard a plane fly over, the video ran in my mind of myself sitting in an airplane after having just found out we were going to crash.

I had planned a trip from New York to Australia, and for the seven months leading up to the trip, these videos played in my mind.

There I am, in crash position (because after all, I am a rule follower) with all awareness that I was falling helplessly to my demise. And I am. Totally. Freaking. Out. Desperately, frantically wishing I was anywhere, anywhere else but here.

Does this happen to you?

The second common scenario that played back on my internal DVR was crashing and surviving -- albeit for only a few agonizing days -- on a deserted island, injured, with decomposing corpses and more dying people all around me. I feared the time I spent knowing my end was imminent and the fact that there wasn't anything I could do about it. I feared having nothing to comfort me through the suffering, when I was out of my mind in panic.

Daily. For seven months. When I was still on the ground.

"A coward dies a thousand times before his death, but the valiant taste of death but once."

I was virtually dying over and over. Even though I was literally safe, I had to do something to overcome this.

Here's how I did it and so can you:

1. Find Where I Had Control

"Out of Control" is a matter of perspective, so I changed that perspective.

I thought being out of control was a truth. See, it was so obvious that being about to crash as a passenger would mean I was out of control that I didn't question it. But what if this was just a perspective?

I could turn to the person next to me and comfort them, hold them, and express my love and appreciation. I could pray. I could surrender.

This gave me back the power. I had something to do instead of being helpless. Helplessness feeds fear. Action makes you feel in control.

2. See From a Big Picture View.

Geneen Roth, author of Women, Food and God writes, "If you take anything to the end, you'll find God." So in my recovery from anxiety, I needed to take these "fantasies" to the end to see what was there besides the story of fear and suffering.

Ugh! Falling out of the sky, death and decay were not a pretty places to go. How would I find the light there? Where was God in a plane crash?

I invited myself to view these crash scenes from "above the battleground." From this audience position, I was away from the overwhelming chaos of the scenario and I could see it symbolically. Being a person who believes that things happen for a reason and that what matters most is how we respond, this distance helped immensely.

From there, I wondered what might be the point of surviving a crash, injured and dying, watching death and decay around me until I succumbed to death myself. If I saw this experience as merely a step on my spiritual path, then the point of living through this atrocity would be some learning I would extract from the experience. I figured the lesson would be realized in the actions that I took. Some evolvement of my soul could occur as I responded consciously to the situation.

I imagined the choices I could make and the actions I could take in those few days post-crash. I didn't have to just lie there and take it. There were contributions I could make to my fellow survivors such as comforting them, attending their injuries and sharing food. This line of thinking changed my focus to what I could affect rather than what I couldn't. Originally, the fear made me feel completely out of control, but realizing I could respond pacified my panic.

Despite what happens to us, we always have the capacity to respond.

Those pesky images in my head had made me feel worse for months. It was time to take my power back, so I made new videos.

This is the most important action I took.

Several times a day, I set aside time to picture myself in the plane, feeling calm, safe, and laughing. I saw myself having fun on the plane, rather than the image of me panicking. Within a week of practicing this, my fear was completely gone.

I got on the plane to Australia (four flights taking 30 hours to get there), felt well, and ended up laughing at some movies shown inflight! I had created that reality by imagining it.

We can create situations of fear or pleasure by our thoughts, feelings and expectations. Why choose fear?

I have flown hundreds of times since. No problem.

Now it is time for you to have an adventure. Where would you go if you weren't afraid to fly?

More:
how to deal with anxietyhealthy livinggeneralized anxiety disorderanxiety tipsfear of flying
Newsletter Sign Up
An essential daily guide to achieving the good life
Subscribe to our lifestyle email.
Successfully Subscribed!
Realness delivered to your inbox

Anxiety-Tamer, Psychotherapist and Author of "`You 1, Anxiety 0"