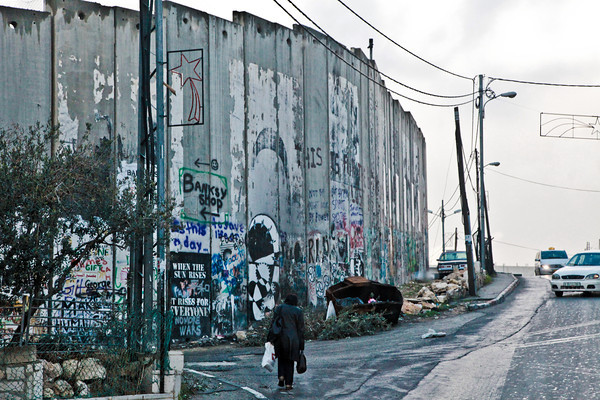 A few short weeks after missiles stopped soaring between the Gaza Strip and Israel, Emory University alumni, faculty and staff ventured over to the Middle East on a continuing mission to build educational, inter-religious and cultural relationships.

"We spoke with Christians, Jews and Muslims, and we saw a yearning for more openness in the discussion about the region's conflict and how to build peace," says Susan Henry-Crowe, dean of the Chapel and Religious Life at Emory, who led the Middle East trip. "One of the things we've learned through this and other experiences is that many of these enduring conflicts are basically not religious conflicts -- there are many other factors driving the issues. In fact, people of faith are often the advocates of peacemaking." 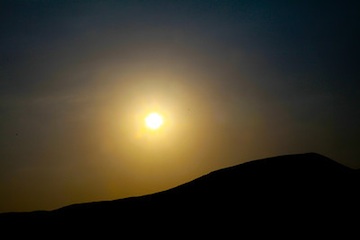 The timing of the trip was additionally weighty because it took place at a potentially pivotal juncture in the region's political future. It came on the heels of the United Nations vote to recognize Palestine as a non-member observer state. It followed the re-election of U.S. President Barak Obama, generally viewed as a hopeful sign for the renewal of peace negotiations between Israel and Palestine, even though the United States voted against Palestine's statehood status. And it preceded parliamentary elections, both in Jordan, where an election boycott was speculated but ultimately did not materialize, and in Israel, where the vote was expected to either strengthen Prime Minister Benjamin Netanyahu's existing coalition or move it toward a more centrist government, the latter of which may be the outcome.

The journey started in Amman, Jordan, where the group had a two-hour conversation with Prince El Hassan bin Talal of the Jordanian royal family about Jordan's role as the "lone country of peace" in the region. He spoke of the pressures Jordan is experiencing from the continuing conflict between Israel and Palestine but also the "mutilation of Syria," which is forcing thousands of refugees into Jordan each day the battles continue. 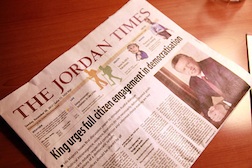 Internationally renowned for his human rights efforts, Hassan says he believes in "one world civilization with 10,000 cultures." His hope is to mobilize change by creating a code of conduct for the region, one that includes religious freedom and socio-economic-political reforms -- a social charter that would not allow any forms of discrimination.

Crossing the border from Jordan into the West Bank at Allenby Bridge, the Emory group had to go through a rigorous security screening process. It gave them a small, first glimpse of what life is like in the region.

"Life in the West Bank appears to have gotten worse for the Palestinians in the last five years. It's looking less like a political standoff and more like a humanitarian crisis to me now," says Wendell Reilly, a member of Emory's Board of Trustees.

Mary Roarabaugh, senior director in Emory's Office of Development and Alumni Relations, agrees. "The Israeli-Palestinian conflict is far more complicated than has been told to the West. It is no longer just a simple place for the Jewish people to be free but a place where some Israelis are behaving in ways that those in control have sometimes behaved against those without power and control."

One of the trip's most compelling stories is that of Daoud Nassar, a Christian Palestinian who is struggling to hold onto the farmland his family has owned since 1916. His 100-acre terraced hill grows olives, figs, grapes and almonds, but the Israeli government declared it "state land" in 1991 so they could build settlements -- communities that resemble high-end gated subdivisions and offer luxurious living, including swimming pools. 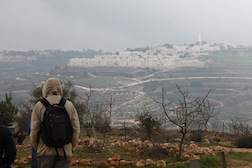 Nassar took his case to Israeli court, where it has been tied up for more than 20 years. During this time, he has withstood tremendous physical pressures and threats. Israeli authorities will not allow him to build structures on his land or have running water or electricity. Israeli settlers who live on the hillsides surrounding him have cut down 250 of his olive trees, placed huge boulders in the road to block access to his land, and used guns to intimidate his family.

Pitching a Tent for Peace

Israel-Palestine's Christian population has declined from 20 percent at the start of the 20th century to less than 5 percent today, but Nassar isn't leaving. How does he cope? He started a peacebuilding organization called the Tent of Nations that brings together people of all religions, cultures and nations -- even a Jewish settler -- to talk about their differences and solve problems, starting with how to keep the farm operational and survive as human beings under these conditions. 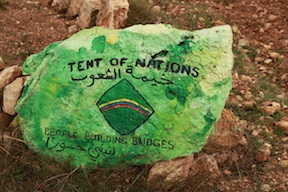 According to Nassar, after he and the Jewish settler spent time together, the man moved out of the settlement and returned to the Tent of Nations as a volunteer, where he and other volunteers have worked together to replant olive trees, create a rainwater collection system, set up solar panels, build compost toilets -- and renovate caves since even tents aren't allowed on the land.

The group met with Nassar inside one of the caves. "I got an image of courage, resilience, creativity, hope and deep, deep faith," says Elizabeth Corrie, assistant professor of youth education and peacebuilding at Emory's Candler School of Theology. "He is resisting oppression nonviolently, and out of his faith. Would that more Christians lived out of this steadfast hope and love of enemy -- we might actually deserve to be followers of Jesus."

How Israelis and Palestinians share land -- and ultimately learn to live in peace -- is the prevailing issue underlying all of the group's meetings with local people. One of the most

visible signs of this struggle is the "wall of separation," a 25-foot high cement barrier the Israeli government started building in 2002 to prevent the uncontrolled entry of Palestinians into Israel. According to B'Tselem, an Israeli human rights organization, 85 percent of this 709-kilometer wall will run through the West Bank when completed.

Throughout the trip, the group was told that since the wall has been constructed, attacks from the West Bank into Israel have diminished. Yet the wall, and the Israeli settlements, have chopped Palestinian communities and farms into "Swiss cheese." 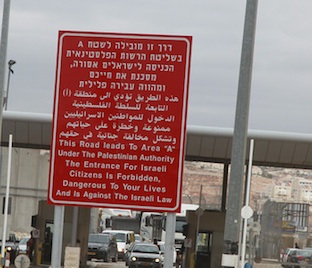 Both Israelis and Palestinians are "prisoners" of this wall. They all must go through checkpoints, some of which resemble entrances to high security prisons, to get to the other side, whether for work, to farm their land, to be with their families, to get to the hospital or to visit sacred holy sites. But it is most difficult for Palestinians because they are issued identification cards that specify where they can and cannot go.

The group asked Rabbi Naamah Kelman-Ezrachi, dean of Hebrew Union College in Jerusalem and the first female ordained rabbi in Israel, her thoughts on the separation wall.

Expressing her personal opinion as an Israeli citizen, she says, "There's the official government line, that since we have it, there's less terror. And there is [less terror]. But is it because of the separation barrier or the Palestinians understanding it wasn't getting them anywhere in world opinion and they were paying too high a price economically? The truth is probably somewhere in the middle," she says.

Yet, she continued, "There are some places it's so horrendous and so awful, it makes no sense. Villages cut in half. In my view it can come down, and it will have to come down at some point. But like many of the matters in Israel-Palestine, it's not black and white." 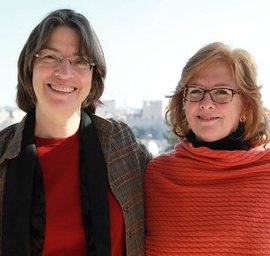 Kelman-Ezrachi (pictured, left, with Emory Chaplain Susan Henry-Crowe) is more certain that dividing Israel and Palestine -- the two-state solution -- is the "only viable" approach to peace.

"But having said that, how one draws the maps is creative geography. Will it ultimately involve tunnels and bridges? Maybe. Can Gaza and the West Bank be one state of Palestine? I believe Jerusalem should be shared -- I do not have total exclusive claim on Jerusalem at all," she says.

Living in the 'Cradle of Hope'

Later that day, when the group visited Yad Vashem, the Holocaust museum in Jerusalem, the almost unspeakable irony of this complex conflict became clear. At the beginning of the exhibition is a quotation by Kurt Tucholsky, a German-Jewish essayist, that says, "A country is not just what it does ... it is also what it tolerates."

"The quotation immediately brought to mind the stories we were hearing and witnessing, one after another, from Palestinians," says Jay Godfrey, an alumnus who is a seminar designer with The United Methodist Seminar Program at the Church Center for the United Nations.

"The restriction of movement, different identification cards, inability to own a passport, displacement from land and the isolation of Palestinian towns and villages -- these conditions have some historical parallels," he adds.

Despite the intense frustration, the pervading fear and the growing injustice, hope endures.

The group heard it in the confident voices of Muslim, Jewish and Christian teenagers who are working for interfaith understanding as part of an organization called Kids4Peace. 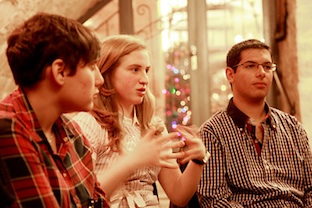 "When we have families of our own, we'll have the peace already built inside us, it's already running through our veins, it will be much easier. We'll start having young ones and inserting the peace seed in them," says Hagop Sivzattian, a Christian Palestinian who also has attended Candler's Youth Theological Initiative.

The group also felt hope in the presence of the mayor of Bethelem, Vera Baboun, when she said, "To be realistic is to be pessimistic, but since we live in the cradle of hope, we have optimism."

And the group saw hope in the grace of alumnus Peter Nasir, a restaurant owner in the West Bank, who says his Jewish friendships at Emory "got rid of the hate in my heart."

Hopeful realizations began to spread within and out from the group upon their return to the United States. Reflects alumna Kassa Elliott, a budget analyst in Emory's Office of the Provost, "How is it that when people get together one-on-one, such as Daoud and the Jewish settler, or Peter and his Jewish Emory College roommate, where they are able to talk and exchange ideas, that friendships develop and cooperation occurs?"

Says alumna Alexis Simpson, "My friends and family have helped me realize that by going on the trip and coming back to talk with them about it, I have become another global citizen working for peace. By telling the stories of the people we met and by verbalizing our own changed perspective, the world will be a better place for us, for those we encounter, and perhaps for our friends in the Middle East."

A version of this article originally appeared in Emory Report newspaper.