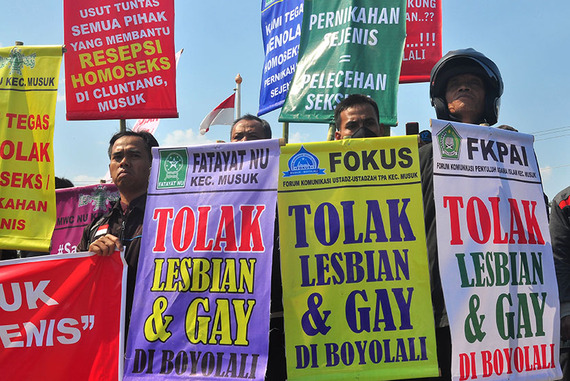 Since the legalization of same-sex marriage by the US Supreme Court, Lesbian, Gay, Bisexual and Transgender (henceforth LGBT) issues have also attracted attention within Indonesian society. The recent discriminatory statements from some Indonesian public officials and politicians show that the national debate on this subject has reached an unprecedented level. In addition to categorizing LGBT persons with child molesters or pedophiles, the opponents of LGBT persons also allege that granting the community such rights will potentially convert heterosexual persons to become homosexuals, and hence, demand the legalization of same-sex marriage. On the other hand, the proponents of LGBT issues argue that LGBT issues are part of human rights discourse that should be protected by the State. By using a more secular approach, they urge the government to address the basic rights of LGBT persons, despite the religious values strongly embedded in Indonesian society. 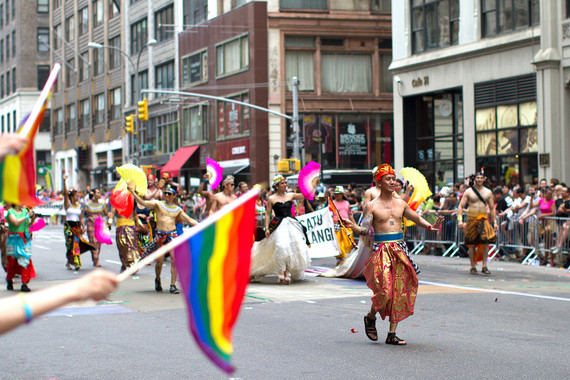 We believe in the universality of human rights; it is non-negotiable. However, in the current situation, that using LGBT rights discourse to defend our position potentially incite greater backfire from the politicians, public officials, and even general public who still has inadequate knowledge on sexuality. Religious norms are still strong attached in the society. Therefore, I wrote this short essay as a short reflection and proposal of how we, the LGBT Indonesians, should move forward with our initiatives to improve the welfare of LGBT persons here.

In Indonesia, as a predominantly Muslim country, human rights issues are oftentimes deemed as 'secular Western values'. In fact, Jeremy Menchik from The Boston University characterized Indonesia's democracy as Godly, in which religious values and authorities play an important role in determining policies. For example, homosexuality is considered as unnatural and un-Indonesian because it conflicts with mainstream Muslim teachings. Promoting 'gay rights' discourse will likely trigger a backlash from the opponents that would attack the movement from religious perspectives. Therefore, as I am going to elaborate briefly my argument here, exploiting existing cultural norms and focusing more on practical level are two major strategies that might be helpful to sustain the LGBT movements in Indonesia, as I have read different examples of LGBT movements in different countries, which do not always employ a liberal model. Indeed, this short essay is far from perfect, but I do hope that it can give an alternative discourse in mitigating the current anti-LGBT hysteria.

The first key strategy here is to 'exploit' the unspoken tolerance towards differences in Indonesian society. In the Far Eastern Economic Review, Bates, for instance, gives an example of a spokesman from a small mosque in central Jakarta who argued that although homosexuality is forbidden by the Koran, "they are usually tolerated by the community in which they live" as long as there is no problem with the people around them. A journalist friend of mine told me a story of a male-to-female transgender [waria] who lived in her village. She is accepted by the villagers because they find her contributing positively to the village by involving actively in collective work [kerja bakti] of the villagers to develop the village. To analyze this story, I suddenly recall the work of Professor Tom Boellstroff on the notion and importance of achievement [prestasi] in Indonesian society.

Since Indonesian society respects collectivism instead of individualism, the notion of achievement or prestasi would also increase the level of acceptance from the general society. Contribution to the larger society remains a valuable asset to influence people's perceptions of an individual. prestasi, which can come in the form of personal achievement that reflect favorably on one's community, could help Indonesian society to change its negative prejudice against LGBT persons. By succeeding in one's career or contributing positively to people in his surrounding residential area, would help to loosen the association between being gay and the myth of gay sexual voraciousness. Exploitation of prestasi potentially serves as an entry point for gradually obtaining social acceptance. Significantly different from the Western gay discourse overemphasizes identity, this Indonesian model places a greater significance of the achievements and contributions to society, rather than 'coming out as LGBT'.

Same-sex marriage is not politically-feasible either at this stage. However, the Indonesian Penal Code does not criminalize sex between consenting adults above 18 years old. The existing cultural norms that regulate social interaction between men and women can be exploited by the LGBT community to sustain their relationships. For instance, men staying in the same hotel room or house would not usually attract disapproval, compared to the unmarried heterosexual couples.

Legal recognition of LGBT persons in Indonesia will be very challenging to obtain. Some might argue that without the legal recognition of sexual identities, this would restrict LGBT Indonesians from accessing their basic rights, such as having access to basic and public services. In Indonesia's 1945 Constitution [Undang-Undang Dasar 1945], the rights of all citizens to education and to develop themselves through the fulfillment of their basic needs are already guaranteed by the State, regardless of sexual orientation and gender identity. The similar tone also can be found in the National Education Law and the Public Service Law stipulating that both should be conducted democratically, equally and non-discriminatively.

For male-to-female transgender [waria] who are more 'visible' than their gay and lesbian counterparts, the issue bears more complexities. They are prone to be discriminated against in accessing public services. The 2012 regulation of the Ministry of Social Affairs (No.8/ 2012) actually already acknowledges the existence of waria although it classifies them as "people with social welfare problems". Based on this policy, the Ministry vaguely mentions about "rehabilitation" as a solution to reintegrate them into society (UNDP 2014). In A Coincidence of Desires, Boellstorff reports that for many waria selfhood manifested at an early age when they felt completely different from normal boys. They also believe they have 'the soul of a woman since birth'. In short, feminine mannerisms are innately embedded inside themselves. 'Rehabilitation' to convert them to normative gender identity would not address the real problems. The real problems here, the social welfare problems are actually the result of marginalization of waria in accessing the education and employment sectors. Therefore, the focus of the movements can shift from obtaining recognition (which is politically challenging and takes a long time to obtain), to a more practical level that the State needs to provide access and address violence against its citizens, regardless of their sexuality and gender.

On this basis, strategic adaptation of more pragmatic and practical goals is more feasible to increase social acceptance from the general public. For example, increasing access of transgender to formal employment will not only help them to have a more decent living, but will also show that gender and sexuality have no correlation with skills and ability. In addition, exploiting unspoken tolerance and cultural norms will gradually strengthen social inclusion for LGBT persons in Indonesian society, whereby they can 'integrate' fully into general society and eliminate stigma and discrimination. Focus on more practical level to produce incremental changes is more feasible at this stage in order not to trigger greater backlash from the public officials and keep moving forward to improve the life quality of LGBT Indonesians. ***