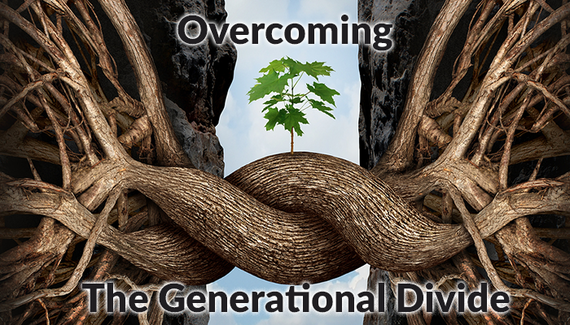 Too often, the younger generation and older generation see each other as rivals. We can imagine that stereotypical notion they each tend to hurl at the other: "They just don't get it!" But this isn't necessarily the case. In fact, it seemingly represents a willful sort of dissociation, a deliberate self-isolation, on the part of both old and young. When faced with what seems to the respective sides like a fundamental divide in understanding -- whether it's a grasp of social customs, language, creative notions like art and music, or technology -- each side digs in its heels instead of reaching toward the center in an attempt to build the sort of mutual understanding both the old and young stand to benefit from. As such, it's become increasingly critical for young people and older generations to see each other for what they are -- the perfect complementary match.

Each group, both old and young, brings to the table skills and insight that, when combined, create positive results, competitive advantage, and a profitable future. So, as technology changes and evolves at an exponential pace and innovation occurs at an unprecedented rate, it's essential to bridge this generational gap for all age groups to truly flourish.

The key to this successful combination is identifying both the strengths and weaknesses of each group. For example, those in the older generation have years of experience and unique knowledge that's been acquired over time. Nevertheless, older workers are less adept when it comes to technological developments. Younger generations grow up with emerging technology and, as a result, have better incorporated into their everyday life. Each generation has a whole different way of experience developments.

For example, I understand emerging technology very well and have been using computers for many decades, yet no matter how hard I try, I don't think like today's 20-year-olds. This was why, in 2009 when I launched a new company that was developing apps for smart phones, tablets, and smart televisions, I coupled my experience, knowledge, and wisdom with 20-year-olds who had an open mind and who knew how to program and apply the latest technology. Together, we created a number of innovative and game-changing apps. Within the first week, our first product was featured in the Wall Street Journal and was the 17th most downloaded app in Apple's App Store, and by the second week we were interviewed on national news programs.

How were we able to do accomplish this? Simple: there was no war between the young and the old.

How can we end this generational war? Recognize that when we leverage the complementary strengths both the young and the old have, everyone wins. The next time you have a high-level meeting at your company, try the following strategy: when you're determining the strategic direction of a product, service, or even your company, make sure some young people are invited to attend. Strategic meetings are typically filled with Baby Boomers. If you bring some younger workers into that meeting to get their perspective, it will show that you are interested in their opinion and that you value their thinking. Plus, you'll get some fresh ideas that you may never have thought of. Then, the word will get out to the rest of the younger people in your organization that there is a future for them to make a difference now and in the future.

In order to get better, we have to learn from each other. So let's end the war between the young and the old now. Let's work together in new and powerful ways and take our organizations into a thriving future together.