Overfishing -- taking fish from our oceans faster than they can reproduce -- has plagued fisheries for decades. South Atlantic red snapper, for example, have been subject to overfishing since the 1960s. Congress first attempted to deal with this problem in 1976 when it passed the Fishery Conservation and Management Act, now called the Magnuson-Stevens Fishery Conservation and Management Act (MSA).

So in 1996, Congress established a 10-year target to restore depleted populations to healthy levels. Unfortunately, the need for firm rebuilding timelines has not been embraced by some in the fishing industry, and they are now pressing Congress to add "flexibility" to the regulations. 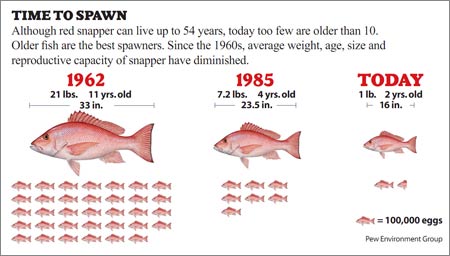 The problem with being too flexible

Fishery managers are required by law to prevent overfishing and to help populations recover so that they increase to a size that will support the largest sustainable catch -- a goal that benefits everyone, particularly fishermen. Therefore, if fishing interests succeed in preventing depleted, yet important, fish populations from rebounding, then we all (fishermen and conservationists alike) lose.

Time and again, we have heard short-sighted calls for flexibility in the timelines for rebuilding overfished populations. Responding to this intensely localized pressure, some members of Congress have introduced bills that would exempt fisheries from certain requirements. These proposals would create loopholes in the MSA and increase fishing pressure on diminished populations, jeopardizing their ability to recover and delaying critical economic and ecological benefits to fishing communities.

Efforts to delay rebuilding plans are not only a bad idea, they're also unnecessary because the law already allows for target exceptions in special circumstances. Obviously, exhausted fish populations could rebound in the shortest amount of time by simply closing that fishery, but this would pose severe economic hardships on fishermen. Therefore, the law uses a 10-year target for most populations to return to healthy levels -- a time period that most scientists calculate is more than sufficient for a majority of fish populations rebound (PDF).

This 10-year target is just that -- a target. In many cases, a fish population can rebound in less time, but fishery managers still may set a 10-year rebuilding goal, more than the minimum needed, to lessen the impacts on fishermen and fishing communities. And on the other hand, if a fish population is biologically incapable of returning to healthy levels within 10 years, fishery managers may use a specific formula to calculate how much time would be needed to restore the population to a healthy size. In those cases, if justified by science, rebuilding timelines can stretch for decades.

Instead of seeking to weaken the current 10-year rebuilding goal in U.S. law, Congress should try to find ways to increase the quantity and quality of data so that we can make the most informed decisions possible. It is science that allows managers the flexibility to adjust management measures to account for variations in the species under federal management.

In my next post I'll explore the economic benefits of ending overfishing and why we can't quit just when the current law is beginning to work.