A powerful video about how overfishing is decimating our oceans reminds us this week to pause and think twice about the seafood we eat.

Created by European environmental coalition OCEAN2012, the video explains that since the advent of large-scale industrial fishing in the 1950s, stocks of large fish -- such as tuna, swordfish, cod and flounder -- are believed to have fallen by as much as 90 percent worldwide. If overfishing continues, some scientists warn that a collapse of all types of fish species may happen in less than 50 years.

Governments and consumers have been complicit in this wildly unsustainable industry, the video asserts -- and it's time that we all collectively take responsibility for the harm we've caused marine ecosystems.

After first going viral on YouTube last year, the OCEAN2012 video has experienced a surge in interest yet again this week after being shared by Upworthy. Renewed interest in the short film is proof that this issue remains as pressing today as it's ever been. 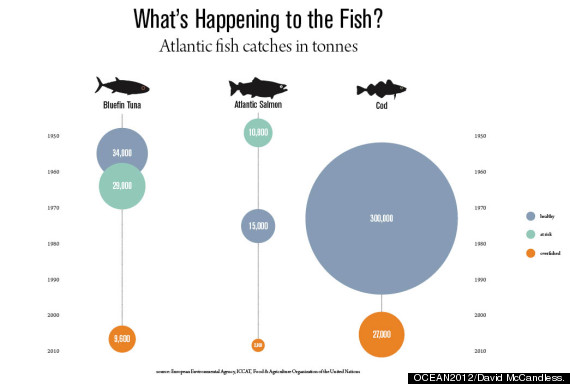 According to environmental group Food and Water Watch, Atlantic cod, Atlantic flatfish (like halibut, flounder and sole), as well as Atlantic salmon, orange roughy and bluefin tuna are some of the worst fish to consume due to their over-harvested, dwindling populations.

Overfishing has caused the stock of bluefin tuna in the Pacific, for instance, to plummet by a whopping 96.4 percent, per a 2013 study on the fish.

On the flip side, Food and Water Watch says that fish like yellowtail snapper, black cod, Atlantic mackerel and pole- or troll-caught Alaskan salmon, Pacific albacore tuna or mahi-mahi are better, more sustainable choices for your next meal. (The organization's "Smart Seafood Guide" offers even more ideas for conscientious consumers.)

Learn more about overfishing and what you can do to make a difference at OCEAN2012's website.