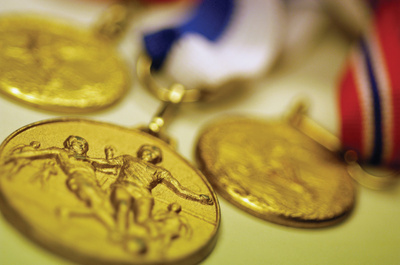 You can do anything you put your mind to!

If anyone tells you that, they're either lying or stupid, or both.

Sure, the idea sounds nice in theory. But in practice it's extremely dangerous.

I'm speaking strictly career-wise. Hobbies do not apply. I have no doubt you would succeed if you put your mind to practicing yoga or mulching your garden or playing the piano. Still, you would not be Bikram Choudhury or Martha Stewart or Rachmaninoff (or, hell, even Randy Newman). So instead of setting your expectations too high (opera singer, astronaut, Olympic athlete), lower them a little. You don't need to become a renowned yoga instructor or international media mogul or famous pianist. This is not defeat. You are not a loser. You are a winner! Because you are smarter than most everyone else who lives in a delusional alterniverse of unrealistic expectations and unachievable goals.

Nothing is impossible. Also a lie. Turns out, lots of things are impossible. Successfully breathing underwater without a regulator. A guaranteed soulmate. The stuffed animals and toy robots that spring to life and dance around to The Heavy's "How You Like Me Now" in that Kia commercial. Time travel. In fact, I'd wager that many things in life are not even remotely possible. Don't get me wrong: This is not pessimism or fatalism or bummerism. This is simply fact. Two words: Pul. Eeze.

Throughout your life, I'm sure you've encountered many people who have an overinflated sense of entitlement. These ding-dongs think the world owes them a favor and that somehow -- for no reason at all -- they deserve to be happier than the rest of us. Well, I'm here to tell them that it doesn't, and they don't. (Careful: These people are impossible, and they are everywhere. Staying away from them will lead you to happiness and inner peace. But, because they're everywhere, it's pretty impossible to stay away from them. See? Another impossibility.)

Many movies, books, TV shows, websites, and self-help gurus preach that if we're good and we believe and work hard that true love and great success and lots of money will find us, and we will fulfill our dreams. This is all true, but only if you're a moron. You know that song "The Impossible Dream" from the musical Man of La Mancha? That guy, Don Quixote, believed that everything was possible, that the impossible dream was worth pursuing. He sang about it all the time in Act I and Act II of his little play within a play. You know what happened to that dude? He didn't get the girl, and fell into a coma. Then he died. There's a reason it's not called "The Possible Dream," people.

Now, get ready, because I am about to share with you the key to a contented existence. Once you understand the following life lesson, you will be much, much happier. I promise.

- Do NOT follow your dreams. Doing so under any circumstances will only lead to wasted years and immeasurable heartache. You will never be President of the United States. However, you can email his office to request a tour of his nice white house. You will never be Tina Fey, either -- but you can audition for as many community theater productions as you like. And, sorry, but you will never, ever be the greatest golfer in the world. (On the bright side, you can cheat on your spouse all the time if you want. So cheer up!)

If you think I'm just a jaded misanthrope who's venting about her own personal failures and missed opportunities, it's entirely possible that you're right. Then again, it's also not impossible that I actually do believe in happiness, contentment, and fulfillment -- just not in misguided people who believe in silly, romanticized ideas, pipe dreams, or Hollywood endings.

This article originally appeared on Blisstree.com.