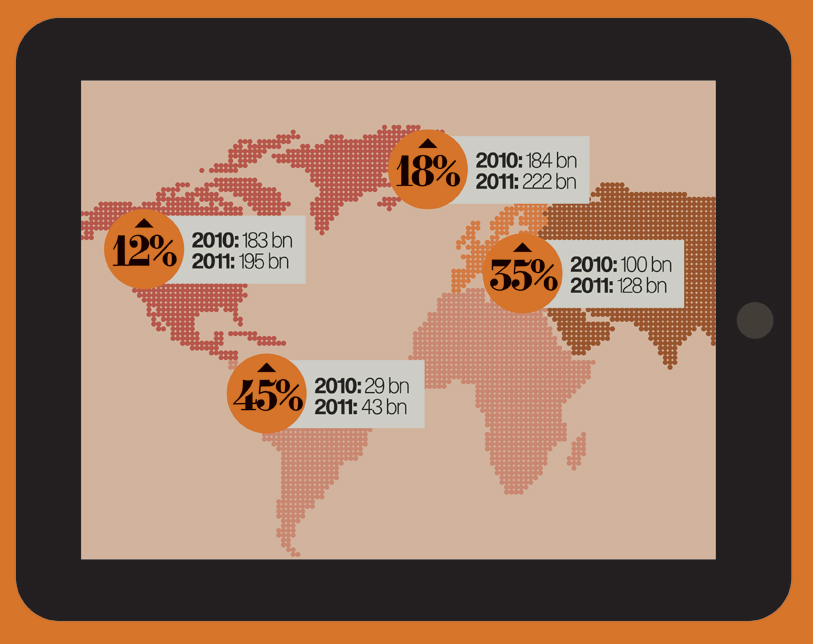 As the UK economic outlook remains gloomy, retailers are venturing further afield to develop international markets. But what is the impact of going global on the UK high street? Miya Knights finds out.

Where domestic retail sales are stagnating, it is easy to see why UK retailers are looking to foreign shores to boost growth. But what does this trend mean for the future of our local high streets? Technology is playing a central role in driving development forward on both fronts.

Luxury firms are perhaps the UK's most successful retail export, capitalising on the value of their brands to supplement slow domestic sales with growth abroad. In itself, this is nothing new. The cross-fertilisation of retail brands across regional markets has also brought us many now-familiar UK high street names, such as Gap from the United States, H&M from Sweden and Zara from Spain.

The difference today is that, while analysts predict virtually flat UK retail sales growth in spite of the usual Christmas boost, many more UK retailers are seeing markedly increased demand in overseas markets which they cannot afford to ignore. Burberry's latest sales figures, for example, grew by 21 per cent in the last quarter of 2011, largely driven by a £210-million (36 per cent) sales boost in the Asia-Pacific region. In contrast, its sales in Europe were up by 20 per cent to £160 million.

Daniel Lucht, research director for retail analyst ResearchFarm, said the lure of internationalisation was due to the impact of "a very austere economic outlook for 2012". This, in turn, has had the effect of generating a huge move away from debt-financed business growth. "Cash flow is going to be a big issue," says Mr Lucht. "For both retailers and consumers, it will be about not what they want, but what they can afford." He adds that the presence of essential infrastructure components, like communication networks and roads, is often a prerequisite for successful expansion, making countries like India challenging for overseas entrants, despite its rapidly expanding middle class.

"Most UK fashion and clothing retailers have piled into the Middle East," says Richard Fitzpatrick, director of Retailmap, a specialist retail analysis and competitor monitoring company. "But that is because of a number of large entrepreneurial firms who build and own their own retail properties." The presence of two or three very strong joint venture or franchise trading partners, such as Alshaya, Al Futtaim and Al Tayer, who provide the UK retailers with a complete turn-key solution - logistics, warehousing and access to the biggest shopping malls - have helped add the region to the UK's list of international destinations, alongside Asia.

Mr Fitzpatrick adds that high-end luxury brands have done well in the Middle East, Asia and also Russia because a growing proportion of their middle classes and super-rich are conspicuous in their consumption. But he says: "The value and budget segment is also probably one of the best UK exports, with the likes of Primark already starting to take Europe by storm. This is where we also see Tesco, George @ Asda, Sainsbury's TUI, Matalan and even New Look expanding."

Across 50 UK clothing and footwear retailers, surveyed by Retailmap in 2011, each traded in an average of 11 separate countries and had an average of six outlets per country. Some retailers had a much wider global exposure. Topshop, for example, is in 29 countries, yet even this UK high street fashion stalwart only averages five outlets per country. By comparison, Tesco operates in nine countries but it has an average of 250 stores per country in each of the grocery and own-brand clothing brand markets it operates in. "It is little surprise that in central Europe, Tesco's F+F clothing brand is one of the market-share leaders," says Mr Fitzpatrick.

"A UK high street chain with 200 or 300 stores is looking for greater economies of scale and efficiencies than any small joint venture or franchise investment can deliver," he says. "H&M, for
example, does 25% of its business in Germany alone." To put Topshop's global presence into perspective against the weak domestic market, its owner Sir Philip Green revealed recently that it was looking to close 250 to 260 stores from its 2,500-strong UK estate over the next three years. This will pave the way for ambitions to expand the Topshop brand further overseas.

The consequences of such strategies do not bode well for the UK high street. The government's recent retail review by TV retail guru, Mary Portas, found less than half the UK's retail spending is now on the high street and that this figure is falling.

But the lure of overseas profits need not necessarily sound its death knell. Technology can help span the miles between head office and the flagship store on the other side of the world, or automate finance reporting and administration with country-specific software rules. But it is the explosion in internet shopping, and its relatively lower operating costs and higher margins that have really been fuelling not only international UK retail ambitions, but also domestic ones too.

But, in some cases, UK retailers like Next are switching their international expansion plans away from opening lots of new overseas stores to setting up foreign language and international currency online shops. Perhaps, if eCommerce was as mature a decade ago, the cautionary tale of Marks & Spencer's experience would not have seen it unceremoniously pull out of its first foray into France, where it had operated 18 stores. Undeterred, it re-launched there last October, but with its first international transactional website, which the retailer said was part of its bricks-and-clicks global approach, preceding the opening of a flagship Paris store a few weeks later.

Success is, in fact, by no means assured abroad or even at home, in stores or online. Just think of the ill-fated Carphone Warehouse and Best Buy joint venture. The US electronics retailer last year ceased trading through 11 Best Buy UK stores, at the cost of some 1,100 jobs. Significantly, services spanning multiple channels, such as click and collect or reserve in-store and deliver to home, are becoming more popular in the UK where internet trade body, Interactive Media Retail Group (IMRG) recorded a significant rise in the percentage of click-and-collect online sales in the third retail quarter of 2011.

Accounting for 10.4 per cent of all UK eCommerce sales in the period, this merging of retail sales channels becomes all the more important in prospective foreign markets that also have a higher proportion of digital natives with multichannel expectations.

Adam Stewart, marketing director of Rakuten's Play.com, predicts: "In the year ahead, cutting-edge mobile devices, worldwide mobile and broadband penetration, and innovative social shopping services will open up global markets, providing huge growth opportunities for merchants large and small, and unparalleled consumer choice." Play.com, one of the UK's largest internet retailers, was recently acquired by Rakuten - the "Amazon of Japan" - for £25 million.

The question is though, will UK retailers be able to keep up? Take Japan, the world's most digitally advanced nation, for example. According to IDTechEx research, 47 million Japanese adopted smartphones with tap-and-go payments functionality in three years, making its adoption of mobile payments technology one of the fastest roll outs of electronic products in history. Super-fast broadband speeds and 4G enable in-store ordering direct from a customer's smartphone, along with localised, targeted promotional offers and the widespread use of Quick Response (QR) codes.

In this way, lessons learnt from going global may also help UK retailers better mind what is at home, despite the fact they may be strategically focused on distant shores.

This article orginally appeared in a special report on The Future of Retail, produced by Raconteur Media and published with The Times (UK). Please see www.raconteuronthetimes.co.uk for further articles from this report.