Your new friend confides something very personal. Do not -- repeat, do not -- second that emotion. Martha Beck on how to manage people who play fast and loose with intimacy.

Boris came to me at the behest of his new girlfriend, Cecily, whom I'd known for years. Since most people dislike being pushed to see any sort of adviser, I expected Boris to be reticent, if not downright hostile. How wrong I was! After a few minutes of chitchat, Boris himself raised a very personal issue.

"I know why Cecily's confused," he said sheepishly. "We've been dating for months, and we still haven't slept together."

"Okay," I said cautiously, not wanting to disrupt a delicate moment.

"You see," Boris said, looking at the floor. "Ten years ago I had a cancer scare. My, um, prostate. It turned out to be benign, but mentally, it affected...you know." Eyes still averted, Boris described his sexual difficulties and the vicious mockery he'd endured from his former wife. I felt terrible for Boris but also secretly pleased that he'd felt safe enough to divulge such personal information.

The next day, Cecily called to thank me. "Boris seems happier," she said. Then her voice dropped. "You know, ten years ago..." She repeated Boris's prostate story, including all the gory details. "I know we have a really special connection," Cecily said, "because Boris shared that with me on our very first date."

Weeks later those suspicions were confirmed when Cecily called me in tears. "Boris hit on my best friend," she sobbed. "After I introduced them, he called her and they talked for hours. He told her about his cancer scare and everything."

I felt myself blush. How many other girlfriends, counselors, taxi drivers, and random airplane passengers had Boris seduced into intimacy with the mournful ballad of his achy-breaky reproductive apparatus? It called to mind Broadway megastar Dame Edna's comment about her (fictional) late husband Norm: "Oh, the years I spent with that man's prostate hanging over my head." Boris, it seemed, whipped out his, uh, issues every chance he got. He wasn't just a sharing person. He was an emotional slut.

Of course, I was less upset about this than Cecily, partly because Boris wasn't my significant other, and partly because previous experience had taught me to recognize and cope with people like him. To help you avoid falling for an emotional tramp -- or, worse, acting like Boris yourself -- I'll give you the same advice I gave Cecily.

But first, maybe I should explain what I mean by emotional sluts: They aren't sexually promiscuous folks who also tend to be moody, like, for instance, every single character on "Sex and the City." True emotional sluts are psychological wolves in sheep's clothing. They consciously or unconsciously manipulate others with displays of openness and vulnerability.

We all have an innate tendency to mirror the level of intimacy presented by others, so when someone confides personal information, we feel social pressure to reciprocate. This can put us in deep social water with people who might simply be enthusiastic swimmers but could also be sea monsters. Experts who study predatory criminals advise wariness when anyone shares too much information too soon. Such people may be using a tactic called forced teaming, pulling others into ill-advised intimacy and gaining information they can use to embarrass, exploit, invade, or control. For example:

During an ordinary water-cooler conversation, Kip's coworker Theresa confided tragic details about her sequence of abusive boyfriends. Kip felt obligated to keep listening and offer comfort. As she confided more, he volunteered stories of his own romantic traumas to help her feel at ease. With all this talk of love, Kip soon realized that Theresa considered their relationship a romance, something he'd never intended. When he told her, as gently as possible, that he wasn't on the market, Theresa did not react well. Kip later learned from a third party that Theresa had been regaling friends with the story of her all-time worst abuser -- him.

Amy was 16 when her 40-year-old soccer coach told her about his depression and anxiety. Amy fell for Coach Greene like Juliet on estrogen, telling him all about her own life, including details about her friends. Their intimacy, while never physical, was so emotionally fraught that Amy's interest in boys her own age evaporated (to this day, she dates much older men). Then a teammate informed her that Coach had not only confided in several other soccer players, the entire cheerleading squad, and a comely female bus driver but had also shared Amy's personal disclosures with others -- comments she had never meant for any ears but his. Coach Greene's emotional sluttiness left her feeling both exposed and jilted, an adolescent heartbreak that still stings many years later.

If an emotional slut manages to hook you, consider yourself lucky if you merely devote time and attention to someone who hasn't earned it, or reveal a few embarrassing secrets. There can be more serious fallout: You offer your heart, making the relationship far more important to you than to the emotional slut. There's also a slim but real chance you could fall victim to a predator who's deliberately luring you into a vulnerable position, gathering information that can be used to control or victimize you. Realizing that someone you trusted intimately sees you as someone to be manipulated is like walking full speed into a glass door: shocking, probably humiliating, and possibly quite painful.

How To Avoid Emotional Sluts

Manipulative people often rope others into games of conversational strip poker by relying on implicit courtesy -- the equivalent of "I took off my shirt, so the least you can do is peel off your socks." Two words: Don't play.

You need preparation to resist this kind of peer pressure. Resolve right now that the next time someone divulges inappropriate details about her sinus-flushing compulsion or aberrant body hair, you'll resist the impulse to feign polite interest or share something equally intimate. Instead you'll say, "Oh." That's all. Then maintain silence. If possible, walk away.

This simple approach is amazingly difficult, partly because our therapy-soaked, tabloid-reading, reality-TV-watching culture encourages emotional intimacy in many contexts. It's easy to join in the exhibitionism, putting yourself in bad company.

How to Recognize a Descent Into Slatternliness

My primary care physician, a woman I'll call Dr. Pearl, is right out of Grey's Anatomy. Lovely, humane, and concerned not only for her patients' physical health but for their overall well-being, she's almost too good to be true. Sadly, I know she probably braces herself every time I visit her.

You see, before my first get-to-know-you physical with Dr. Pearl, I was instructed not to eat or drink, lest I mess up my blood tests. I also knew I'd be subjected to the most agonizing of all medical tests: the weigh-in. So perhaps I fasted longer than technically necessary, avoiding even water, which is really heavy.

My memory of that appointment is kind of blurry, but I believe that when Dr. Pearl asked me about my stress levels, I began compulsively describing everything that ever happened to me in my entire life. Dehydration and low blood sugar turned me into a disclosure train with no brakes. Somewhere between discussing my dread of developing gas during yoga and my detailed description of my childhood hometown (which, in my defense, was rumored to boast of the world's highest per capita consumption of both chocolate doughnuts and antidepressants), Dr. Pearl politely mentioned that therapy was an excellent place to discuss such issues. Well played, Dr. Pearl.

Hours later, filled with chocolate doughnuts, fluids, and horror at my own behavior, I swore to make something positive come from my shameful exhibitionism. I reviewed the appointment mentally, paying special attention to the moment I knew I'd gone too far (sadly, this was very early in the conversation). In hindsight I realized it was the moment Dr. Pearl had flashed a certain micro-expression, basically the nonverbal equivalent of the word oy.

How to Read Lips (And Eyes, and Foreheads...)

If you've never heard of micro-expressions, it's time you did. They've been famously studied by Paul Ekman, PhD (the real-life model for Dr. Cal Lightman of the show Lie to Me), who found that all humans display the range of emotions with identical facial expressions. Even when we're trying to be inscrutable, our true feelings involuntarily flash across our faces for about a fifth of a second: a micro-expression.

Most of us aren't aware of other people's micro-expressions, though we see them subconsciously. To evaluate your ability to read these expressions, take the cool Web-based test at Cio.com. Not only is it fascinating, it underscores the fact that we can train ourselves to see and read micro-expressions. This, I concluded after my shameful doctor's appointment, is a skill that can help us all avoid becoming emotional sluts.

Try this exercise: Imagine that your grandmother is visiting (from Detroit, Bosnia, the afterlife, or wherever). She takes a prescription sleep medication that, according to the manufacturer, "can cause amnesiac sleep housekeeping in rare cases." During the wee hours, you awaken to find Nana, stark naked, at the foot of your bed, folding your laundry.

Picture this vividly, allowing your face to do whatever it wants. Good -- now, freeze. Memorize your expression. Study it in a mirror: the widened eyes, the wrinkled nose, the head pulled back like that of a startled heron. This is the reaction of a person who's receiving Too Much Information. Remember it!

If you do this, you'll notice far more accurately when someone flashes a warning that you're overexposed. Even if the micro-expression is so fleeting you don't see it, your gut will shout, "Danger! Turn back!" Promise yourself that ifthis happens, you'll immediately say, "But enough about me! What about the weather we're having?" This preparation can save you from behaving like an emotional strumpet -- even in situations where you're disoriented by the threat of, say, a weigh-in.

Emotional intimacy is one of the greatest joys of human existence. Still, it's best to let it develop gradually, with each party revealing more as confidence and mutual trust increase. If I sound like your grandma (before she went on that crazy sleep medication), so be it. Old-fashioned caution can preserve your reputation, dignity, and self-respect, so slap on that emotional chastity muzzle by practicing your micro-expression skills and conversational deflections until they're practically reflexive. Then, when an emotional slut pressures you to go too far, too soon, you can save yourself for someone who deserves you more.

Beware The Overshare: Why You Shouldn't Always Open Up
Celebrity TMI Moments 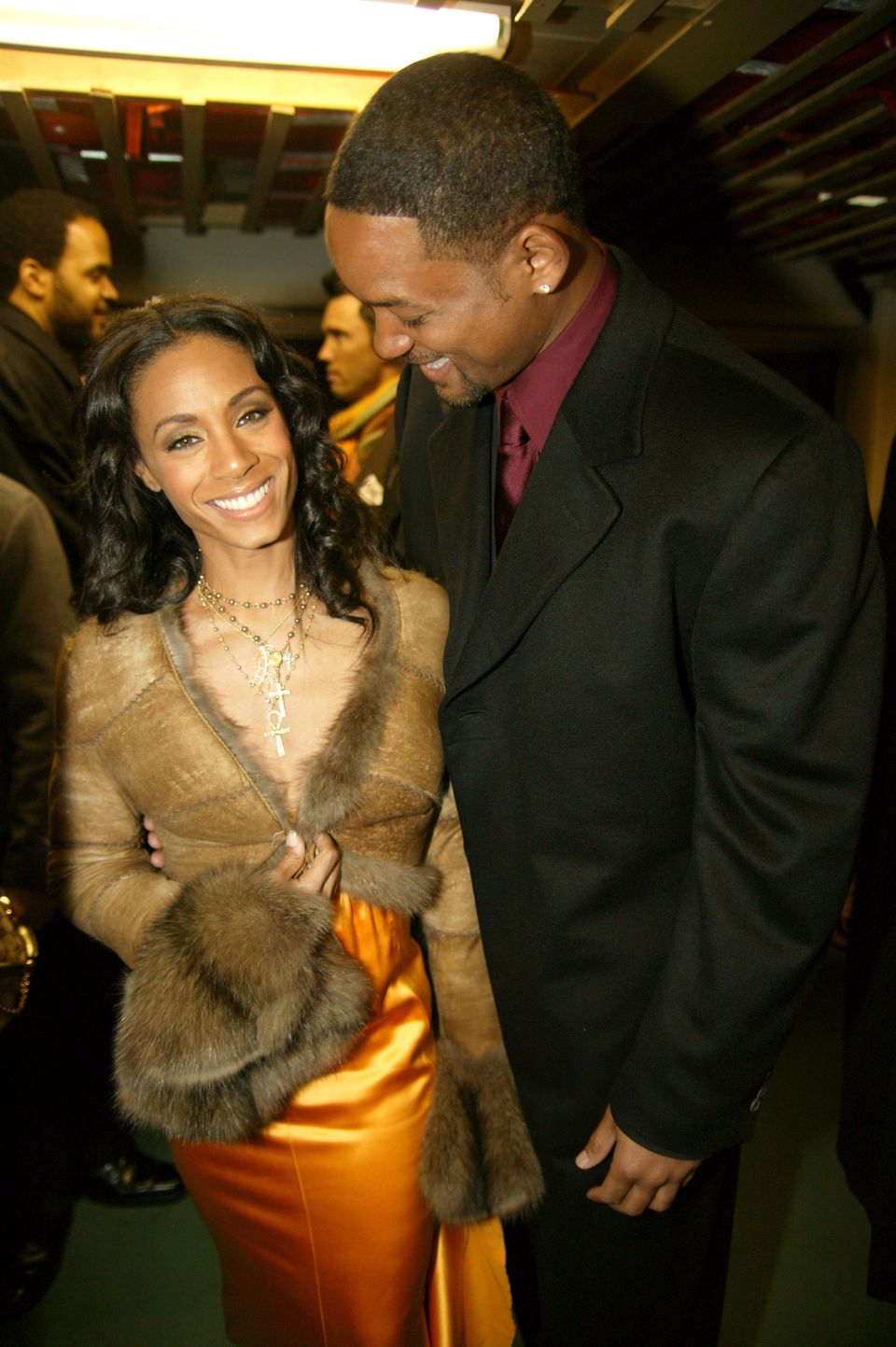 1 / 83
Jada Pinkett Smith
This <a href="http://omg.yahoo.com/news/rihanna-admits-she-likes-spanking-other-celebrity-tmi-20110406-181700-559.html" target="_blank">interview in 2009 </a>sums it up: "When you have three kids, you've got to take your opportunities when they come. In a limo, on the way to the Academy Awards this year, Will started looking at me in this way that drives me wild. We started kissing passionately, and the next thing I knew, well, let's just say we missed the red carpet and I ended up with almost no makeup on," Pinkett-Smith said.
Getty