Oxblood sounds like a Biblical plague and/or conjures up an image of a hemoglobin-rich animal fluid, but, no, this is simply a fabulous fall trend! In a sense, this is entirely emblematic fashion's cyclical nature. It's not just red, it's the new, cool red -- like an emo cousin of burgundy. Just one wiki could overwhelm a reader with more suggestions for varieties of red than there are ways to tell someone you love them -- and, in some semiotic Barthes-ish way, doesn't red even symbolize the complex notion of love itself? Maroon, auburn, crimson, vermillion, scarlet, etc., but oxblood is the color of the moment. Ready or not, it's appearing on runways and sidewalks alike. It seems imperative to explore the evolution of red and its implication as a color. 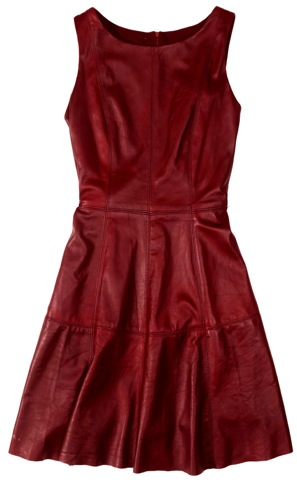 Psychology Today yields several notions about the emotive power of red -- ranging anywhere from happiness to anger and, of course, love. Think of the power one yields by sporting oxblood booties down the street. One comrade might observe the notion of Communism evoked through the trendy shoe, a romantic may recall Valentine's Day after observing a cherry-colored leather jacket, Republicans could acknowledge Romney at the sight of a red tie and some classy individuals may recall this very column with a ruby sweater... unlikely but an author might dream, right? Perception is infinite, and oxblood is just one of many versions of red that might inspire an array of emotions.

Perhaps this reemergence of a basic color has a lot to do with the culture we consume generally. Look no further than this year's New York Times best-sellers list to represent a sampling of prevalent thought. Maybe oxblood has spilled onto the scene due in large part to the popularity of Fifty Shades of Grey. Think of our cultural Zeitgeist at the moment -- this book showcases brutal, sexual encounters and red has been shown to catch the eye of men. Why couldn't its pseudo-violence infiltrate fashion? Bill O'Reilly topped the best-sellers list this year with two aggressively titled books: Killing Lincoln and Killing Kennedy. Need we assassinate this insinuation further?

I personally have a very contradictory relationship with red. On one hand, I believe red lipstick is classy, red high heels are undeniably sexy and red nails go with everything. This is the red that I associate with Valentino, or the delectable color of a strawberry or a freshly picked rose.

However, red also represents a plethora of sports franchises that I'd rather avoid -- or watch lose miserably. When Arsenal and the Miami Heat sport the color, it seems offensive, brash and just wrong. It's the same red that's reminds one of a stoplight or a red card. Isn't it peculiar that one color can incite entirely contrasting emotions?

Indeed, oxblood is a hot trend, but more importantly, it is an interesting Rorschach of perception. So, when you're oxblood-clad and walking down the street, hoping to scream to the rooftops that you're in love, fully supporting Manchester United or simply a fan of Lenin -- just remember that either way you'll be painting the town red.