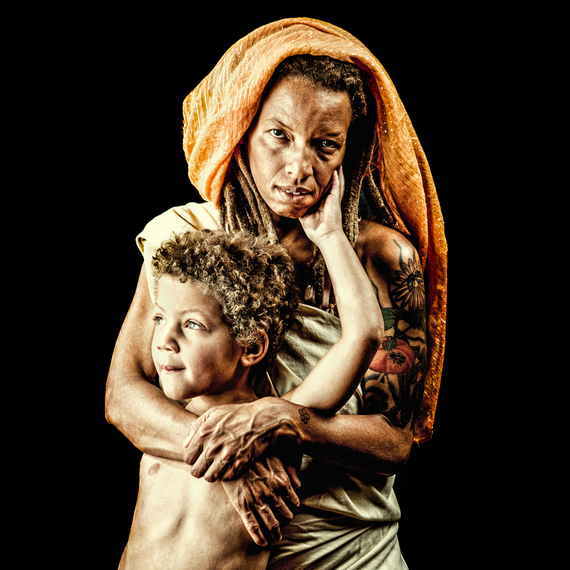 There really is something about Mary.

Catholics aren't the only ones who harbor a measure of devotion to Jesus' mother that can sometimes border on the fanatic. But Mary can be a bit of problem. From the church's doctrinal expectations about believing in the literal virgin birth to the political realities of women's reproductive choices, beliefs and notions about the person and role of Mary are right below the surface in many peoples' subconscious.

Let's consider the plight of Roman Catholic women. The church has set before them the impossible task of emulating Mary. At one and the same time, the two ideals to which they are supposed to aspire in their lives are motherhood AND virginity. Damned if they do, damned if they don't.

However, relief from such impossible expectations can be found by a quick reference to the texts about Mary in the Bible. Paul and Mark, authors of our earliest Christian writings, speak of Jesus as human. Lodged inside Paul's declaration of freedom to the Galatians, there comes a mention of Mary, probably the oldest written reference to Jesus' mother. Paul writes that Jesus is "born of a woman," mentioning this specifically to assure his readers of Jesus' humanity. Jesus had a human mother; so, in Paul's mind, Jesus is truly human. Paul also refers to Jesus in Romans as the "descended from David, according to the flesh" (Romans 1.3) In other words, the son of Joseph (a descendant of David), in a natural, normal conception and birth. It seems reasonable to assume that if Paul had known of any special conditions of Jesus' birth that he would have mentioned them in one of his letters.

And Mark, our earliest canonical Gospel, doesn't even mention the birth of Jesus. Most scholars believe it was because when Mark was written, no one had come up with the miraculous birth stories yet.

Pastor and Jesus Seminar fellow, Culver Nelson, suggests that the idea of the virgin birth was an honest mistake. The author of the Gospel of Matthew used the Septuagint, a Greek translation of the Hebrew scripture, and in Isaiah 7.14 found what he believed to be a reference to Jesus' birth. This has since become a famous passage often recited at Christmas time, "and a young woman will become pregnant." The author of Matthew simply copied it into text as a way of showing that prophecies in Hebrew scripture were fulfilled in Jesus' life. Unfortunately, the Greek translators had made a mistake: they mistranslated the Hebrew word "almah", young woman, as "virgin." There's a perfectly good Hebrew word for virgin, "betulah," that Isaiah doesn't use. So, while Isaiah was talking about a young woman becoming pregnant (a rather ordinary event), it got changed in the Greek to "virgin."

Matthew and Luke were inclined to adopt this language because it was good marketing. They wanted to make sure Jesus was taken seriously as a significant person. New Testament scholar A.J. Levine says:

"Anybody who was anybody in antiquity had to have some sort of miraculous portent when he was born, or she was born for that matter. Divine parentage was extremely helpful. The Roman emperors had it, Plato had it, Asclepius had it, Alexander the Great had it."
(from Living the Questions: the Wisdom of Progressive Christianity)

According to the historian Suetonius, even the birth of Caesar Augustus was divine. His mother Atia fell asleep in the Temple of Apollo and Apollo impregnated her - making Augustus a divine son of God. So, Caesar Augustus was called the Son of God, Lord of Lords, Prince of Peace, Savior of the world. Sound familiar? According to Jesus scholar John Dominic Crossan, if Jesus was going to compete with Caesar, he was going to need an "upgrade" - and virgin birth was the most convenient route.

Far from being some kind of newfangled academic trickery, the very human Jesus has been embraced by countless Christians for centuries. In 1922, preacher-superstar Harry Emerson Fosdick (a Baptist!) preached to his church,

"The two men who contributed most to the Church's thought of the divine meaning of the Christ were Paul and John, who never even distantly allude to the virgin birth." (from "Shall the Fundamentalists Win?")

Even the American Saint, Thomas Jefferson, would be drummed out of many churches for his belief that:

"The day will come when the mystical generation of Jesus by the Supreme Being as his father, in the womb of a virgin, will be classed with the fable of the generation of Minerva in the brain of Jupiter." (Letter from Thomas Jefferson to John Adams, 1823)

But belief in the virgin birth persists. It's no surprise that stake-holders like Pope Benedict refuse to give it up. In his book on the Nativity of Jesus, the now retired Pope basically says, "keep the virgin and ditch the critters." He points out that the solution to Christianity's problems lies in acknowledging that there are no farm animals mentioned in the birth narratives, so we need to stop putting them in our nativity scenes. That way we can focus on our belief in the literal virgin birth - an absolute essential belief to be considered a Christian. Perhaps that kind of persistent programming of people accounts in part for the results of a December 2013 Pew Survey, which revealed that nearly three out of four Americans believe in the virgin birth - even if they don't consider themselves religious.

The refusal (or fear) to acknowledge that what we're dealing with here is metaphor notwithstanding, Dom Crossan points out that even the most committed fundamentalist knows that there's metaphor in the Bible: "We all know that Jesus was the Lamb of God, but nobody believes that Mary had a little lamb."

But what to do with Jesus' brothers and sisters? For some, the belief that Mary was miraculously still a virgin after Jesus' birth is an important aspect of their belief system. The Infancy Gospel of James even portrays Mary being inspected by a Jewish midwife for proof of her virginity after the birth. Not only that, Mary was never to have any other children - and definitely no sex with Joseph! She remained "sexually pure" her whole life. So what do we do with the Gospels that indicate that Jesus was the first-born of Mary and that Jesus had four younger brothers and at least two sisters (cf Mark 6.3)? Since this conflicts with the versions of Mary that venerate her perpetual virginity, Roman Catholics and Orthodox Christians are obliged to hold the opinion that the brothers and sisters of Jesus were either the children of Joseph by a former marriage or "cousins." Evidence is pointed to in extra-Biblical texts that suggest Joseph was much older than Mary - and in a pre-Viagra age, clearly unable to father children.

All supernaturalism aside, there are plenty of faithful Christians who believe that Mary was pregnant by Joseph in the normal human way. Their son, Jesus, was a naturally gifted and charismatic leader to whom later writers gave an "upgrade" to include a miraculous birth, paralleling the conceptions of numerous Greek gods and Roman politicians.

Some might say, "Let's just leave Christmas alone, thank you very much. I don't need to know anything more than what I know." That's fine. But by not delving in to the deeper meanings of the characters and events portrayed, people are being distracted from the political dynamite at the heart of the Christmas narrative. Mary is just one element of the oft-ignored revolutionary aspects of the story. No shrinking violet, longing to be venerated, Mary gives every indication of having the power to stir up all kinds of trouble. In Luke's gospel, when she sings the song we know as "the Magnificat," she sounds like a member of the Occupy movement (or Pope Francis!):

The Lord has cast down the mighty from their thrones,

and has lifted up the lowly.

He has filled the hungry with good things,

and the rich he has sent away empty.

The notion that God may have a preference for the poor and be unhappy with the greed of the rich may seem strangely at odds with the prosperity Gospel many Americans embrace, but here it is again, this time on the lips of the demure and virginal mother of Jesus herself. But most people are spared the cognitive dissonance: the Magnificat is not included in the readings of most Christmas services (the only service many faithful are likely to attend in the course of the year).

Yet the image of Mary as a harmless and pure vessel of the divine is not held by everyone. For some, liberated from the over-spiritualized trajectory of Mary's Immaculate Conception, Annunciation, Virgin Birth, and Assumption, there's the more gritty and theologically provocative notion that Mary was a rape victim. It's not unimaginable that Roman soldiers were just like every other conquering army in history and that rape was a common event in Palestine during the Roman occupation. Throughout history, occupying soldiers have been notorious for their abuse of local women. Mary may have been a local peasant girl assaulted by a Roman Soldier.

It's suggested in both the Talmud and alluded to in the writings of early church fathers (like Origen's "Against Celsus") that Jesus may have been the illegitimate child of rape. The name that is used is Yeshu'a ben Panthera, or Jesus, son of the Panther - not a very Jewish sounding lineage. Granted, the whole "bastard child of a Roman soldier" narrative may have been a rumor intended to discredit the accounts of Jesus' supernatural birth, but it's got deep roots. Suffice it to say, such political and theological posturing is not a recent development - and makes for an interesting spin on Jesus' motivations as an anti-Roman community organizer.

Perhaps it's best to just throw up our hands and exclaim, "Oy veh!" We'll never really know anything about Mary or the true origins of the rabble-rouser Jesus. But the stories people have told in the effort have meaning beyond what most people give them credit. Whether a person feels it's necessary to believe in the stories as being literally true or, on the other hand, full of metaphorical wisdom, the question to ask is: what do the stories mean?

Getting to the other side of the doctrine and dogma that obscures much of the original elements of the narrative allows us to embrace Mary as a symbol of one who is birthing hope in the world. It allows us to see ourselves in the story as those called to follow suit, despite our station in life and despite the hardships. Saying "yes" to the challenge of letting the Spirit of life emerge from us in a way that contributes to the healing of the world sets us on a path, with Mary, of being outspoken advocates of the voiceless and humble bearers of grace. "Oy veh!"