Of all mushrooms commonly consumed, oyster mushrooms in the genus Pleurotus stand out as exceptional allies for improving human and environmental health. These mushrooms enjoy a terrific reputation as the easiest to cultivate, richly nutritious and medicinally supportive. Oyster mushrooms are also renowned for their ability to degrade environmental toxins, particularly hydrocarbon-based contaminants. Their role as guardians of the biosphere becomes clear as new research into their complex biochemistry proves their potential to combat hunger, improve immunity and clean up polluted lands.

For now, I am focusing on oyster mushrooms' important human health-oriented properties. For those interested in exploring their bioremediative -- mycoremediation -- properties, please see Mycelium Running: How Mushrooms Can Help Save the World.

Oyster mushrooms are native to both deciduous hardwood and conifer tree species. Recognized as wood decomposers, they are ubiquitous in forestlands around the world. Fruiting both in the spring and fall, oyster mushrooms, particularly Pleurotus ostreatus and its close relatives, attract cultivators and entrepreneurs for their numerous advantages and unique ecological interactions. Most significantly, nearly all oyster mushrooms are primary saprophytes, meaning they do not require a composted substrate. They grow readily on dead wood, straw, grasses (wheat, rye, rice, fescues, corn, bamboo), cotton, cacti, Scotch broom, hemp, coffee wastes, paper products, and practically any other dried cellulosic plant material. 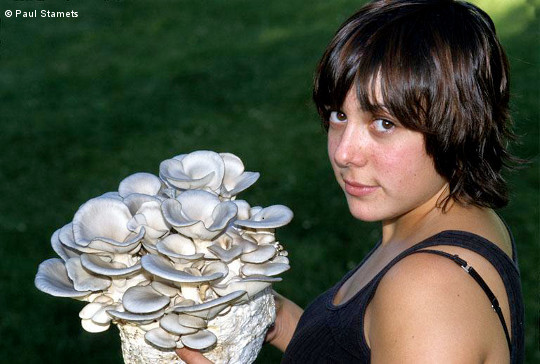 
Cultivators of button mushrooms (Agaricus bisporus, aka portobello, crimini and meadow mushrooms) noted long ago that nematodes (tiny worms that feed on living plant and fungal tissue) -- the bane of their industry -- are not an issue with oyster mushrooms. This fact led Barron and Thorn (1986) to discover that oyster mushroom (P. ostreatus) mycelium is carnivorous -- it eats nematodes. It exudes extracellular toxins that stun the worm, whereupon the mycelium invades its body through its orifices. This may lead gardeners and farmers to one day control these root-crop damaging worms without resorting to toxic pesticides. One U.S. patent (#6,048,714), still in effect, has been issued to Bryan Hiromoto (2000) for products with nematicidal activity based on oyster and other mushrooms.

Following on this discovery of nematode-predating activity, oyster mushroom mycelium was also found to be one of the most adept, of more than 100 tested, at consuming bacteria (Pseudomonas and Agrobacterium) in order to get nitrogen and protein (Barron 1988). This makes sense, considering that in 1950 one of the first antibiotics isolated from mushrooms, pleuromutilin, was found after observing that Pleurotus ostreatus inhibited a wide range of Gram-negative bacteria, including Salmonella and Pseudomonas. More recently, using in-contact antibacterial tests, we verified that exudates from oyster mushroom (Pleurotus ostreatus) mycelium strongly inhibited Escherichia coli and staph (Staphylococcus aureus). Viable cell counts were reduced from more than 100,000,000/ml of water to less than 1,000/ml within 24-72 hours when a 1:1 mixture of exudate and bacterially enriched water were combined (Stamets, 2005).

From dead plant matter to nematodes to bacteria, never underestimate the cleverness of mushrooms to find new food! 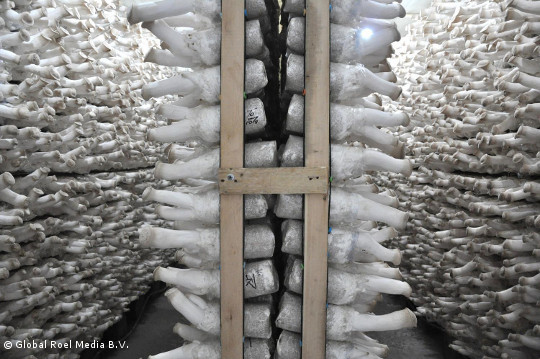 Oyster mushrooms come in many species and forms, but by far the most popularly marketed are Pleurotus ostreatus and Pleurotus pulmonarius. In Asia, Pleurotus nebrodensis and P. eryngii are gaining market share since these thick-fleshed and short-gilled mushrooms have a shelf life that exceeds most species by several weeks. Oyster mushrooms are rich in protein (up to 30 percent by dry weight), plentiful in B vitamins, have no cholesterol, and have significant levels of the cholesterol-lowering molecule lovastatin -- up to 2.8 percent by dry weight (Stamets, 2005; Alarcon, 2003). Because of their native lovastatin content, oyster mushrooms have been studied for their benefits in helping modulate blood cholesterol levels.

Encouraged by preliminary evidence of cholesterol modulation by Dr. Nina Gunde-Cimmeran (1993, 1995, 1999), the National Institutes of Health, through their National Center for Complementary and Alternative Medicine (NCCAM), funded a 2004 study of the effect of oyster mushrooms on anti-retroviral-induced hyperlipidemia in HIV patients. Supervised by Dr. Donald Abrams of the University of California San Francisco General Hospital, the study showed potential benefit from ingesting a tea made from wood grown, freeze dried oyster mushrooms. Although the study did not achieve statistical significance -- in part since all the patients did not complete the specified regimen -- the trends suggested benefit in reducing triglycerides and LDL cholesterol. Some of the patients complained that the simple hot water soup did not taste good and stopped consuming it. Interestingly, in a subsequent analysis of our wood-grown mushrooms -- which were used in this clinical study -- vs. straw grown, the straw grown oyster mushrooms had about 5 percent more sugar, which could have affected palatability.

While oyster mushrooms remain an excellent source of natural lovastatin, their medicinal attributes extend well beyond cardiovascular health. In the International Journal of Oncology, Jedinaki and Silva (2008) idenitified two molecular mechanisms from alcohol extracts of oyster mushrooms that "specifically inhibits growth of colon and breast cancer cells without significant effect on normal cells, and has a potential therapeutic/preventive effect on breast and colon cancer." Moreover, in the same cell culture tests, these alcohol-soluble extracts of oyster mushrooms out-performed similarly prepared extracts from button (Agaricus bisporus), shiitake (Lentinula edodes) and enoki (Flammulina velutipes) mushrooms -- three species more extensively studied for their immune-supporting properties. These mushroom extracts up-regulate genes coding for p53 and p21 proteins, which in turn stop tumors from growing and support tumor regression. Additionally, the non-alcohol soluble beta glucan and glycoprotein complexes found in oyster and other medicinal mushrooms alert the immune system's natural killer and cytotoxic T cells, improving the body's natural anti-cancer responses. For cancer researchers interested in mushroom use in complementary therapies, the possibility that oyster mushroom consumption can improve cancer treatment using distinctly different but synergistically powerful pathways should be cause for serious consideration. Many more mushrooms are likely to activate and up-regulate these genes for coding cancer-limiting proteins. 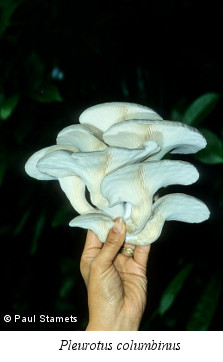 Although oyster mushrooms have been studied extensively and support health in a number of ways, it is also extremely important to always cook oyster mushrooms! Oyster mushrooms contain a novel, heat-labile, hemolytic protein called "ostreolysin," which can be toxic unless the mushrooms are cooked at temperatures exceeding 140 degrees Fahrenheit. This compound is found in developing and mature oyster mushrooms yet is absent in the mycelium. Nevertheless, this is another good reason -- among many -- that all mushrooms, with the exception of truffles, should be cooked to best take advantage of their beneficial nutritional properties while deactivating heat-sensitive toxins.

Now that the line between "gourmet" and "medicinal" mushrooms is sufficiently blurred, what does this mean to you? Clearly, consuming the right mushrooms can enhance health. Oyster mushrooms reign supreme in their multifaceted talents for benefiting humanity.

References Used for This Blog

Gunde-Cimerman N, Friedrich J, Cimerman A, Beni ki N. "Screening fungi for the production of
an inhibitor of HMG-CoA reductase--production of mevinolin by the fungi of the genus
Pleurotus." FEMS Microbiol Lett 1993; 111: 203-6.