September 16 marks the International Day for the Preservation of the Ozone Layer, commemorated as the anniversary of that day in 1987 when the Montreal Protocol was signed, an international treaty created to limit and eventually ban CFCs and other substances that were discovered to have been depleting our ozone. And this year certainly brings cause for celebration.

In the "Scientific Assessment of Ozone Depletion 2010" report, UN scientists announced that the ozone layer in the upper atmosphere has ceased diminishing, attesting to the success of the Montreal Protocol. The scientists say the area of the ozone that has thinned out should largely be restored by mid century, AFP reports.

The ozone serves as an intermediary between the sun and Earth's surface, absorbing ultraviolet light, which can damage the DNA in plants and humans, leading to skin cancer.

The photo below is what the Ozone Monitoring Instrument on NASA's Aura satellite captured on September 12, 2010. The largest ozone hole ever observed was on September 24, 2006. 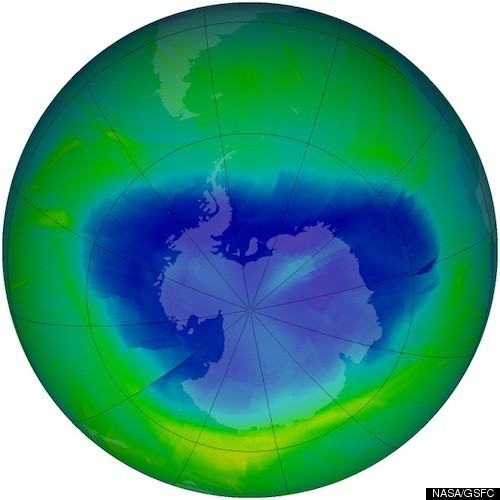