If his goal was to capture attention by tweaking the nose of clean-energy enthusiasts everywhere, Ozzie Zehner might well have succeeded. His new book, published last month and provocatively titled "Green Illusions: The Dirty Secrets of Clean Energy and the Future of Environmentalism," takes on what Zehner considers the sacred cows of the green movement: solar power, wind power and electric vehicles, among others.

Of course, the book is much more than just this, and Zehner, a visiting professor at the University of California, Berkeley's Science, Technology & Society Center, describes himself as being neither for nor against any particular energy source. Indeed, his core objection appears to be with technology fixes in general, or the conviction that any bit of technological derring-do -- be it a high-efficiency photovoltaic cell or a low-emissions vehicle -- will be sufficient to nudge the planet from unpleasant trajectories like global warming.

Such beliefs, Zehner argues, can blind policymakers and other stakeholders to the attending downsides of any new innovation (there always are downsides); to other, arguably less expensive solutions; and to other pressing global problems.

As the basis for thoughtful discussion, all of this is perfectly reasonable. But Zehner is also clearly playing the provocateur here, and it appears to have been a wise gambit, given the sonorous harrumphing the book has generated in green circles.

In a review of the book, Chris Meehan, a contributing writer at CleanEnergyAuthority.com, a solar energy news and information resource, used the terms "alarmist" and "misleading" to describe Zehner's take on solar photovoltaics. Jim Motovalli, an environmental writer and frequent contributor to The New York Times, described Zehner's book as being "out to reach a conclusion -- green energy is bad."

Speaking to Wired Magazine, Nick Chambers, a contributor to Plugincars.com, called Zehner's take on electric vehicles "ridiculous." Writing at the website of the American Wind Energy Association, Edgar DeMeo, a renewable energy consultant, argued that Zehner's book "perpetuates several myths about wind power," that it "suffers from a basic misunderstanding of how the electric power system operates" and "exhibits a sensationalist tendency to bash wind."

Whether or not these and other characterizations are entirely fair in their particulars is an open question. 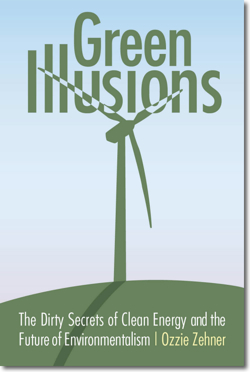 Citing a 2010 lifecycle analysis from the National Academy of Sciences, for example, Zehner concludes that the aggregate environmental damage from an electric car -- that is, accounting for all the costs associated with its manufacture, use and ultimate disposal -- is greater than that of a gasoline car, even if the gasoline comes from the highly polluting and greenhouse gas-intensive oil sands of Canada.

"To my knowledge, this is the most comprehensive study performed on electric car lifecycles," Zehner told me. "And it was co-authored by 100 of the nation's leading advisers on epidemiology, economics and other relevant fields."

Motovalli and others have suggested that more recent research is at odds with the NAS findings. A 2011 lifecycle comparison from the Swiss Federal Laboratories for Materials Science and Technology, for example, concluded that the overall impacts of gas-powered and battery-powered vehicles reach parity only when gas-fueled cars achieve an efficiency of 70 miles per gallon. Practically speaking, that would give a clear edge to electric cars -- for now.

But even if Zehner's citations are dated -- and I'm not arguing here that they necessarily are -- his larger point may well still pertain: That investing in electric vehicle development, which is really simply subsidizing our addiction to car culture, might not be the wisest use of a nation's limited resources, particularly if the immediate benefits are marginal.

"Gasoline cars are expensive and dirty. They kill tens of thousands of people annually," Zehner said in an email message. "Using them as a benchmark to judge a technology as green is a remarkably low bar. Even if the NAS researchers are wrong, or electric cars someday pass over that bar, electric vehicles will have trouble stacking up to the broader array of transportation options at hand."

Such options might include better urban and neighborhood planning to improve traffic flow, and to encourage walking and bicycling, Zehner said, or carefully targeted improvements to the existing car fleet. If city leaders wish to reduce urban smog, for example, they might well recognize that 80 percent of it flows from just 20 percent of the vehicles experiencing poor combustion, Zehner said. "Remote monitoring stations can identify those cars and get them to the shop," he added. "That's far less expensive and more effective than subsidizing a fleet of electric cars."

Of course, these sorts of policy interventions won't be easy to implement, Zehner concedes. But they are even harder when all the focus is on electric cars.

With wind and solar power, Zehner finds similar problems. "I am fully aware and accept that a solar cell can yield less CO2 than burning a chunk of coal for the same amount of power," Zehner said. "My critique comes when you take a step back and look at the technology in context." That context includes, for example, more exotic but also more potent greenhouse gases associated with the manufacture of solar arrays, and the fact that you need a lot of solar panels to replace the power output of a coal plant.

Does that mean Zehner is anti-solar? He says no. "In my mind, 'Green Illusions' does not throw these technologies under the bus," he told me. "It just situates their full effects in context and shows how we could address the context to make these technologies more relevant."

"Alternative energy is not a free ride, just a different ride," he added, "and there's no reason to believe it will offset fossil fuel use in a society that has high levels of consumption and is growing exponentially."

Put another way, renewable energy only makes sense if undertaken in concert with other, more fundamental changes in the way we deploy and make use of energy in our everyday lives. At the moment, we're really paying attention to the technology end of things, Zehner argues, and without a holistic approach, these innovations get us nowhere.

He points, by way of example, to the wind industry and its supporters, who assume that wind turbines offset fossil fuel use. Zehner's own analysis -- as well as research recently published out of the University of Oregon -- suggests that there is little evidence to support that.

"It's what I call a boomerang effect," Zehner said in an email message. "When we subsidize wind power or any other energy technology, this exerts a downward pressure on energy prices, and demand subsequently strengthens. We return to where we started -- with high demand and so-called insufficient supply. Taller or more efficient wind turbines are just another way of throwing [the boomerang] harder."

Does this mean that Zehner thinks wind power is pure folly? Again he says no. "Technology development alone won't solve this problem," he told me. "Rushing ahead with wind development now, as the AWEA advocates, may make our energy and climate problems worse. We'll need backstops and other non-technical innovations to make wind power really count for something in the future."

So what are those non-technical innovations? Women's rights is perhaps the most jarring one in a tome otherwise occupied with megawatts and carbon counts, but it sits at the bedrock of Zehner's overall thesis: that consumption -- how we consume, or how much we consume, and not so much what we consume -- is our real problem. "[W]omen who are educated, economically engaged, and in control of their own bodies can enjoy the freedom of bearing children at their own pace," Zehner writes, "which happens to be a rate that is appropriate for the aggregate ecological endowment for our planet."

Of course, navigating such politically and culturally charged territory as population management is no simple matter, Zehner concedes, but the larger point is impossible to dismiss. So, too, are other areas that he thinks are given short shrift in green circles: curbing sprawl, rethinking neighborhood design, emphasizing walkability and bicycling, creating more energy-efficient architecture, taxing consumption over income, and otherwise redefining our notions of comfort and community.

It can easily be argued that activists in the environmental movement are already focused on many of these issues. Perhaps for Zehner there just aren't enough of them. Or perhaps he's simply throwing punches at a straw man. As one commenter at Plugincars.com put it: "He's simply using one of the oldest promotional tricks ever created. You find popular topic, product, idea, etc., and simply take the opposite view. You'll always get noticed, talked about, published, interviewed, etc., even if you're completely full of crap."

I asked Zehner about this point. "I understand why people might be suspicious about a critique of alternative energy given the political climate," he said, noting that his book is nonetheless published with a nonprofit imprint (University of Nebraska Press), and that all royalties from its sale are being donated to the sort of environmental projects the book favors.

That seems a fair self-assessment, although subtitling the book "The Dirty Secrets of Clean Energy" was almost certain to generate heat among a wider circle of critics, and it strains credulity to believe that Zehner and his editors and publishers weren't well aware of that from the start.

Still, it would be a shame if that stratagem ultimately prevents more people from dispassionately exploring the book's broader arguments, which are important and relevant -- even for those who might disagree with the particulars.

"Perhaps," Zehner said in an email, "it's worth reconsidering how to speak with a broader audience."