By Katy St. Clair, PDS volunteer
Lisa grabs a big handful of packaged tights from the back room and then heads out to the sales floor. She knows exactly what to do and how to do it, because she has worked at Banana Republic now for 15 years. Lisa has Down Syndrome. The only trouble she faces with her disability is differentiating between the patterns on the black hose, something that even her job coach has a hard time doing. "Ah," says the job coach, "hold it up to the light a bit, see that pattern? It's faint..."

Lisa holds it up and squints. "Got it!" she says. She begins to lay each kind out in piles on her work station. From there she carefully places each variety on its respective peg. It quickly becomes apparent that it's not as easy as it looks. Some are on the wrong rows, some have packaging that is ripped, some are in the wrong part of the store entirely. For a woman with Down Syndrome like Lisa, this isn't insurmountable; it will just take a bit more time.

"Hey girl!" says her coworker, smiling broadly and stopping to chat about the upcoming weekend. "Got any plans?"

"My nephews are coming over," says Lisa, "can't wait, dude."

Over by the socks, Lisa's friend since childhood and fellow PDS co-worker Robin is at the same task. "OK Robin," she says out loud to herself. (She talks to herself and speaks about herself in the third person when she is on-task. Well, actually, all the time. It's adorable.) "Ok girl," she continues, "time to get these socks out. You remember what happened last time when you put the green ones where the red ones were supposed to go, right Robin?" Then she giggles and responds to herself. "Yes I remember! That was ridiculous!"

Occasionally Robin's job coach has to try and steer her back to what she is doing.

"So, looks like you have an empty row here, and some up here that go somewhere else..." says her coach, Victoria, trying to figure out the best way to explain a complicated problem like a an entire wall of socks in disarray. Robin stops talking, slowly moves over to them, looks 'em up and down with the clipped movements of a bird, and then in one fell swoop rearranges all of them in record time. 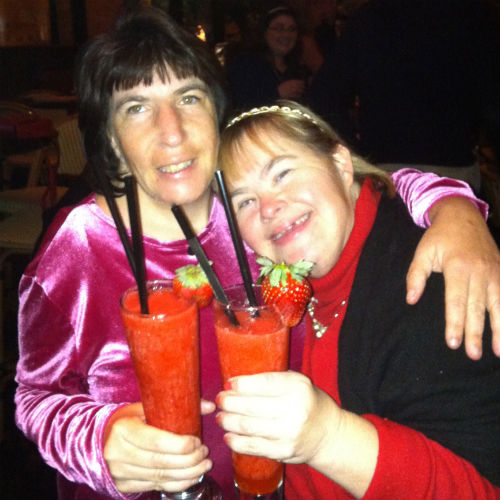 Robin and Lisa met when they were little kids. Now both in their 40s, they are still good friends. They both love listening to Huey Lewis and the News, going out to eat, and of course working together at "Banana," as they call it. They have the bond of growing up together with disabilities in world that is catered to everyone else. Banana Republic has gone out of their way to make them both an equal part of the team, though. "I love my boss," says Lisa. "He's a sweetheart."

"Let's do it, Robin," says Robin. Lisa looks at her job coach and rolls her eyes. Everyone is used to Robin's eccentricities by now, and life wouldn't be the same without them anyway.

Belts are trickier because they come in different styles that need to be sorted, and then they also need to be hung up by size in descending order on each peg. The two split the job; Robin sorts by type, and Lisa places them on the rows in order by size. Victoria stands back and lets them handle it, checking only when the job is complete. Lisa and Robin joke around with each other the whole time as they work, Robin teasing Lisa by singing a song she hates, and Lisa pretending to be mock offended. Before long the section is packed. Their PDS job coach looks it over and gives the thumbs up.

The women work two hours each shift, which is another way that Banana has accommodated them. Some folks with developmental disabilities will give their all while they are working, and it can wear them out a bit. With the money they earn, however, they can buy nice things for themselves and manage their own money. It gives them more control over their lives. And it's pretty obvious that their co-workers love having them there too.

Before they leave, they make the rounds to all their friends and say goodbye.

Robin suddenly starts speaking to herself. "Why did you say 'bye bye' Robin? You're not a little kid. You are an adult. And adults say "Goodbye...."

"OK, OK", says her posse, gently pushing her out the door.

PDS is solving the nation's job crisis by ensuring that people like JR are valued assets to the workforce.

Please help PDS win the JobRaising Challenge by donating to our cause.