I've never been to the ballet, except for the time I was dragged to the Nutcracker, so I really didn't know what to expect when I attended Pacific Northwest Ballet's Emergence on the recommendation of a friend. Knowing almost nothing, I was particularly grateful for the half-hour Introduction To the Performance by PNB's Education Programs Manager Doug Fullington. 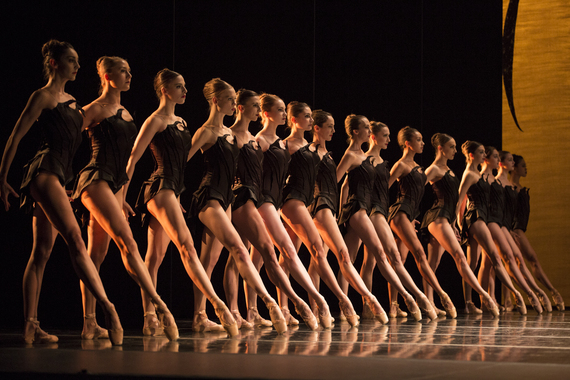 I was also surprised to see less than a hundred people attending that very useful session, as I can't imagine that the nearly sold out crowd knows even a fraction of what Mr. Fullington shared with us. Walking back up the staircase of McCaw Hall, I was actually excited to see the four pieces that made up the performance.

Just as I'd learned in the introduction, each of the pieces was different and unique, but I was particularly taken by the final production Emergence, which felt more like modern dance than classic ballet.

Here's how PNB describes the Emergence:

"A riveting dark-hued work that casts a swarming, scurrying group of dancers, insect-like, in an eerily subterranean universe, Emergence dramatizes through its mesmerizing choreographic attack the ways in which the instinct for creating social forms seems hard-wired into life itself. ... inspiration for the work came from reading Emergence: The Connected Lives of Ants, Brains, Cities and Software by American popular science theorist Steven Johnson and considering parallels between the social organization of bees and the hierarchical nature of classical ballet companies.

Johnson's statement that 'simple agents following simple rules could generate amazingly complex structures' became a touchstone for the piece. ... Sometimes fragmented and gestural, with traces of the isolation and popping techniques of hip hop, Pite's choreographic method was a catalyst for change in the dancer's bodies."

Emergence was quite spectacular and seemed to keep the audience deeply involved with its edginess and genuine talent along with a score that did in fact resemble nature sounds more than a melodic composition. Dancers performed with an extreme athletic skill and grace that leaves one wondering how they do that. Obviously, lots of practice and natural talent is involved.

All in all, PNB's latest production is magical, providing audiences with the perfect mixture of grace and athletic ability along with stunning music. As a novice, I look forward to more. Emergence continues through November 15.