San Diego Comic Con is this week and soon hundreds of thousands of comic book and movie fans will swarm the halls and downtown San Diego. Big things are in store for everyone at the show including lots of coverage for the upcoming film Pacific Rim.

Essentially it's a movie that was made for me. Giant robots fighting giant monsters, what more could I ask for?

I had the pleasure of speaking to Guillermo del Toro, who has directed countless films such as Pan's Labyrinth, Hellboy, Hellboy II, Blade II, The Devils Backbone and Cronos to name a few.

Beginning on Preview Night at San Diego Comic Con on Wednesday, two of the costumes that are worn by two of the characters from the film will be displayed at the Legendary Booth #3920.

Thanks to the folks at Legendary Pictures we bring you the first look at these awesome costumes and an exclusive interview with Guillermo del Toro. 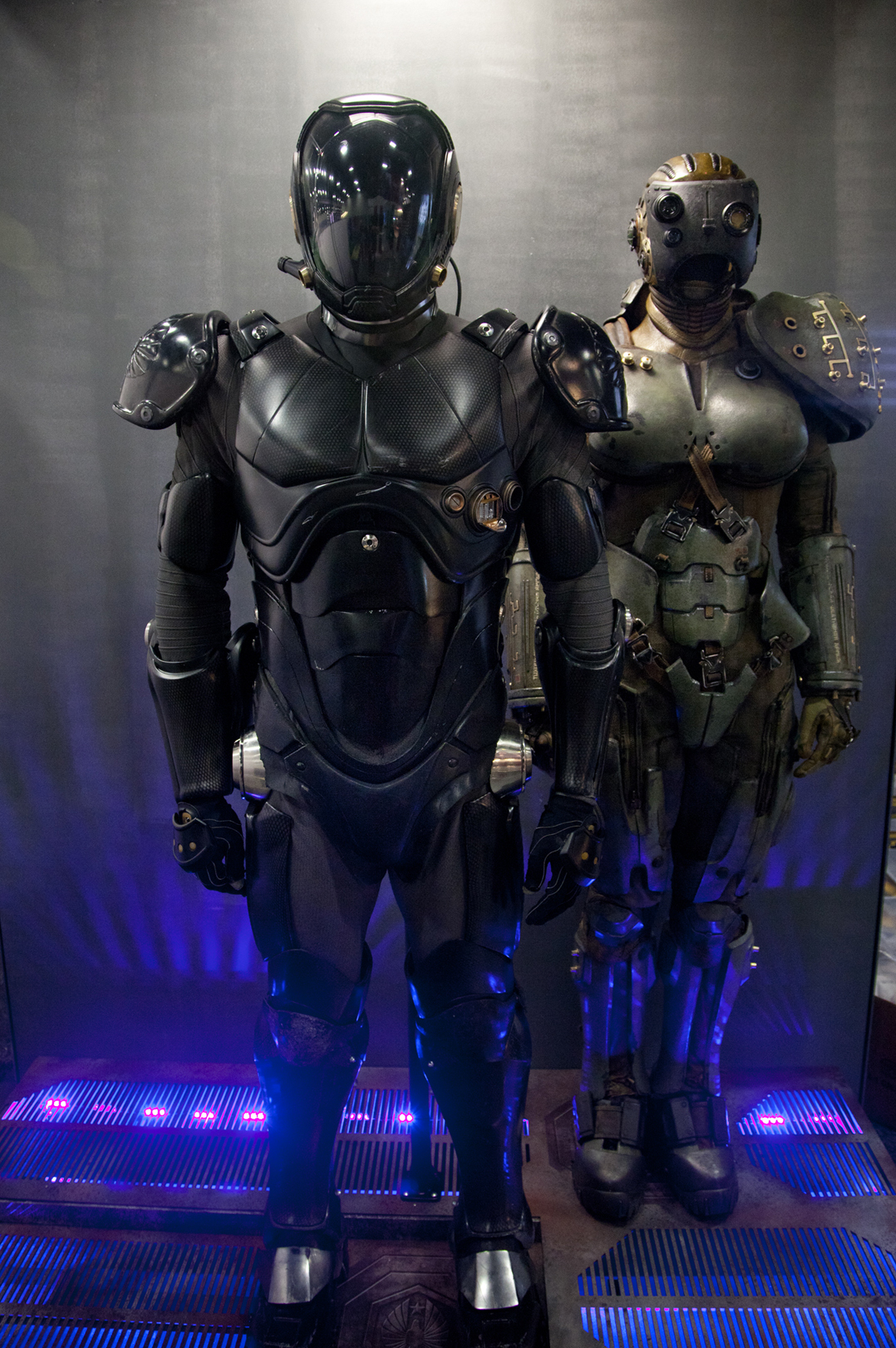 DS: How's it going with you?

DS: OK, let's get into it. Tell us a little bit about Pacific Rim.

GDT: It's a movie that I hope sort of evokes a sense of grand adventure. I'm trying to make it very exciting and emotional and at the same time trying to make it spectacular. Very often I find that spectacle comes with a scale that sometimes robs you of an emotional core. I like to preserve both, ya know?

DS: Since you guys are unveiling these costumes that the pilots in Pacific Rim wear at Comic-Con, is there anything you wanted to say about what people will be seeing?

GDT: Yeah, Shane Mahan and Kate Hawley who designed the costumes of the film along with a few other designers spent several months designing the costumes for each of the Jaegers (the people who pilot the robots). Of the two costumes, one is the Russian which is more retro and more cosmonaut and old-fashioned. The other one is the one for the American pilots made up of carbon fiber, super light. In both cases, costumes were designed to interface precisely with the Jaeger rig. The rig fits every part of the body, it becomes an extension of every part of their body. Both these costumes will be displayed at this year's Comic-Con at the Legendary Booth #3920.

DS: Are you going to be wearing one of these costumes when I meet you at Comic-Con? 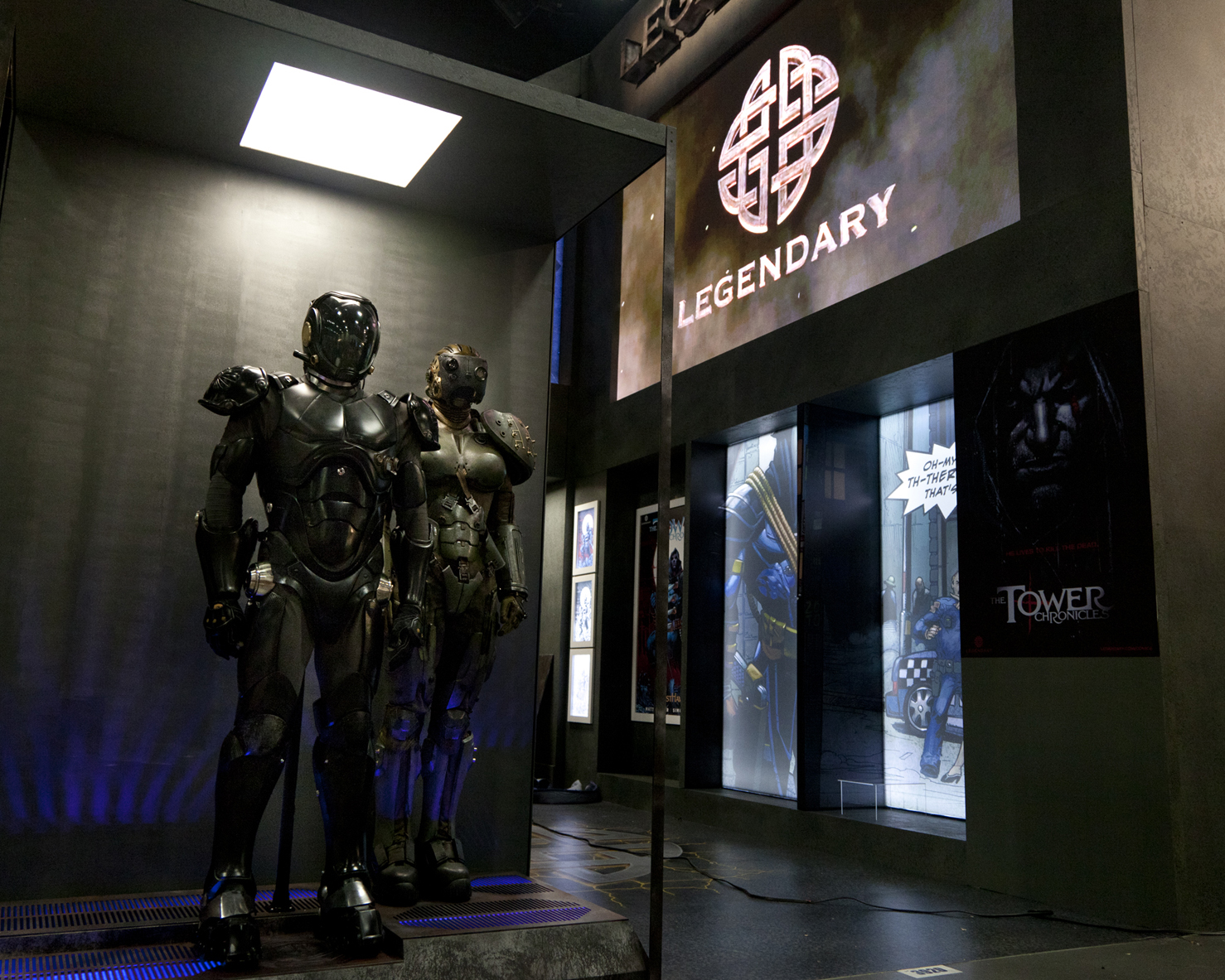 GDT: The only costume that will ever fit me would be a giant cherry.

DS: (Laughs) So How did you get involved with Pacific Rim? Was it originally your idea or was it something you came aboard on?

GDT: I came into Legendary to discuss the possibility of making a movie together. They had a very small pitch about what they thought Pacific Rim would be. I started developing Pacific Rim from the start. I developed the screenplay from the get-go so I've been involved with it for more than two years.

DS: So it's been awhile then?

DS: Obviously from everything I've heard about the movie it's inspired off of the old Toho (Godzilla) giant monster films, are there any non-obvious inspirations you put in while making the film?

GDT:Well I think that you know the strangest inspiration, the basic one was I wanted to bring sort of a central opera, to the size, the scale to the creatures and the robots. One of the first images that came to mind is an image that you wouldn't think would inspire a movie like this. It's a painting by Franciso Goya called "Colossus." It's a painting where you see this gigantic figure looming above a very small town. You know not referencing pop culture stuff, this was the first thing that came to mind when making Pacific Rim. Other then that everybody I hired to design, plan and animate are people who love giant monster movies and love robots, so we made it a point not to reference any particular work. We just tried to do our own interpretation of two genres that we love. 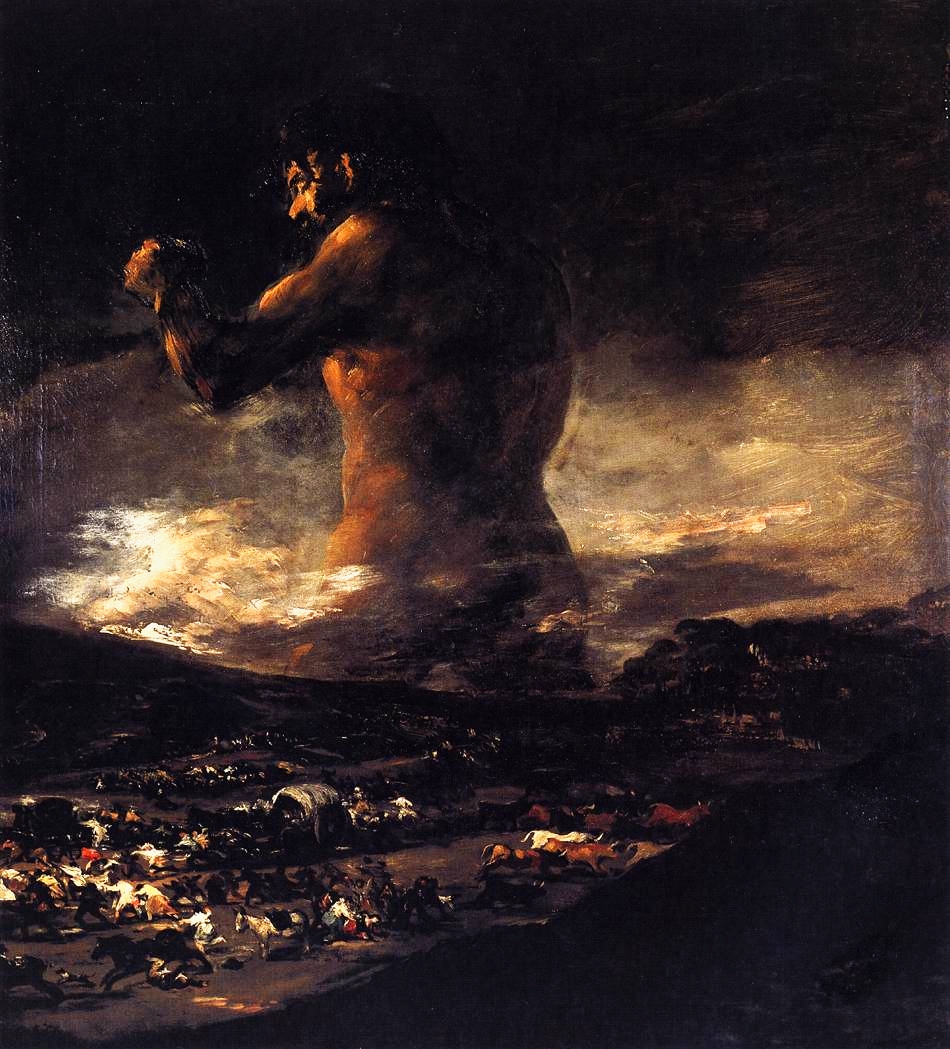 "The Collosus" by Franciso Goya circa 1808

DS: Yeah, wow. That actually goes into my next question. I know you worked a lot with Guy Davis on creature designs who has done a ton of comic work with BPRD and The Marquis. Who else helped with the creature design?

GDT:We have Wayne Barlowe, We have Oscar Chichoni who is a great artist. We have Francisco Ruiz Velasco who worked on Hellboy 2 and on the design of The Hobbit. We have a sculptor David Meng who is one of the greatest monster sculptors/designers I have met. We have a sculptor called Simon Lee, another fantastic monster sculptor. There's two or three more designers in the monster area who are not that well-known, but they are fantastic too.

DS: Was there always a specific vision of how the monsters were going to look or did you kind of let the guys go wild on the designs?

GDT: No, we all came up with different ideas. Every week, we would get together and look at the monsters and name them and put this one in Tokyo, put this one in Hong Kong -- we moved them around a lot. It got to a point where it was almost like a pageant.

GDT: We voted all together in the design room. We put all the monsters together and we did like a pageant. "How many of you like this monster?" Like American Idol! "Let's make this one this, let's make this one that..." The finalists we then literally spent months and months polishing and redesigning and recoloring. I mean, designing the monsters and the robots for a better part of a year.

DS: Yeah, I can only imagine. Just from that little peek of one of the robots from the teaser poster, it looks like a ton of time was put into them.

GDT: We designed them so that they would make sense -- mechanically and biologically -- and if you watch there were a couple designers that all they did was to design details and markings for the robots to make sense, like machines. You know when you see submarines or helicopters or a tank they are full of little markings. A little port, little connectors -- we tried to show things like where they would enter into the robots. If you see that poster again and zoom in really close, you'll see it's a working machine. We need them to make sense, mechanically.

DS: Yeah, there seems to be a practicality to it. Seems like a lot of thought was put into these like you were designing these in real life. Like it's something a company manufactured or something. Not a lot of filmmakers put that much effort into something like that, especially if it's something that will be shown just briefly on film.

GDT: When we release the Blu-Ray or art of Pacific Rim book, people are going to be really happy to see the level of thought that was put into designing everything. The robots were designed so they'd have a very beautiful profile, if you see between the joints you'll see a lot of mechanisms doing the hard work. Levers, pneumatic tubes, joints -- it's really fucking amazing.

DS: It's great to see that you have this really collaborative spirit. You're not one of those directors who takes all the credit. You seem to relish in mentioning all the guys that work behind the scenes and that's great. Sadly that's not something that's done as much as it should be.

GDT: I think that when you hire people as talented as we are fortunate enough to work with in this movie, we definitely celebrate what we are able to achieve together, ya know? Having everyone bring in their own sensibilities is fantastic.

DS: I think having collaboration work well is great. I'm a comic creator as well and seeing what an artist can do with something I wrote is crazy. Having them add things and make an idea work so much better than it could have by itself is amazing -- seeing how much better a final product could be once everyone has done their job.

GDT: Much better, I think. When I do directing, your first duty is to tap quote on quote "the best people for the job." It can be actors or technicians or the designers; that first is the most important step, but after that, in theory, you should have fun.

GDT: Oh absolutely. Just every week when we have two or three calls with ILM (Industrial Light and Magic) who do the effects shot by shot and frame by frame. When we're going through the review it's like a vacation. The same is true when we were examining and designing the armatures, the effects, the wardrobe, working with the actors, this has been the movie that I have enjoyed the most making.

DS: Wow. That's great. So what is it about monster movies that you think keeps getting people to see them after all these years?

GDT: I think that when we started telling tales as mankind, some of the earliest tales we started telling were about monsters. You know so I think that we all love the idea of something so big, so powerful. Like the embodiment of a force of nature... monsters on the scale that we are creating which are over 250 feet, they are over 25 stories high. You see those things fighting each other it evokes a sense of awe which is why the first thing I thought of was that Goya painting. Monster movies give you that. They give you a sense of wonder that makes you almost revert back to that feeling you had as a child.

(After that Guillermo had to cut the interview short as he was boarding a plane.)

DS: It was really nice talking to you, Guillermo.

GDT: Thank you very much. Are you coming to Comic-Con?

GDT: Are you coming to the Hall H Presentation?

DS: I'm gonna try to get in there, for sure.

GDT: OK, Let's talk after that.

The company will also have at its booth the mini-tumbler and IMAX camera that was used to film The Dark Knight Rises and will be promoting Pacific Rim and other films during its Hall H panel on Friday. Additionally, Legendary will be announcing its all-new lineup of comic book creators and revealing new details on projects from the likes of Matt Wagner and Simon Bisley for The Tower Chronicles as well Shane Davis, Max Brooks and Mark Waid for an all-new title called Shadow Walk.

Lastly, Legendary will be teaming with LG to offer fans an opportunity to win "The Pass" -- a behind-the-scenes invite to one of two special screenings that will showcase never-before-seen footage from a selection of upcoming movies that could include Pacific Rim, Seventh Son and others -- as hosted by esteemed talent associated with upcoming Legendary features.