But they're not. The evidence that selenium prevents prostate cancer is as skimpy as Paris Hilton's bikini. Worse: there's disturbing evidence that selenium may actually increase the risk of diabetes. Because of that, the Center for Science in the Public Interest (CSPI) has threatened to sue Bayer unless the company stops its deceptive marketing. CSPI is also calling on the Federal Trade Commission to require the company to run corrective advertising. 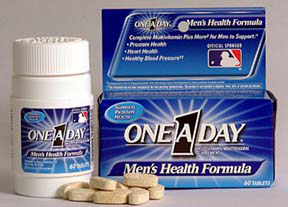 Bayer, of course, is not alone in exaggerating the benefits of dietary supplements and foods spiked with everything from ascorbic acid to the amino acid taurine to zinc. The supplement craze was sparked in 1970, when Nobel Laureate Linus Pauling contended that megadoses of vitamin C prevent the common cold. There never were more than shards of evidence that vitamin C could ward off colds, but Pauling's credibility paved the way for a burgeoning industry.

Since then, countless companies have marketed countless products on non-existent or paltry evidence, taking in the gullible... and even the somewhat skeptical. For many years, it was the pill pushers who proclaimed supplements' glories. But then small food companies began to put their toes in the "functional foods" waters. And major corporations, not wanting to miss out on a potentially profitable niche, have now dived in.

The U.S. Food and Drug Administration (FDA) used to object to the frivolous fortification of foods. It reasoned that haphazardly adding cheap nutrients could encourage the consumption of fortified junk foods and might even be harmful. But the vitamin industry lobbied Congress, and in 1976 Congress forced the FDA to make its "fortification policy" voluntary (though the agency still could take action against harmful levels of vitamins and minerals).

The agency also had the power to stop the marketing of dishonestly labeled or dangerous dietary supplements. However, in 1994 the dietary supplement industry got the law weakened again to further reduce the FDA's ability to protect consumers.

The proliferation of deceptively marketed foods and supplements harkens back to the patent medicine quacks of the 19th Century. Consider:

Fortification can be useful when it involves the right nutrients in the right foods. The vitamin D added to milk helps us get more of that bone-building nutrient. Adding calcium to orange juice helps people who don't drink milk or other major sources of that mineral.

Exceptions like those aside, health-food stores and supermarkets are bulging with foods and supplements that are fortified primarily to distract you with fancy claims while the manufacturers and stores pick your pocket. Trial lawyers and state attorneys general have brought a handful of cases against some of the most egregious cheaters. But what's needed is stronger laws and greater funding that would enable state and federal agencies to protect the public from unscrupulous marketers. That would be fortification we could all use.

Jacobson is executive director of the Center for Science in the Public Interest, the nonprofit publisher of Nutrition Action Healthletter.

Executive Director, Center for Science in the Public Interest