The Pacu, which has come to be known as the "testicle-eating fish," looks like a Piranha with dentures and has reportedly turned up in far-flung locations -- from Denmark and France to Illinois and northern New Jersey. Now, a reader has directed our attention to a Pacu that turned up in a suburban lake last month near Seattle, Wash.

Apparently hooked by a fisherman in Lake Ki in the town of Marysville, this latest Pacu measures a whopping 17 inches in length, according to the Washington Department of Fish and Wildlife. 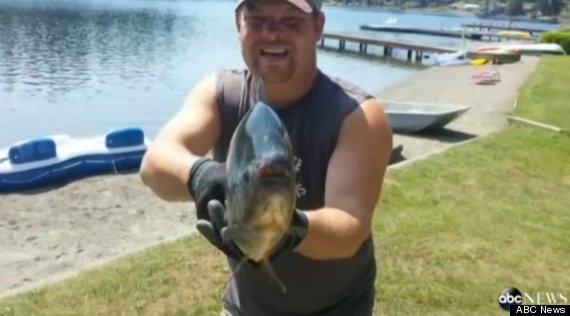 Actually, this fish was probably dumped into the lake after it outgrew its owner's tank, Jeff Holmes of the Washington Fish and Wildlife told The Huffington Post over the phone on Monday. Because Pacu grow very fast and can reach sizes of up to 4 feet long, exotic fish owners often get rid of them by releasing them into natural water bodies.

"There's been a trend on that happening in the past," Holmes said. "We've had other Pacu and Piranha dumped into lakes in that same area."

And it's not just the Seattle area. There are also news reports of Pacu caught in Arizona, Colorado, California, Arkansas, Texas, Alabama, Idaho, Indiana, Massachusetts, Maine, Mississippi, Virginia, Oklahoma, Utah, Wisconsin and Wyoming, among other locations. Most of these were apparently dumped by fish owners who no longer wanted to care for their pet Pacus.

The problem with that is, the fish can pose a danger for swimmers. Although Pacu are vegetarians -- they have molar-shaped teeth and strong jaws that let them crack open tree nuts -- they will also eat small fish or meat lures. They are even said to have bitten human testicles, reportedly causing two fishermen in New Guinea to die of blood loss.

Holmes said the dumping of exotic fish like the Pacu has been such a problem that the Washington Fish and Wildlife Department is having the Marysville Pacu mounted as an educational tool to teach residents about the dangers of invasive fish in the area.