While revelers dance in the streets in New Orleans, Detroit has its own way to indulge before Lent -- doughnuts.

But not just any doughnut. Thanks to the the city's Polish population, we've gladly adopted the tradition of eating rich, calorie-crammed pączki (say: "punch-key") on Fat Tuesday -- they were originally created to use up forbidden fat, sugar and fruit -- whether or not you observe the Catholic holiday.

I'm one of the non-observers, but as a celebrator of all things sugary and all things Detroit, I feel honor-bound to eat a doughnut in the name of tradition.

Going to college in a small town in western Massachusetts, it was a struggle to celebrate Pączki Day properly, when most people looked at me glassy-eyed when I described "a jelly doughnut, but WAY better, crispy and fried on the outside, soft and moist on the inside, filled with jam and covered in powdered sugar." They were content with the town's (admittedly delicious) autumnal cider doughnuts.

My first February living outside Michigan, I settled for a lackluster grocery store pączek -- definitely not worth the calories.

Sophomore year I decided to live without. Or really, recently dumped and wallowing, I had stopped caring about food -- even pastries -- altogether. Believe me, it's the first and last time that's ever happened.

Don't worry, this story of doughnuts and teenage heartbreak has a hero, a friend who saw my pączki plight and decided to cheer me up, despite the city's dire shortage, by making some of his own. He dug up a recipe, borrowed a car and commandeered the deep-fryer at the campus cafe where he worked, nearly getting himself fired in the process, to surprise me with a homemade pączek.

It might have tasted a little different than I remembered, but it was still the best I had ever eaten.

An amateur baker myself, I've often wondered how difficult it really was to make pączki. When I decided to give it a shot this year, over and over again people wished me luck. Look, I thought, I don't need "luck." I make my own pie crust. I get fudge right every time. I've never met a baked good I didn't like, or couldn't make. Doughnuts should be a piece of cake (sorry).

Preparing to make pączki had me scouring the depths of the Internet (I will be revisiting Deep-Fried Food), comparing recipes, debating if using a recipe from Poland was worth converting from metric measurements, asking why some recipes called for double the amount of eggs and generally wondering why a little doughnut with such a simple list of ingredients could have so many variations.

Overwhelmed, I sought some professional advice. Rodney Srodek of Hamtramck's Srodek's Campau Quality Sausage, a Polish market, said the secret was to add alcohol to the dough, so the dough doesn't absorb as much oil -- I can't vouch for the science behind that, but I certainly love the concept. If I couldn't find a certain type of Polish grain alcohol, he said, Everclear or Bacardi 151 would do. And definitely fry the doughnuts in lard.

Nate Liska, a Hamtramck-born chef at Ocean Prime in Troy who teaches cooking classes at Sur La Table said, in so many words, that his buddy Rodney was full of it. Canola oil would work fine, the trick was not to make the oil too hot. And to not overmix the dough.

But, he added, baking isn't really his thing.

In the end, I settled on a Serious Eats recipe that seemed to combine the best of the others, besides the grain alcohol -- most of the English versions didn't call for that. I bought my ingredients in the morning, including a visit to Srodeks for traditional plum jam and my preferred raspberry, as well as a 9 a.m. stop at the liquor store. I also made sure to go to New Palace bakery (the store lists calls itself the Official Pączki Headquarters and lists its Tuesday hours as 3 a.m. to ???) and buy one pączek -- for comparison, I told myself, but really so I would have one just in case I failed. This time, when I got a "good luck" on my baking mission I was much more convinced I would need it.

It turns out I could have used even a little more luck, or a little less confidence, as I learned after I botched my first round of dough. But by the end of the day I had several containers full of pączki that earned my bread-baking Catholic roommate's stamp of approval as worthy of a Fat Tuesday splurge. While anyone who lives near a Polish bakery should be able to get a doughnut for less money and a lot less time, there's nothing more satisfying than eating a fresh, homemade pączek. If you're wondering how to make your own (and how to avoid my mistakes), follow along below. 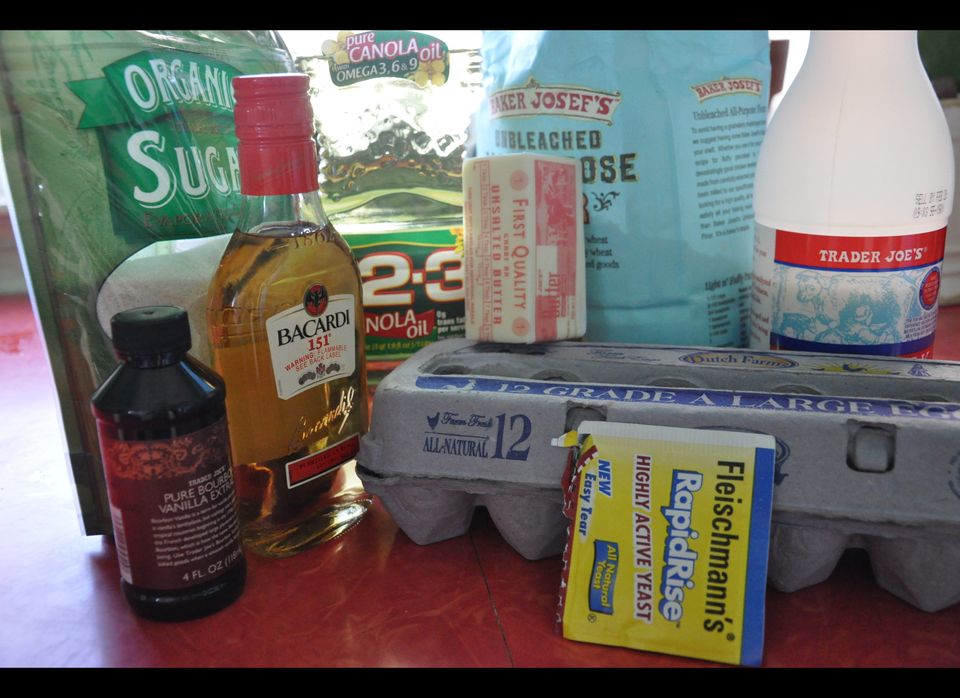 1 / 15
Ingredients
<a href="http://www.seriouseats.com/recipes/2012/02/paczki-jelly-doughnuts-recipe.html" target="_hplink">Paczki recipe adapted from Serious Eats</a>. My version is halved after seeing the enormous lump of dough from my first try. The original claims to make 18, my halved recipe made 20 more modestly sized paczki. 1 cup whole milk 2 ¼ teaspoons instant yeast (1 standard sized envelope) 1/4 cup plus 1/2 tablespoon sugar 2 1/2 cups all-purpose flour 2 eggs yolks plus half egg (this is the only weird measurement from halving the recipe -- I eyeballed it) ½ teaspoon salt 1/2 teaspoon vanilla extract 1 teaspoon Bacardi 151 or other high alcohol liquor 1/8 cup unsalted butter (1/4 of a stick), melted and cooled 1 quart canola oil 1 jar of preserves (I used raspberry) 1 cup powdered sugar for dusting You will need a baking tray, a saucepan, at least two bowls, spatula or tongs and a whisk. Optional equipment: mixer, round doughnut or cookie cutter, parchment paper, thermometer, pastry bag and filling tip -- I used the pastry bag and tip but none of the other equipment, though it might make your life easier.
HuffPost