This Is Pagan Island 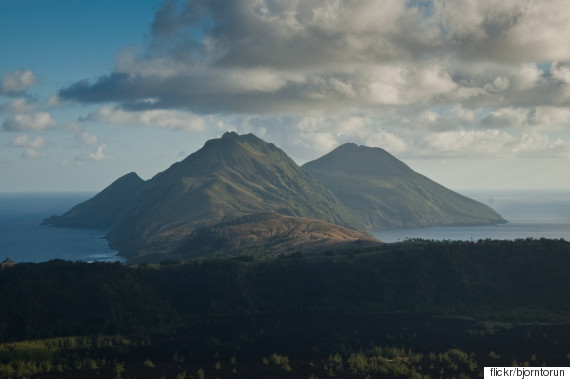 Pagan island is a biologically diverse, 10-mile-long island anchored by two volcanoes in the Commonwealth of the Northern Mariana Islands, an independent government associated with the United States.

The island, nearly three-quarters of the way to the Philippines from Hawaii, is home to wildlife that includes an endangered fruit bat, endemic birds, huge spiders, lizards, and a rare tree snail. The island has been mostly uninhabited since 1981, when its population was evacuated because of volcanic eruptions.

It is one of the most habitable islands in the Mariana chain, says Michael Hadfield, a biologist at the University of Hawaii at Manoa, who spent time on the island documenting the wildlife on behalf of U.S. Fish and Wildlife Service.

Hadfield, a self-described conservational biologist who also administers the website SavePaganIsland.org, wrote in an op-ed that Pagan Island is a “biological treasure house."

It may also be the next U.S. bombing target.

The Pentagon Wants To Use Pagan Island For Target Practice 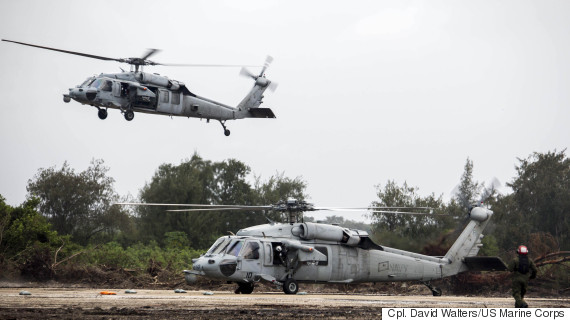 Pentagon officials have proposed leasing Pagan Island from Commonwealth of the Northern Mariana Islands to use for live-fire amphibious practice, including "guns-blazing war games on Pagan at least 16 weeks a year," the Los Angeles Times reports.

Hundreds of Marines would play out Pacific warfare attacks on Pagan's black sand beaches and in its fields, potentially participating with forces from other Pacific Rim nations such as Japan, South Korea and Australia, firing guns and mortars and dropping bombs from B-52s with support from drones, helicopters and fighter jets.

The exercises would be part of President Barack Obama's military "rebalance" to the Pacific. The Pentagon website says the island could be used for increased "joint military training capabilities by developing live-fire ranges and training areas."

Because China is investing in amphibious invasion capabilities, the Pentagon says the U.S. should be prepared, should war return to the Pacific.

Pagan is the only island in the area with beaches big enough to support large amphibious maneuvers, Marine Corps officials said.

Craig Whelden, executive director of Marine Corps forces in the Pacific, told the Los Angeles Times that it's the "perfect" training opportunity. He acknowledged Pagan's natural beauty and endangered species. "We would protect it like it was our own," he said.

Residents of Commonwealth of the Northern Mariana Islands, as well as the Sierra Club and other environmental groups, strongly oppose the U.S. military’s plans.

The CNMI legislature called on Gov. Eloy Inos to deny the military's proposal, even though it would bring hundreds of millions of dollars in construction contracts to a floundering economy.

Inos will ultimately approve or deny the U.S. lease request. The Los Angeles Times reports that local lawmakers are worried that Congress can take the land by eminent domain under a 1975 compact between the U.S. and the Mariana Islands.

Jerome Aldan, mayor of the Northern Islands in the commonwealth, said military operations would essentially turn Pagan "into a wasteland."

A petition on Change.org asking the military to stop its plans received more than 6,500 signatures.

Pagan Is Uninhabited ... For Now 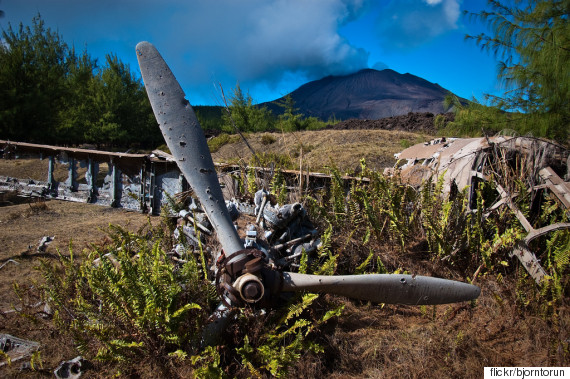 Remnants of Japan's military presence during WWII are peppered around Pagan Island.

Pagan is an ancestral home to the Chamorro people, who are believed to have settled there in the 1300s.

The island was evacuated in 1981, when Mt. Pagan, one of the largest and most active volcanoes in the Mariana Islands, erupted, forcing the entire population -- about 300 people -- to move to nearby Saipan.

"More than 50 families in Saipan consider Pagan their home island and have plans and desires to return to homesteads," he says. The island is occupied by about a dozen people, who he says live in shacks without plumbing, electricity or access to markets.

Cinta Kaipat, a lawyer and activist, told The Huffington Post that live-fire trainings and bombings will "kill the dreams of hundreds of families who long to resettle on Pagan and the other inhabited Northern Mariana Islands." Kaipat is Carolinian, the commonwealth's other indigenous group.

The Military's Final Proposal Could Address These Concerns 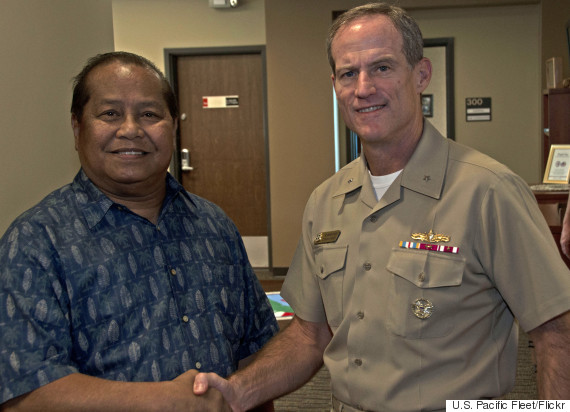 After holding several public hearings on its draft environmental impact statement, military officials announced they will look at ways to address concerns. The final impact statement will be released in July 2016.

According to the Saipan Tribune, possible compromises could include reducing the target areas for live-fire exercises on Pagan, as well as only dropping bombs on areas with more lava, to reduce the impact on wildlife.

Will It Be Enough? 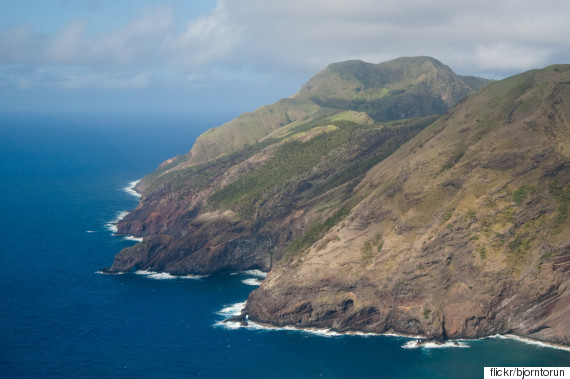 According to Hadfield's op-ed, “The proposed military activities will most certainly jeopardize Pagan and cause disturbances to its rich agriculturally and ecologically valuable topsoil, an increased risk of fire during dry summers, erosion and consequent destruction of Pagan’s coral reefs, and would risk extinction of Pagan’s unique plants and animals."

"The Marines would have you believe it’s a volcanic wasteland and it’s just not," Hadfield told The Huffington Post. "It’s a very special place in the world."

Hadfield said that he’s never been anywhere else where all the birds are native species. “There are no invasive birds; they all belong there," he said.

Whether the commonwealth governor will approve or deny the plan, or the U.S. will invoke eminent domain and proceed, bombing isn't likely to hit Pagan soil until at least 2017. Until then, the residents continue to protest and wait.

"There are so few places in the world today that are untouched. We shouldn't bomb those that remain," Angelo Villagomez, a former resident of Saipan who works for an environmental nonprofit in Washington, told HuffPost. "If the U.S. has to drop something on Pagan, it should be conservation dollars and scientific funding." 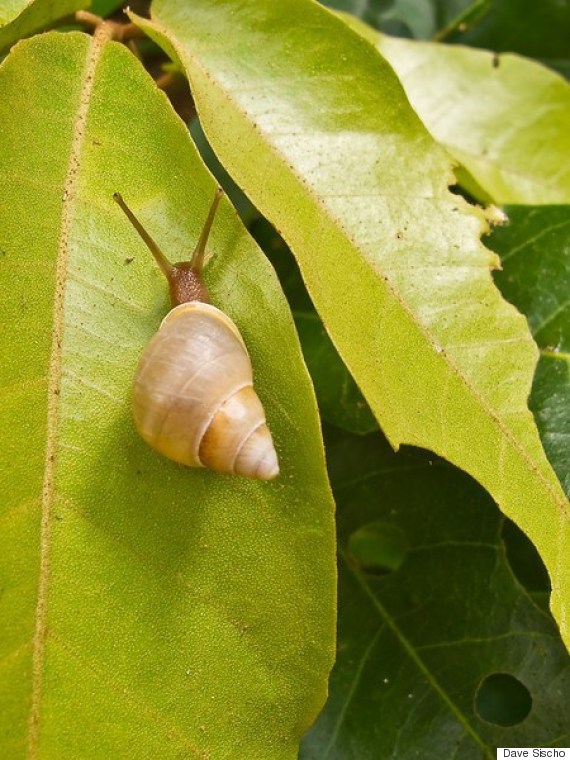 An endangered Guam tree snail, an animal that Hadfield spent 11 days on Pagan searching for, courtesy of Dave Sischo of Save Pagan Island.