The lava flow currently creeping across Hawaii Island’s Puna region is luring residents to the flow front like moths to a flame.

But while some onlookers sat in lawn chairs outside police-enforced barricades, patiently waiting to see the flow cross the street, Puna resident Ruth Crawford drove to a lobe of the flow to see it firsthand. She and friends allegedly trespassed on county property and dunked a bunch of household objects -- like golf clubs, forks, coins and an egg beater -- into the lava for fun. 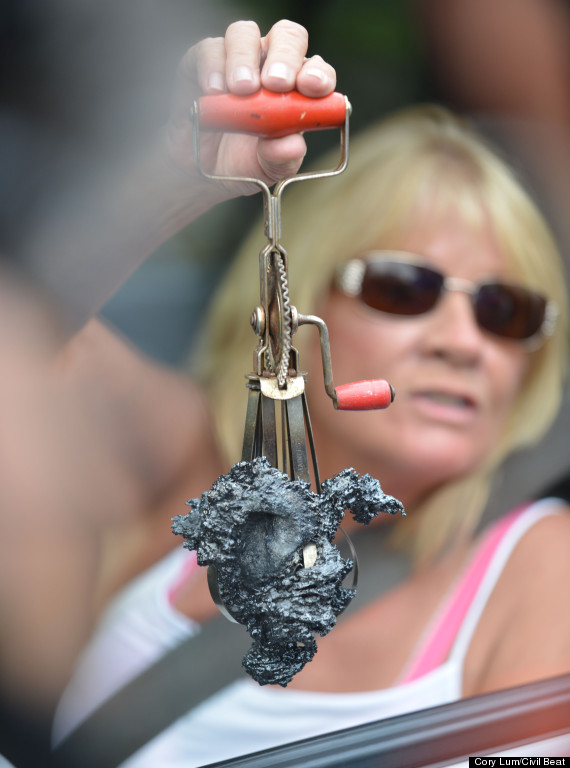 After telling the media about the adventure, Crawford and her friend Stephan Paul Koch were arrested and charged with second-degree criminal trespassing. They were released on $250 bail.

Crawford, who is 59 years old, told HuffPost that she’s embarrassed now and acknowledged that, “We shouldn’t have done it and feel awkward because we got arrested. … It’s really rich to be my age and have my mugshot on the Internet.”

The lava might be slow-moving, but officials warn it's still plenty dangerous. Unpredictable methane gas explosions can shake the ground and throw debris into the air. If a lava onlooker lost his or her balance, officials warn, he or she could fall into the 2,000-degree lava.

Crawford, it seems, wasn't thinking about those dangers. She told reporters that she went, “Just because it's lava and I've been here 23 years and I was kind of excited and scared and just wanted to do it."

We can all learn a lesson from Ruth. If the cops catch you throwing a hand mixer into the Puna lava flow right now, they'll tell you to beat it.