Suddenly you are ripped into the experience of being alive.
Life is pain; life is suffering; life is horror, but by God you are alive and it is spectacular! Joseph Campbell 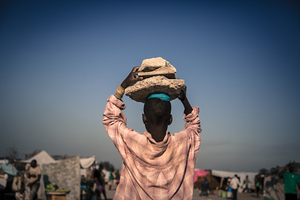 Suddenly I am alive, and I am in Haiti. I am on a search for toys, because toys are linked to play, and play is linked to being human, or so I think, so I'm taking my camera to Haiti to explore this idea. I find myself in the evening light at La Piste, an old airfield, very near Surpiste, "the runway", which I had known from the 2010 post-earthquake days as the site of one of the largest displacement camps. I have a photo of a boy from that time scurrying off with prized slabs of concrete on his head. I photographed banks of cell phones, as orderly as fish at the market, drinking precious electricity and lining the pocket of someone very clever. In this instant, tragic community, barbershops and food stores had opened within hours, and the arrival of NGOs to fill the giant bladders of fresh water was avidly monitored. What I remember most is poverty, extreme poverty, and a quiet mist of fear that subsumed all of us in Haiti in early 2010; fear that random powers -- disease, violence, geology, politics -- could reach out again, anytime. Even now the damp pervasiveness of that fear is tangible to me as I look at those photos. 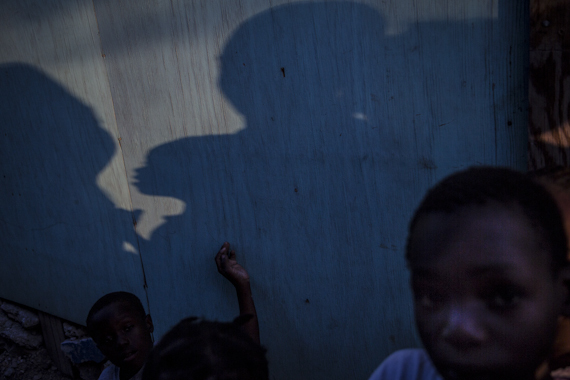 I have one 2010 photo of a kid in Surpiste with a home-made kite -- a plastic bag, some sticks, and bound lengths of string forming knots up the line. He was running through the debris of a fallen city in those ubiquitous plastic sandals; it was the first time I had seen kids in the camp at play. I stayed with him for a while and photographed, happy to be visually eavesdropping on his resilience and his joy. 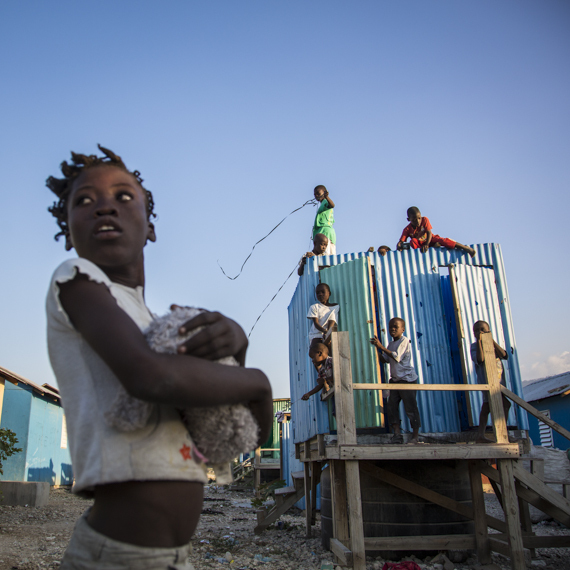 In 2014 I am still photographing play, and joy, and resilience, which has brought me back to Haiti. I take it as a sign of progress and healing that Surpiste was closed in 2012. It's sister "temporary" camp across the road, La Piste, is still active however, and as we approach it confusingly appears bright and orderly, with an unusual rainbow palette of carefully placed houses. Strangely I notice a kid pushing an extra-wide wheel chair such as we use for obese Americans, which seems a particular irony here in the slums. Then there are lots of wheelchairs, and they are being used to cart both people and cans, in search, I realize, of water. There is a woman missing a leg; a group of men engaged in the chaotic language of the deaf, and I finally appreciate that this is a camp for the handicapped. It was established by an NGO as a safe and supportive temporary camp to protect the most vulnerable from the chaos of the larger displacement camps. The La Piste I'm visiting now is still home to 400 families.

Haiti is filled with sunshine and brightly colored houses, which speaks of happiness for shelter and community, and all kinds of sadness. The fundamentals have given way at La Piste; the water tanks that were initially provided were too valuable to survive undefended and were stolen long ago; same with the solar panels, added for safety and, well, just because its nice to have electricity at night, most likely flowed their way through the downtown black market and onto suburban roofs. There is no electricity; there is no running water. The latrines, cheerfully painted and handicapped accessible are full and have never been cleaned. Ugh. 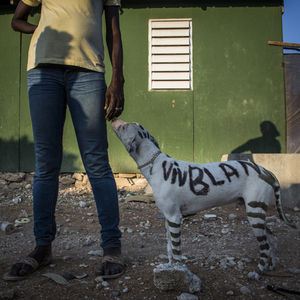 The children wear torn t-shirts and run barefoot amidst glass and rocks, but seem excited that "Blanca"is there with a camera, so I wander off and begin to ask about toys, though am quickly told by the adults that there are none. Then I see a girl playing with a pipe on a string, swinging it to a quiet little melody, dragging this "toy" along in the dirt. And I see a 5 year old, careful as a lab scientist, filling up bottle tops with mud for a tea party; her little plastic spoon is broken, which seems especially cruel. Weirdly, the dogs have their names written in paint on their bodies, stripes painted down their legs, yet they don't seem to be playmates for the children at all. 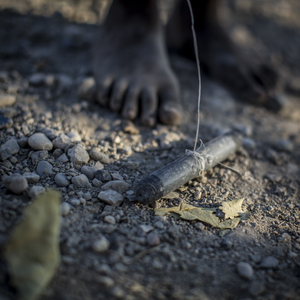 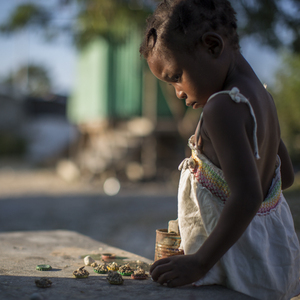 Slowly toys emerge. A boy ducks his smile and quietly unfurls a hand to reveal a 2" superhero figure. A girl softly offers to show me a stuffed animal, a lamb. There is a plastic boat, and a handcrafted pull toy made out of a water bottle and soda tops, filled with rocks as ballast. I squat down to photograph it, and suspiciously note a wave of giggles alerting me to the fact that I am kneeling inches away from a big, dead rat.

Later, two amazing things occur: a boy tells me he has a "train" in his home, so we go to meet his mother. Together they show me a still-in-the-box tractor-trailer toy, a double-decker, multi-car toy that any kid, anywhere, would be proud to own. His brother had received it 2 years ago at a Christmas toy giveaway, and it has been proudly on display in a protected spot, high in the rafters, never opened. I am horrified that he felt compelled to open it for my camera, though his friends are awestruck and thrilled to witness the unveiling of this prized object. I shoot quickly, and we carefully repackaged the truck in its Styrofoam packaging and safely return it to the rafters. This vivid reminder of the deep contrasts in our lives once again humbles me. 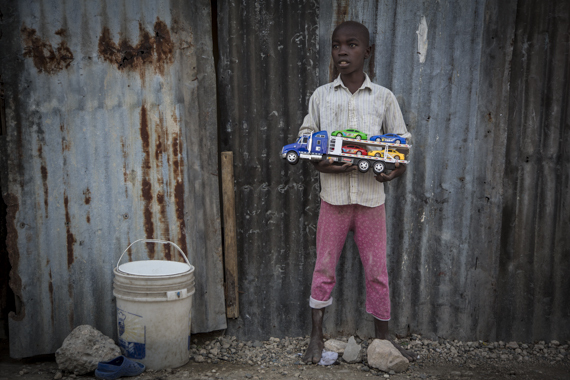 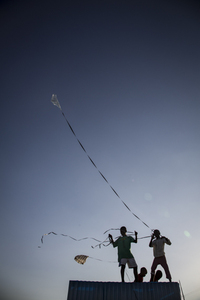 Next, at the tail end of the light, the breeze kicks up and the kites emerge. They are wind-filled plastic bags tied at the handles and attached to a piece of dental floss, or a run of old cassette tape, or even an old line from a USAID tent, and it is beautifully joyful. The more sophisticated kids actually have a spider-web-like frame made of sticks to hold the plastic in place; everything is valuable. For additional wind, the kids climbed to the tops of those horrible latrines, which are suddenly part of their play, choosing the highest walls for maximum flying effect, and the thrill of being above their world.

I worry for their safety, but I continue shooting. It is beautiful. I shot them silhouetted against the sunset, their kites bouncing joyfully in the air; like kids with toys anywhere in the world.