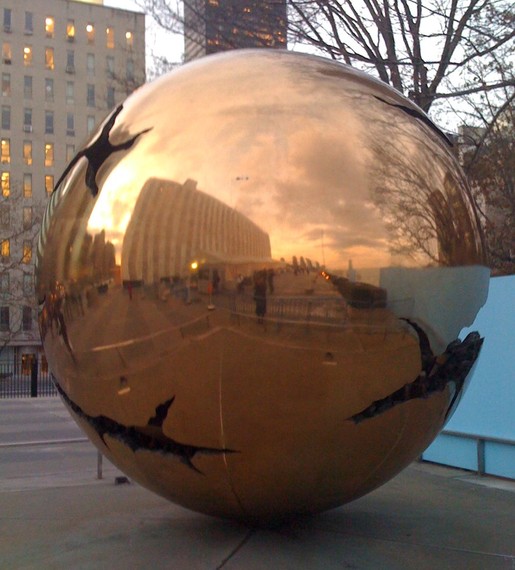 It was 5:30 a.m. when we checked our Uber app to see if there was any driver awake on a Friday morning in Gothenburg, Sweden. There were several, and five minutes later we were packing our suitcases into the trunk of a big black car. The young man offered us some bottled water and asked us if we wanted more heating, less music. "How long have you been an Uber driver?" I asked. "Not too long," he replied, "but I'm only doing it until the summer. I have a job starting in the summer, with the city."

"What will you do there?" I asked. "I will drive mentally-disturbed people to do their errands. This is a service the city offers to people with mental disorders of any age who don't have relatives to care for them, or who cannot do the errands with them. I am a driver, but I am also expected to bring them some joy, to motivate them, to make them a bit more happy," he added, with visible excitement. "Have you been trained for this job?" "No, I haven't, but it's not that difficult to make people happy, is it? I also can observe if they have other needs and inform the city, to help them with other things. But only if they want to, of course."

I am aware that Swedes, like many Europeans, pay high taxes, but I couldn't help feeling the desire to move to that country. Comments made about "the nanny state" in a dismissive way in Singapore ("We are not a nanny state!"), or in the U.S. ("We are not socialist!") came to my mind. In a land of self-made men, where is the place for a caring attitude? I compared in my mind the historical context of a nation built by overpowering the indigenous peoples, by the conquest of land and people, and wondered what historical context had made Scandinavians, in this case, so caring for each other. Certainly not the Vikings.

In a recent visit to Finland, a person shared with me that there were few inhabitants per square kilometer, and that the harsh climate led them to cooperate and help each other. Could that be what ultimately overcame the Viking nature? Possibly, since we have seen that when catastrophes hurt people somewhere on our planet -- tsunamis, earthquakes, hurricanes, terrorist attacks, landslides -- these unexpected collective traumatic events tend to foster our feelings of solidarity and compassion, and we become kinder, less individualistic; we break out of our daily bubbles -- and reach out. And this behavior is beneficial not only for the receivers, but it also automatically generates a sense of well-being and satisfaction to the giver.

Author Riane Eisler has studied models of domination and partnership in cultures around the world, and notes that when we are living in the domination model, there is always someone overpowering others -- white over black, black over Latinos, one caste over another, men over women, one religion over another, one gang over the other. In the domination model it's all about who overpowers whom. Not surprisingly, in such a model, caring activities are secondary thoughts. Raising children, teaching, caring for the elderly, or the handicapped, seem not to be valued; they are not viewed as major contributors to the GDP. We may insist that our children are the most important for us, yet we would not accept paying a nanny the $50 hourly rate we are willing to pay a plumber, Eisler notes. By contrast, civilizations or communities operating under a partnership model have different values.

Helena Norberg-Hodge, who spent decades living in a community of Ladakh, in Northern India, experienced firsthand how caring was an important anchor of their society. When tourists began to frequent the region, the local inhabitants began to wonder if they were not missing something, when they saw the possessions the tourists displayed. She took a group of Ladakhers to New York, and these women were mesmerized by the lights, rhythm and activities of the city. But couldn't understand why there were people sleeping on the streets, or elderly were placed in retirement homes. Where are their families? they asked. The experience was enough for them to get back home and share with their neighbors and friends the other side of a reality, and the value of what they took for granted.

With all the crises banging on our doors, maybe that will push us find back the path to our hearts, and to each other.

Sweden Mental Health Socialism Tsunami Wellbeing
This Blogger's Books and Other Items from...

Exploring my soul
by isabel rimanoczy

Big Bang Being: Developing the Sustainabilty Mindset
by Isabel Rimanoczy