When I first moved to New Jersey's quaint suburbs eight years ago, one persistent phenomena seemed shockingly out of place. Amidst the pleasing bagel chateaus, the charming gift shoppes, and the friendly ice cream parlors, one thing was very much not like the others: Graffiti.

On signs, on buildings, on train station property, my town's local graffiti has the resiliency (and some would say, artistry) of a stubborn rash. And like a rash, no one seems to talk about it. 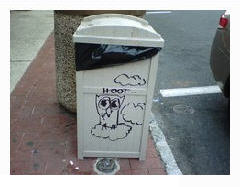 As I was crossing the street to my train station in Montclair, New Jersey recently, I caught with my cell phone camera that rarest of exotic birds: the suburban graffiti owl. (In Latin, graffitus ornithologus ridiculus). It was drawn on the side of a garbage can, though he makes unscheduled appearances all over the area. He's been there for months -- does anyone give a hoot?

Some graffiti acronyms, also called tags, are gang-related. These exist primarily to identify alleged gang territory, as if to say, "Hey, this is MY side of the Hallmark store." Other tags are merely gang-style, gang-like, or just have a faint aroma of gang. Only keen observers can tell the difference. For example:

I have suggestions for the suburban artists who absolutely must spray it and not say it. First: can you guys put a little space between your letters? They're so hard to read like that. Second, your work could use a splash of color. Look up "monochromatic" in the dictionary (that's the thick, dusty book propping up your Xbox). That's what your work is like.

Perhaps I'm too hard on my community's graffiti vandals. Maybe they're just artists, yearning for self-expression. Even my own artistic kids showed outlaw tendencies from time to time (unwashable crayon on formerly clean wall). Who am I to censor their artistic spirits? Oh right, their Dad.

My girlfriend, an artist in her own right, has more sympathy for the graffiti artisans than I do, but I maintain there's a time and place for everything. Color me intolerant, but if I'm not leaving my used newspaper on some teenager's futon, then he shouldn't be tagging up the walls of my train station.

Words to their mothers!