Street artists in Berlin are responding to neo-Nazi hate symbols graffitied around the city in the best way: by turning them into playful art.

Local graffiti artist and shop owner Ibo Omari has been transforming swastikas found on city streets with his Paintback project, spray-painting them into animals, flowers and other fun images, reports Reuters. With the help of fellow street artists, 37-year-old Omari, who grew up in Germany, has altered more than two dozen swastikas since the project began in 2015.

“We wanted to answer with love and happiness,” Omari told The Verge. “We take their ugly message and make something beautiful out of it.”

To paint over the Nazi-associated symbols, Omari has enlisted the help of the young members of his nonprofit group Die Kulturellen Erben, or The Cultural Heirs, which engages German and immigrant teens in activities like street art, hip-hop and break dancing, AFP reports.

The kids practice turning swastikas’ straight lines into fun images, such as people kissing, a Rubix cube, or an owl. Then, after getting permission from relevant property owners, they also go about transforming the hateful symbols they see around the city.

“I like it because I think swastikas don’t belong in Berlin,” Klemens Reichelt, a 17-year-old club member, told the outlet. “It’s a city open to the world and I want to defend that.”

Germany has seen a rise in far-right political violence in recent years, in a backlash against the government admitting more than 1 million refugees since 2015.

For Omari, the rise in anti-immigrant hate is personal: His parents fled Lebanon during the civil war almost four decades ago and arrived to Germany as refugees.

“People still feel scared by foreigners — like, people they don’t know, their first reaction is fear,” Omari told The Verge. “And this is unacceptable for us.”

Paintback first started after a man walked into Omari’s store two years ago, asking for spray paint to cover up a swastika in a playground, reports City Lab.

Omari responded by going to the park himself and turning the symbol into a large mosquito. After that, friends and neighbors started alerting Omari to more swastikas, and the Paintback project emerged.

Other unaffiliated artists around Germany have since joined the movement to transform swastikas into street art, the youth club’s co-founder Victoria Tschirch told City Lab, adding she’s “very happy” about it.

Omari himself credits 70-year-old former schoolteacher Irmela Schramm for being the pioneer in covering up swastikas in Berlin. She has garnered international media attention for her decades-long effort to scrape off neo-Nazi stickers and paint over symbols of hate she hunts for around the city.

As an alarming number of reports of swastikas have popped up in the United States since the election of President Donald Trump, people here have been sharing some creative responses to the symbol: After an increase in hate crimes post-election, a 2013 image that showed a swastika transformed into the Windows ’95 symbol went viral. And after a swastika appeared in a New York City subway in February, Gov. Andrew Cuomo shared a picture of it turned into a square marked with “L-O-V-E.”

“This is what New Yorkers do, we turn hate into love,” Cuomo said in statement at the time. “That is our message to the nation and to the world. And we won’t back down. Not now, not ever.” 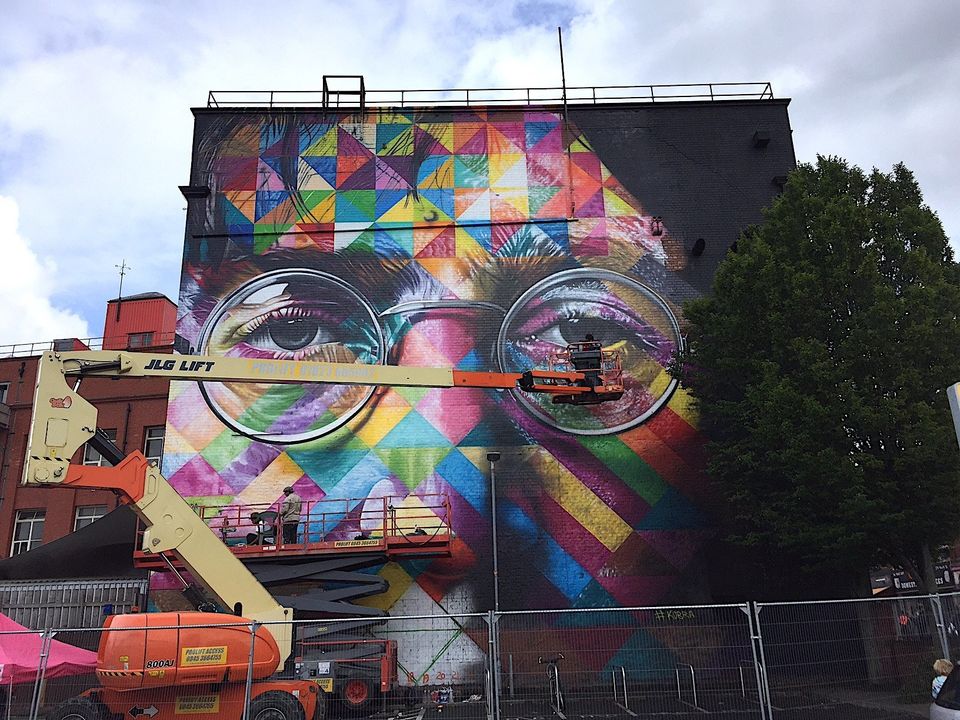