"One of the last things I ever saw before completely losing my sight was the planet Saturn," John Bramblitt recalls wistfully. "I’d seen photos of it before, but seeing it in real life through a lens ..." He trails off at the memory, unable to complete the sentence, still amazed at the thought after 14 years.

Bramblitt, 42, leaves others as breathless as Saturn once left him, working full-time as a painter and consistently producing a trademark blend of vibrant colors, swirling brushstrokes and meaningful emotionality that stuns viewers, especially those previously unaware of his visual impairment. 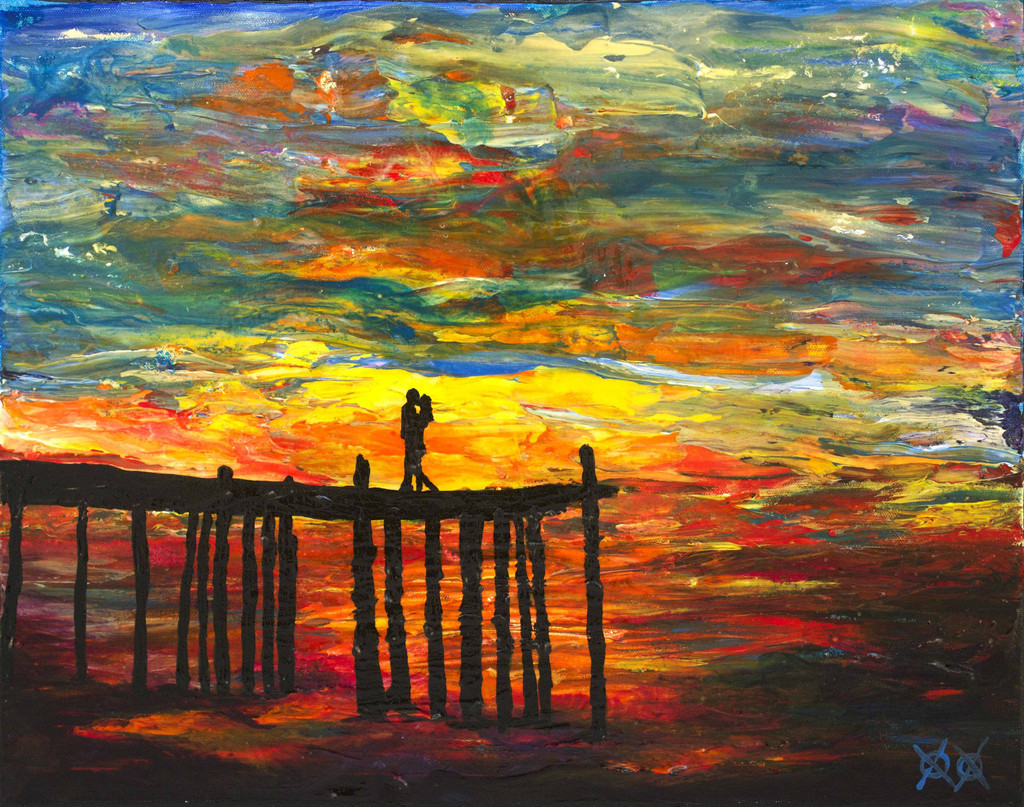 Through a series of raised lines on the canvas, he can determine his spatial position at any moment. Through sense of touch he is able to determine the correct paint color, noting that "because oil paints are made from different substances they have a viscosity and texture that varies slightly from color to color." Through a vivid imagination, he is able to create works that transcend his own physical limitations and enter another realm, one in which the mind and not sight rules supreme.

On the day Bramblitt spoke to The Huffington Post, he was working on a painting of a giant floating eyeball, representing how much he used to believe vision was the key to a fulfilling life. "The idea of color means more to me now than it did when I was sighted. Now it has more emotion," says Bramblitt, who lives in Denton, Texas, outside of Dallas. "It's more than just light being reflected off something."

He uses and mixes colors purely by touch alone. "With oils, creating different textures is easy because they are actually made from different substances, so many of the colors already feel slightly different. Burnt sienna, in the brand that I use, has a slight jelly like consistency, and melts when combined with a little paint thinner. Cerulean blue has a smooth creamy feel right out of the tube," Bramblitt said. "You can enhance these subtle differences by adding mediums to thicken or thin the paint even more." 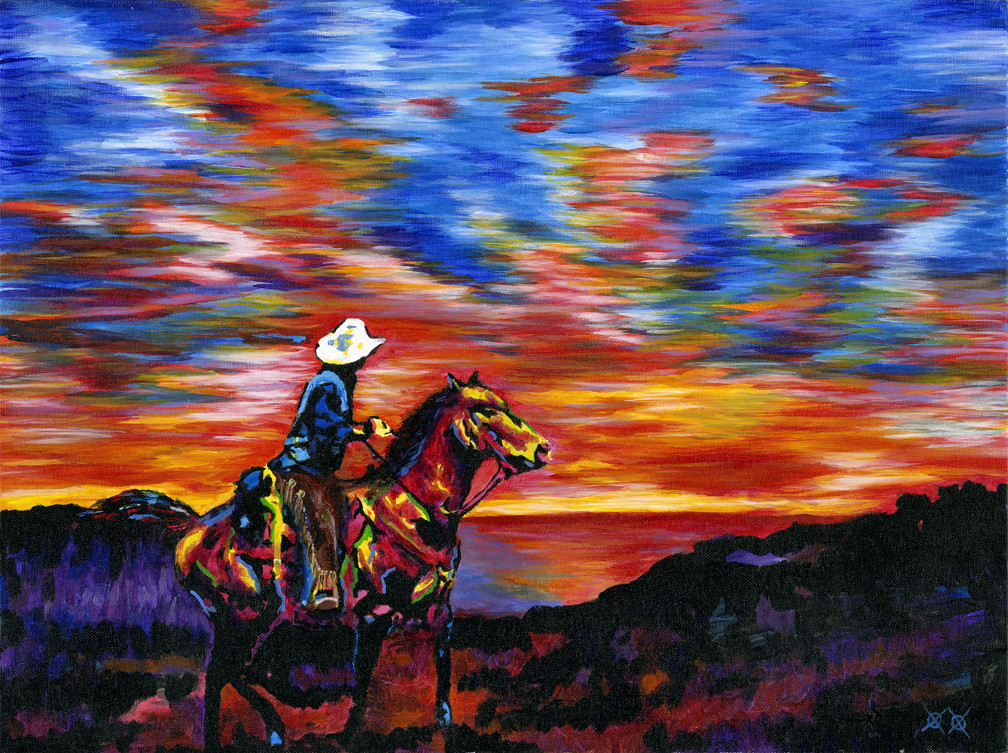 Bramblitt began losing his sight as a teenager, a process that lasted several years culminating in his mid-to-late-20s. Doctors say it was likely a long-term consequence of the epilepsy he had since age two and the Lyme disease he contracted as a teenager, in particular because the doctors did not catch the Lyme disease for a full three years. He had always enjoyed art but it was not his career choice. He earned a degree in creative writing and disability studies from University of North Texas, then spent the first few years of his professional life as an office manager.

At that point, he explained, he was going through a dark place and had ceased making art completely. Things changed when he started mobility training, learning to use a white cane. "I thought, ‘If I can get myself across the street, I can get myself across the canvas.’ It changed my entire perspective on life," Bramblitt said. "It forced me to live brushstroke to brushstroke. Always thinking about paint on the end of that brush, not the future." 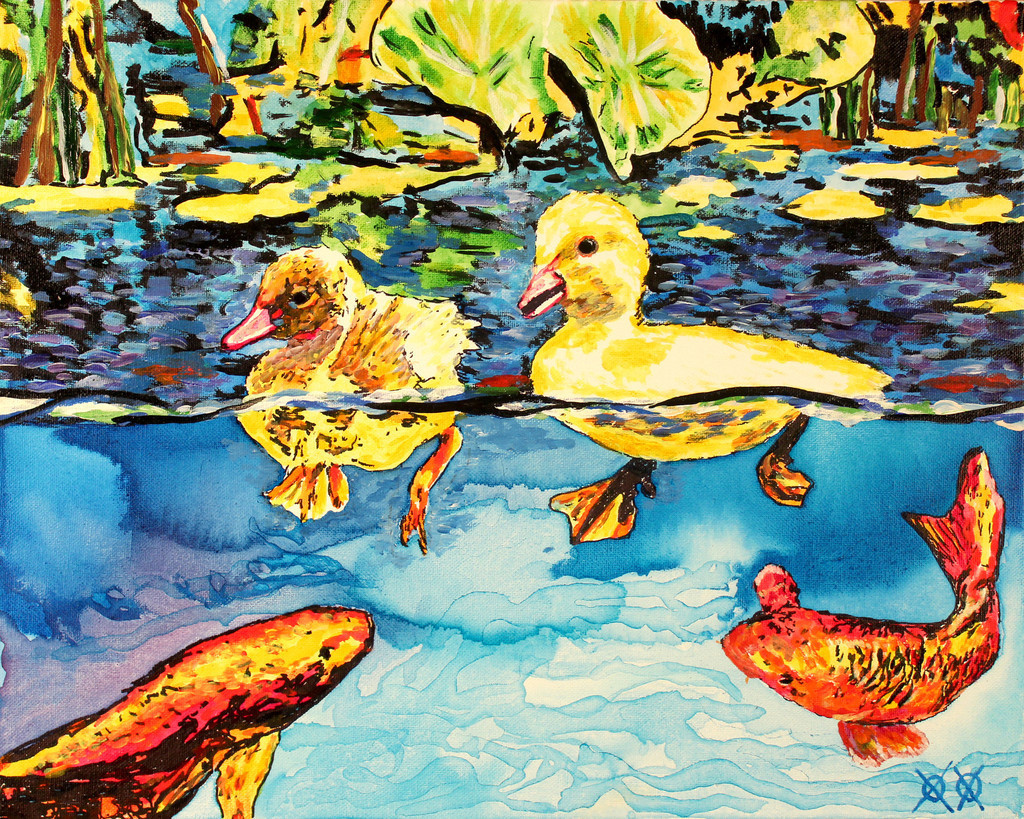 This isn't entirely unexpected, says John Kennedy, a professor of psychology at University of Toronto, whose research has focused on the relationships between vision, touch, and pictures.

"Like surfaces and edges, expression is visible and tangible too. Consider a tense body. Or a relaxed hand. Or a head bowed in sorrow. These are tangible as well as visible," Kennedy told HuffPost. "Blind adults and children have the same feelings and need for expression as the sighted."

Though Bramblitt can no longer see color, shape or form, he still retains light perception. Think of it the same way as you can't "see" anything if your eyes are shut tight, but if you were outside you could still sense whether it was day or night. That's what his world is like all the time. 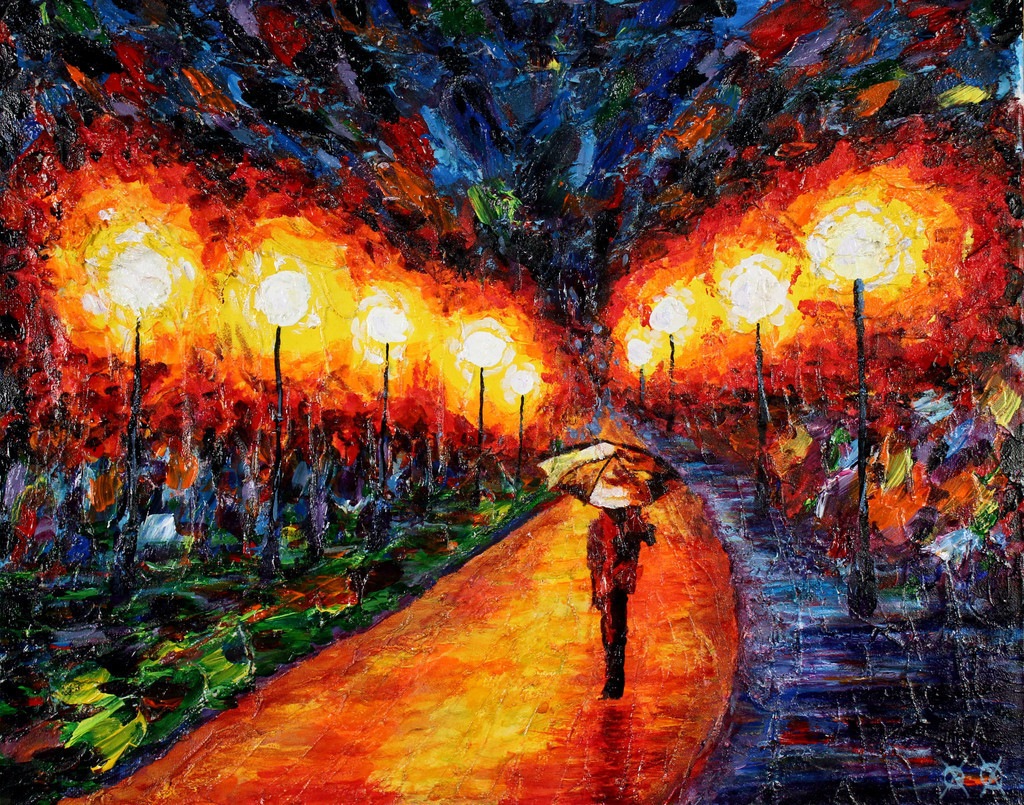 He lives with his wife Jacqi Serie and his son Jack, 7, named after painter Jackson Pollock. Serie's favorite painting of her husband's is a stylized portrait he did of her titled "Muse." "It had so much energy with all the different colors he used in my hair," she recalled. "There's true emotion there, and that really speaks to me."

"The challenge [of his blindness] just becomes part of life, eventually you barely even think about it," she said. "If he bumps into something when he’s walking, I feel bad. It’s the everyday little stuff that provides challenges. But if anything, the blindness makes him a more attentive and loving father. Everything about living is treasured with him."

On his website, Bramblitt describes how his sense of touch allowed him to fully understand Jack during his first minutes of life.

"I was able to feel his face moments after his birth and laid upon his mother’s stomach. I felt as he took his very first breaths. I very well may have been the first blind man in history to have this experience because of the touch to site techniques," Bramblitt wrote. "Techniques that allowed me to see my son’s face in exquisite detail -- detail that would allow me to remember every bend and twist of his ear, the exact placement of the wrinkles on his hands, the spacing of his lips as he made his first sounds. Details that might be lost on even the most keenly sighted person." 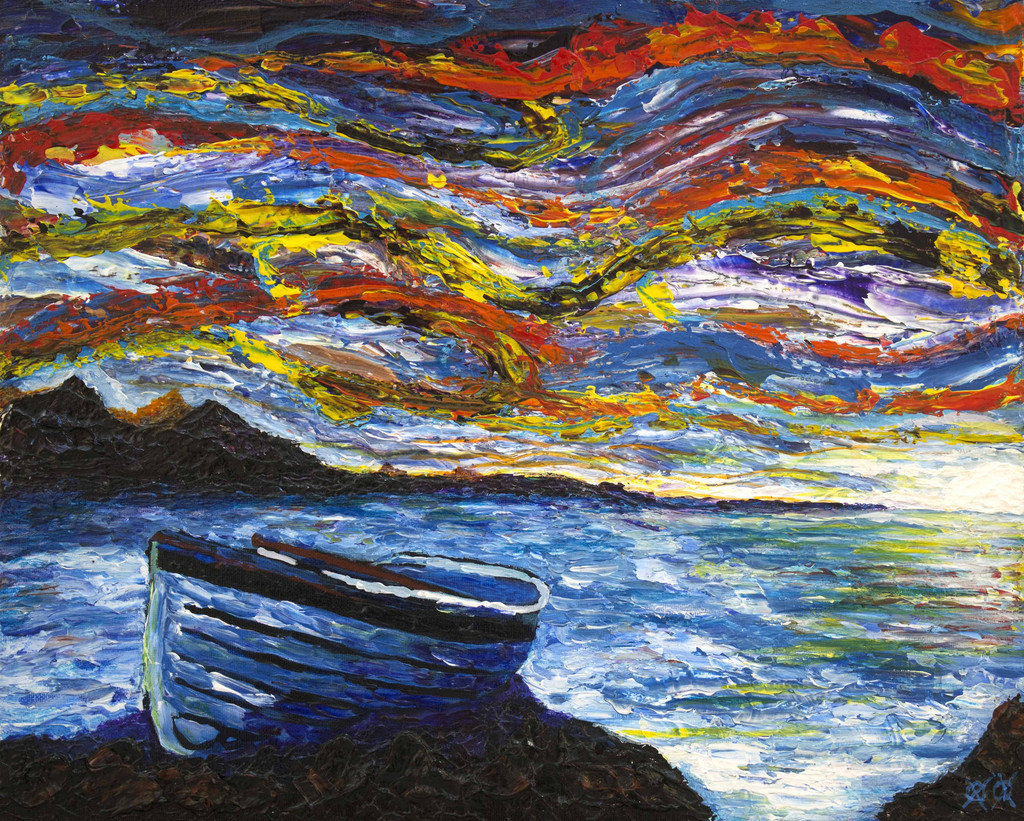 Professor Kennedy agreed that features such as form are, neurologically speaking, just as accessible to the visually impaired, although Bramblitt is exceptional in his ability to translate that back into the two-dimensional format of a canvas.

"Shape is present in vision and touch. Flat, convex and concave are known to the eye and the hand. Walking around we discover the slow rise of a hill, or the steepness of an incline that someone uses as a driveway. Blind people have a similar sense of perspective." Kennedy said. "Perspective is about direction, and direction makes sense to touch as much as it does to vision. Simple but true."

Bramblitt's greatest source of inspiration is music, which is why has has a speaker system set up all around his art studio. He has a rare condition called synesthesia, in which sounds also manifest themselves in his mind as colors. In hopes of gaining a better understanding of what he sees in his mind's eye, The Huffington Post played three recent massive pop hits on the music charts and asked Bramblitt what he visualized. 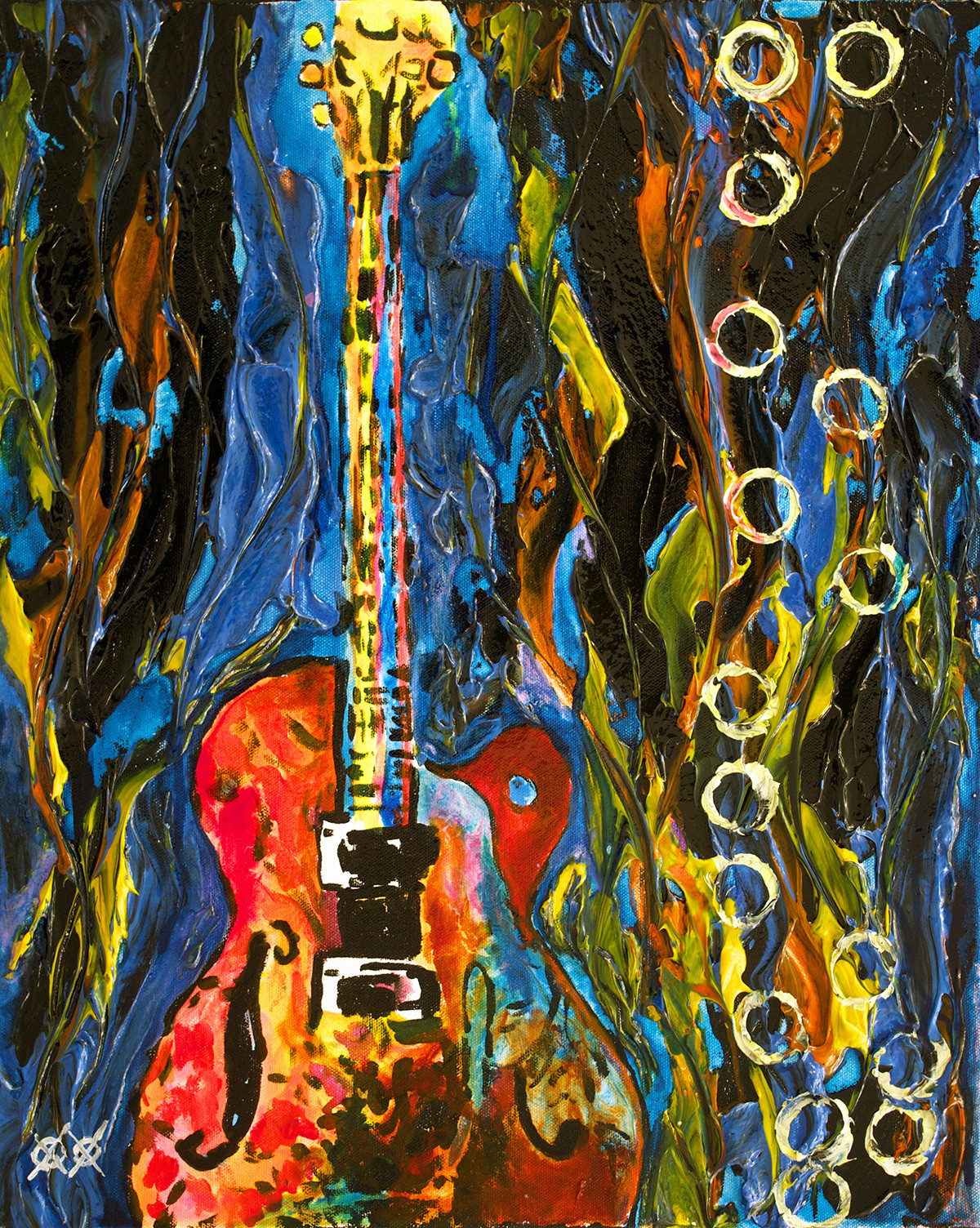 "Uptown Funk!" by Mark Ronson and Bruno Mars produces "a little bit of orange and a little bit of blue at the start, but when the voice comes in I see a deep rich purple, mixed in with a golden yellow," Bramblitt said. "The higher voice and lower bass line contrast with each other, so the colors contrast bright and dark accordingly."

"Blank Space" by Taylor Swift begins with "tan brown colors, very light, almost as if there’s a vanilla. Then it lightens into this yellow, then a hyper-pink with a fluorescent green. On the canvas the pink and green would be along the edges," Bramblitt said. "Energy builds in the song, the more you listen, the more instruments and components are added. So the painting would be done in a way that it builds up, using more texture so it takes longer for your eye to take in, reflecting the time element of the music."

"Thinking Out Loud" by Ed Sheeran "starts out with brilliant blue fading to a violet at the bottom of the canvas. It also has a lot of white on the background, reflecting the sparse instrumentation and production." 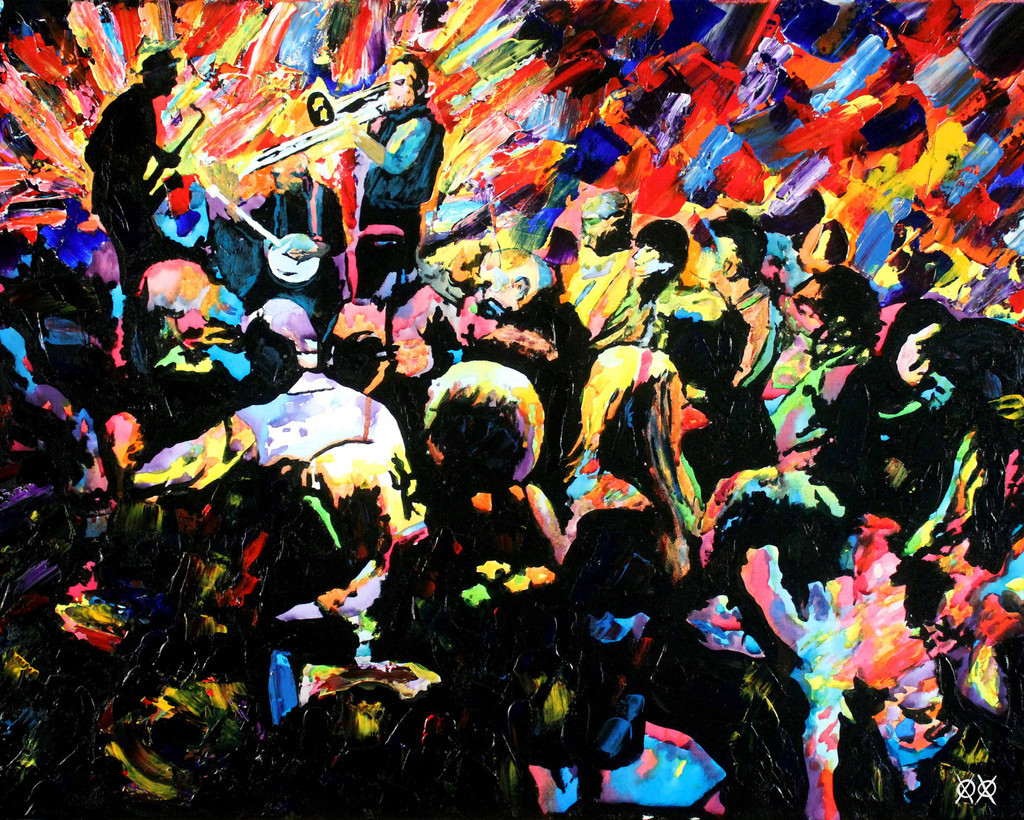 Bramblitt has produced more than 300 paintings since his sight was lost. He insists that his blindness is not a drawback to his appreciation of life at its fullest. If anything, his other senses are heightened as a result.

"In truth, in the cafe that day, the music coming from the speakers colored the air; the conversations and laughter drifting from the tables did the same. The smell of the perfume from the woman sitting next to me was like clouds of rose and violet. The rough wood grain of the middle of the table had a different hue than the worn edges," Bramblitt wrote on his website's frequently asked questions page. "I think it’s ironic that in that coffee shop I would probably be the last person that anyone would ask about color, but I might actually be the one appreciating it the most." 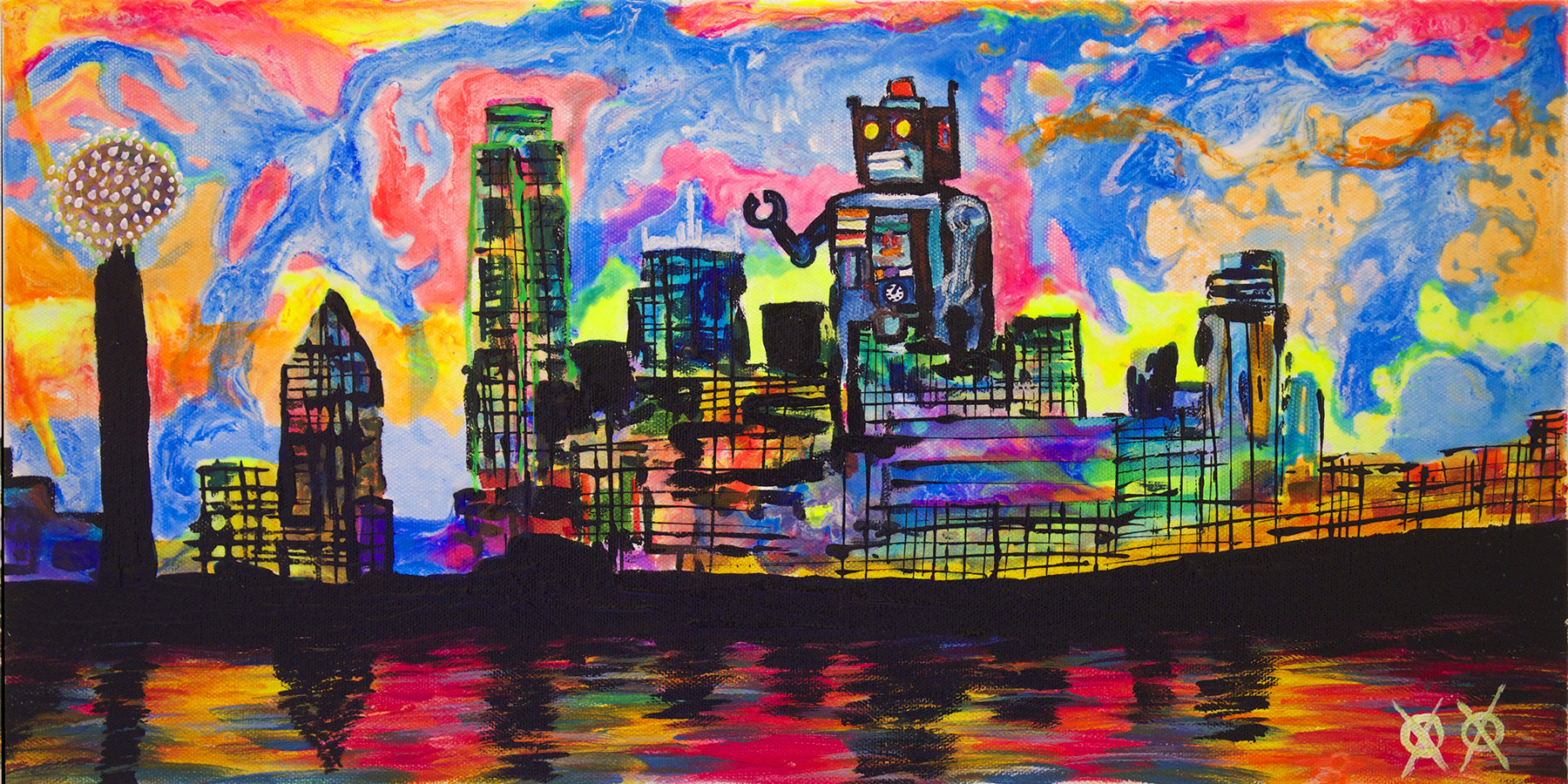 Check out more of John Bramblitt's artwork on his official website.