If painting articles and blog posts from the past month are any indication, our interest in abstraction and figurative painting has never been more vigorous - and the boundary between the two has been the subject of two actively blogged about exhibitions.

In his essay on Abstract Critical describing Fade/Away Art of Transition, Barry Schwabsky notes, "the fact that so many painters today are working along the broad and very porous border between abstraction and images is a sign that this boundary is, in itself, an object of great fascination."

On the blog Abstraktion, David Moxon posted about another show A Sort of Night to the Mind, A KIND OF NIGHT FOR OUR THOUGHTS. Moxon describes how the exhibition of 23 artists "demonstrates the recurring relevance of illusion and in counterpoint, materiality" and "the productive play between these two qualities of a marked surface... has brought this group of works together."

Perhaps Karl Klingbiel, quoted in Edward M. Gómez' article Abstraction's Ambiguity is Its Own Reward best sums up what all painters, abstract or figurative, attempt in their work: "My paintings become vessels for what interests me, including literature, poetry and the history of painting, but they also have an outward trajectory, because with them I'm trying to replicate the experiences I've had looking at paintings that have had an effect on me."

You'll find more posts on abstract and figurative painting in May's top ten, too, from Paul Behnke's tour of abstract painting shows in Brooklyn to Sheldon Tapley's review of the exhibition Narrative Figuration on AEQAI.

Find more everyday on painters-table.com - the magazine of the painting blogosphere. 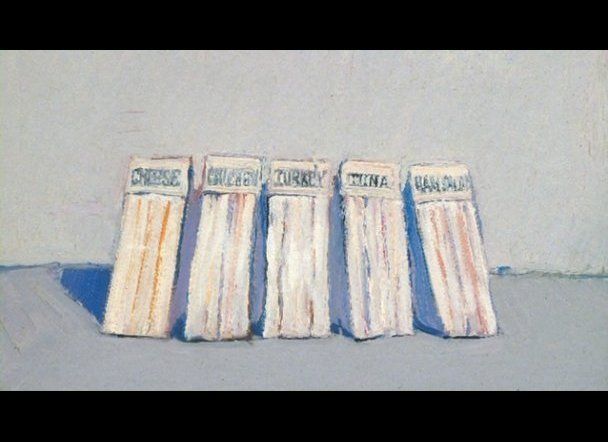 1 / 11
Wayne Thiebaud on Morandi
<em>Wayne Thibaud, painting of sandwiches, source: Victor Loh on Vimeo</em><br><br> Larry Groff posts a video of Wayne Thiebaud discussing his work and the work of Morandi. In addition to revealing the direct influence of a Morandi painting on an early painting of sandwiches, Thiebaud discusses a variety of topics including caricature: "If you take something like caricature for instance, which is very much a central aspect of all painting, then caricature represents a way in which, probably, stylistic variants can be determined. If you use caricature in terms of someone like Bonnard - or Morandi - they're caricaturizing their forms, and that makes them unique, gives them a new identity."<br><br> <a href="http://www.mambo-bologna.org/en/museomorandi/mostre/mostra-80/" target="_hplink">Wayne Thiebaud at Museo Morandi</a> is on view through October 2, 2011.<br><br> <strong><a href="http://paintingperceptions.com/notable-painters/wayne-thiebaud-at-the-morandi-museum" target="_hplink">Read the full post at Painting Perceptions</a></strong>