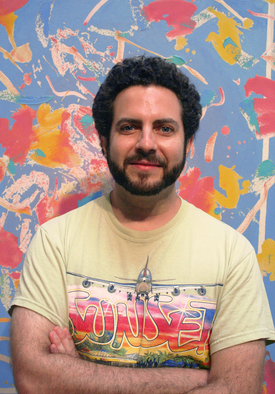 A Studio Visit with Christopher Kuhn

Before I settled on becoming a visual artist, there was a time when I wanted to be a professional musician. I joined a jazz band led by a true relic of the big band era and was introduced to freewheeling structure of jazz from one of the period's greats. I learned a lot of things (including that I don't have what it takes to be a jazz musician) but what has stuck with me are the components that are needed for jazz: understanding of structure (and "the rules") and gaining the ability/skills to invent and break the rules to come up with something extraordinary.

In a jazz chart, the band begins laying the groundwork -- establishing the beat and setting up the basic foundation upon which the soloists float their improvised creations. While this improvisation happens on the fly, its takes years of practice. You need an embedded knowledge of the chord structures, the ability to own the rhythm, and have the confidence to jump without a net. I bring all this up because I see a direct parallel in jazz and Christopher Kuhn's work. Kuhn's work involves all the characteristics that you need in jazz - rhythm with experimentation, structure with surprises, and some serious chops.

VB: I'm interested in talking to you about the roles that intuition and intention play in your work. How much of your process is dictated by each step, and how much of it is planned ahead?

CK: They definitely start spontaneously -- generally cleaning brushes off and I'll find some canvases that are prepared and just make marks to not waste paint, basically. I'll make some moves without thinking about it so much. As that builds up, eventually I respond to it and in the best works there is this balance between the spontaneity and some controlled elements. Sometimes you lose the spontaneity - you employ strategy and it fails so you try something else and that fails, and eventually you've lost whatever essence was there in the beginning. But you don't show people those.

By including spontaneity, does that make the process riskier or easier?

It can be pretty risky. It takes a certain steadfastness, I guess. When I first started this method, because there's such a risk of failure -- sometimes I would get down about it. Sometimes there'd be a work I really liked and I'm really excited with where it's heading and then suddenly I mess it up and then I get all down. But over time I started to view what (in the moment of making the piece) I would think of as a failure, eventually as a stepping stone towards the resolution. So over time I gained more confidence and more surety to trust myself and not get so worked up in the moment. 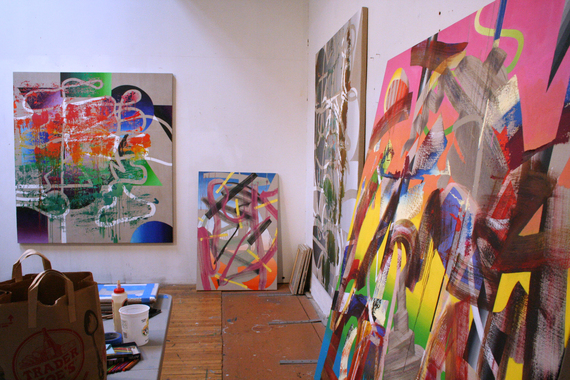 As a fellow painter, I'm interested in hearing your perspective on paint as a material and as your medium of choice. What do you think are the capabilities of paint? And what are its limitations?

Well, I definitely came to art through art history. So, I do honor the tradition of painting, and I'm not so concerned with trying to push its boundaries, or fracture the picture plane, or try to make it sculpture, or blur these lines, which a lot of contemporary art does. I do embrace the limitations of the square or rectangle, the fabric support and the material itself. I find what interests me about paint, and I guess the painted space or image, is that you can create spaces that read logically to your mind, and your mind and eye accept them, but when you really look at it, it doesn't necessarily make sense. The space that you've constructed logically in the world we know is impossible, but in a painting it's fine, and its agreeable and acceptable. 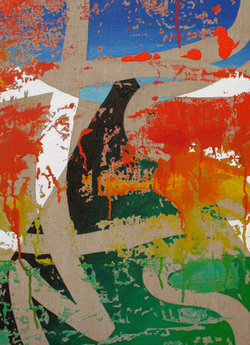 The more familiar I become with your work, I am able to see that you address a wide range of formal propositions, which I assume is to both challenge yourself and to keep it interesting. Do you attempt to work within a consistent set of elements? Or do you actively try to work out something different with each piece?

Before I was doing abstract painting, I was doing representational work. I enjoyed the finished product, but I didn't really enjoy making them so much. When I was in Boston, there was a show at the Museum of Fine Arts of Cecily Brown, and I saw those paintings and they looked like so much fun to make. And maybe she tortures herself while making them, but for me, seeing them, it looked like wow! that looks like so much fun! I'm not having fun painting; I want to try something else. I slowly headed towards abstraction, and once I finally went for it, what I liked was the unpredictability of it. Since I didn't know what I was making, it was always challenging and always kept me on my toes.

When I find myself falling into formulas, that's when I try to change things up. Since I'm experimenting in a lot of the work, I learn new things, new tools, new strategies, and over time I've learned how to employ specific strategies to their strongest impact. It's honing your skills, and finding these tools and knowing when to use the tool. You're not going to use the hammer for the screw, you use the screwdriver.

What's you're favorite part of the process?

Hmm. I really don't know, I kind of like it all: being in the studio; looking at the work; making the work. I suppose when I'm really in a painting, some of the larger ones they can take six hour sessions over multiple days, I know what I'm doing in that case - it's just filling in all these areas, so it becomes very repetitive work that's almost meditative, in a way too, when you're not thinking about what you're doing. My mind really wanders then and sometimes I think of old memories...it's very unconnected to where I am in the studio. I think why the hell am I thinking of that right now? That does happen a lot in making work, and I do enjoy that because it takes me to places I don't go otherwise.

So what's the most unlikeable part of the process (if there is one)? Or maybe the most challenging?

What do I want to have for lunch? That's the great question: what do I feel like eating? 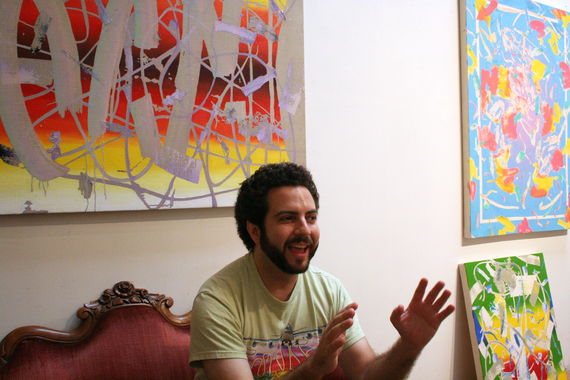 How do you think about other people's relationship to your work? Do you consider them? Or is the value in the satisfaction you get in making the work?

There are certain times while making work when I start to see where the work is headed and that it's starting to encroach on other artists' turf, in a way. I'm conscious of that - so that's an idea of other artists or other people. But I don't let that stop me necessarily, because I don't know where that trajectory is going to take me, so maybe I'll just step a few steps in somebody else's area, but in order to get to a different place that's mine again.

Otherwise, I don't necessarily think of the viewer so much. I am the viewer myself so I'm trying to make something that pleases me, and then hope that it will please other people in that process.

Tell me about your show coming up here in LA - what's the title for the show?

Material Witness. It's a legal term, I have this list in both my phone and here in the studio for when I hear things on the radio, or while watching TV, and think: painting title! and sometimes I think it could be a show title. Material Witness was one of them; it has no relation to art, really, it's a legal thing that means a witness that can have the potential to change the outcome of a case. But I like it as a poetic metaphor, meaning the material obviously- the paint, the canvas - and the idea of the witness testifying, like the paint and the canvas testify to (in this case) the creation of the work itself. Hopefully in certain paintings you can read how the painting was constructed. In this case the material is speaking for itself.

Christopher Kuhn's solo show "Material Witness" opens at Sonce Alexander in Los Angeles on November 1st, 6-8pm and will run through December 6, 2014. Kuhn also has a solo exhibition on view at FIELD Contemporary in Vancouver, BC on view through November 22, 2014. His work can also be seen on his website. 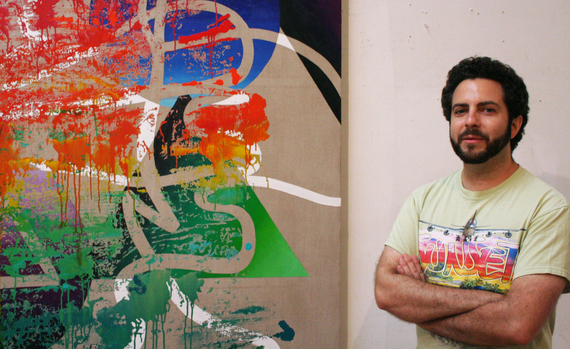 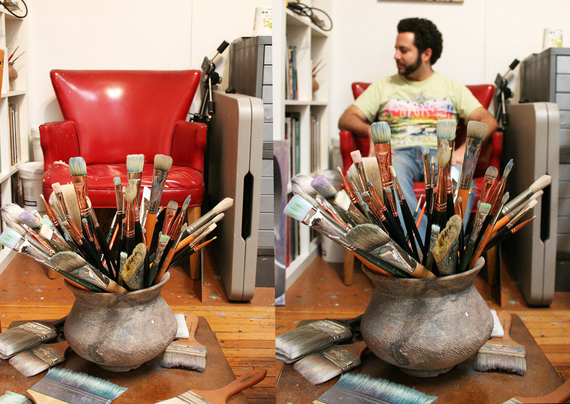 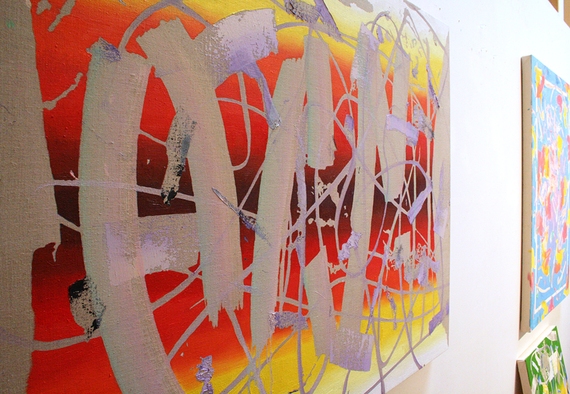