As the weather warms and tourists descend on the nation's capital, 12 Pakistani women will be among the thousands of visitors in D.C. this week. But they aren't here to see the cherry blossoms or tour the White House. They're here to meet with US policymakers to propose solutions for how the US can help end extremist violence in Pakistan, a country that has lost 35,000 civilians to terrorism since 2001.

The delegation of women will be meeting with key policymakers from the State Dept., USAID, and Congress to recommend how US foreign policy can help support Pakistan's very active civil society, which is mostly led by women.

The delegates are representatives of Amn-O-Nisa, the Pakistan Women's Coalition Against Extremism, launched in October 2011, to address instability and violence in Pakistan.

We applaud these courageous women and thank the US Embassy in Islamabad and Meridian International Center for their support in making this delegation a reality. 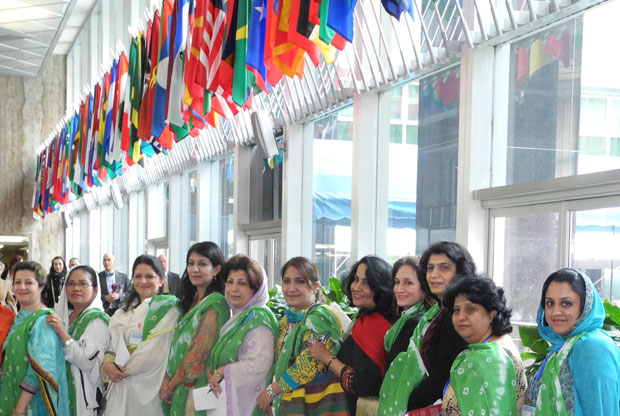 Pakistani women leaders gather at the State Dept. before meeting with US policymakers to propose solutions for how US foreign policy can help support Pakistan's civil society in ending extremist violence. The delegation of women are a part of Amn-O-Nisa, a coalition supported by The Institute for Inclusive Security. (Inclusive Security / Allison Shean)

She was a lecturer at Peshawar University in 1990, when just four of 180 professors were women, and has continued to break new ground. "Working with conservative religious clerics, we were successful often when we thought we would fail. Often, our own fears are the only thing stopping us from reaching out."

As a self-appointed local "peacekeeper" in the district of Rajanpur, she mediates between Sunni and Shia sects by convening meetings with religious leaders to discuss peace and security. She has convinced both communities to form peacekeeping volunteer groups comprised of young men who safeguard religious precessions and ceremonies, successfully diffusing tensions and reducing violence in the district.

Naziha Syed Ali is a freelance journalist and documentary film producer who focuses on human rights abuses and the rise of religious extremism in Pakistan. She has written extensively about militant organizations and the victims of terrorist violence, and has researched education and madrassa culture in Pakistan.

Ali organizes seminars, festivals, and media campaigns that promote peace and freedom of expression. In early 2011, she helped organize a signature campaign and a cultural festival that drew over 30,000 people to Karachi to denounce hatred and intolerance.

As a child in the war-torn region of Kashmir, Farhat Asif's father told her "conflict cannot end by starting another conflict, but through peace and dialogue." Motivated by his words and a desire to bring peace to her homeland, Asif later founded Pakistan's first Arabic/English bilingual magazine. The theme of the magazine is peace through informed dialogue, and it strives to promote understanding and tolerance.

Prior to establishing the magazine, Asif worked at the Islamabad Policy Research Institute, conducting research on women, peace, conflict, and development in Afghanistan and Pakistan.

Dr. Tahira Baloch is an operations officer for the World Health Organization, where she coordinates public health programs and oversees health emergency and disaster management projects in Balochistan province. She also manages the provision of free maternal health care to women at the district and provincial level.

Baloch has worked for numerous UN Missions around the world and serves as a council member on the Human Rights Commission of Pakistan. She conducts research and focus group discussions and convenes roundtable meetings with policymakers to convey the population's grievances and to advocate for sustainable solutions.

Living in Pakistan's most remote and volatile region along the border of Afghanistan -- Khyber Pakhtunkhwa (KPK) -- Bushra Hyder has experienced first-hand the effects of increasing extremist violence in her homeland. Yet she says, "when terror comes to your doorstep, you cannot fear it; you cannot tolerate it anymore."

Hyder established and directs her own high school that teaches students about other religions and cultures, promoting compassion and understanding. To help her community cope with frequent violence, she has created student "peace clubs" that visit a nearby hospital to meet with survivors of bomb attacks. Hyder also conducts trainings with young women on leadership, conflict transformation, peacebuilding, and microenterprise, and lobbies local government and religious officials to implement peace curricula in schools throughout the region.

Born in Rawalpindi, Huma Chughtai is a freelance consultant with over 25 years of experience working in the areas of governance, gender and development, parliamentary capacity, judicial reform, and human rights. Chughtai practiced law and then served as a legislative researcher for the National Assembly of Pakistan, focusing on Sharia law, constitutional, legal, and judicial issues, women's rights, and parliamentary practices. At times, she serves as legal advisor to the Ministry of Women Development and the Women's Parliamentary Caucus.

As a trainer for PAIMAN Alumni Trust, she teaches men, women, youth, and students about conflict resolution, peacebuilding, and human rights. Drawing on her expertise in Sharia law, she emphasizes the peaceful elements of Islam and links international conventions with Islamic tenets to counter the radical arguments that fuel extremism.

Sameena Imtiaz is an avid proponent of education to counter extremism. She leads training courses for youth groups, teachers, clergy, and community leaders to promote tolerance and nonviolence. She has authored school curricula and teacher training materials that promote cultural diversity and interfaith harmony, and she advocates for their implementation in religious and education institutions. She counseled the central government to include peace education in standard curricula and has pushed for the same goal at the provincial levels since decision-making on education was decentralized.

Despite limits on women's mobility in FATA and Swat, Rafiq travels extensively to assess community needs. She has gained the trust of local leaders and has unusual access to the homes of families in these communities, even using kitchens as safe meeting spaces for groups of women to discuss how they are affected by extremism. Rafiq also meets with local government officials, parliamentarians, policymakers, and religious leaders to advocate around women's issues, peace education, and conflict resolution.

Farida Sadiq is an independent consultant and master trainer with over 12 years of experience in the field of conflict resolution, democracy, and governance. Sadiq conducts trainings and advocacy sessions with youth and local communities on conflict transformation and peacebuilding. Through these sessions, she has formed groups of "peace practitioners" who advocate for non-violence and help diffuse tensions among neighbors, families, and communities.

She advocates to religious leaders in Punjab province for the inclusion of peace curricula in Pakistani schools. Sadiq also trains district councilors, government secretaries, and women seeking elected office on gender sensitization, voter education, women's empowerment, and leadership skills. She has trained more than 9,000 women leaders, the majority of who were eventually elected to office as district councilors and parliamentarians.

Sonia Sahar has over 11 years of experience in the development sector with expertise on gender, women's health, and women's political rights. She has worked extensively with political parties, government officials, and elected representatives to combat violence against women, advocating for the implementation of measures to ensure women's protection in conflict and disaster-affected areas. She provided technical support to Balochistan's provincial assembly to pass the United Nations' Safe Motherhood Resolution and assisted the province's women's parliamentary caucus in drafting their by-laws.

Cross-posted from the Inclusive Security blog.

Writer and Web Manager, The Institute for Inclusive Security