The old adage that necessity is the mother of invention is fully operational in Pakistan. Out of necessity of dealing with a powerful military, which has in the past overthrown civilian governments a few times, a new reality is emerging in Islamabad. The civilian government of Nawaz Sharif has accepted the role of the military as a co-partner in state affairs and the military under the command of General Raheel Sharif has realized the necessity of political institutions for a fragile country composed of complex ethnic dynamics.

Prime Minister Sharif selected General Sharif as the Chief of Army Staff and General Sharif saved the Prime Minister from being overthrown by disgruntled forces. Both Sharifs, the inventors of bipolarity, are popular among the people. Both are calm in demeanor and meet regularly to share common concerns.

The emerging bipolarity is more than a personal alliance between the two Sharifs. The bipolarity appears to be gathering the approval of many politicians, media houses, high judiciary, and most importantly, the people of Pakistan. Except for political puritans who wish to subordinate the military to the civilian government, most political operatives understand that neither generals alone nor politicians alone can take the country forward through the sticky muddle of geopolitical challenges and domestic problems. 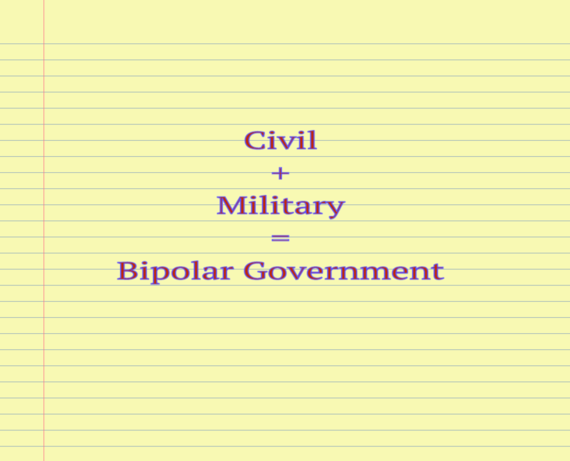 Several factors have shaped the bipolar form of government.

1. The generals have realized that the people of Pakistan do not support military governments and become restless soon after the military coup and wish to restore electoral politics. Long military rules, such as in some Arab countries, are unmaintainable in Pakistan. Pressure for restoring democracy becomes intense when arch-enemy India successfully meanders through periodic elections and mocks Pakistan for its political instability.

2. The generals have also realized that a military government that has overthrown the constitution is more vulnerable to international blackmail from influential countries. For example, General Musharraf, succumbing to the U.S. pressure after 9/11 terrorist attacks, agreed to a set of policies that brought civil war to Pakistan. Furthermore, Western economic sanctions routinely imposed on military regimes that overthrow civilian governments hurt the country and the military itself. Pakistan's nuclear assets also come under scrutiny when there is constitutional turmoil. 3. The politicians have realized that the military enjoys tremendous goodwill among the people. Alienating or ignoring the armed forces in decision-making processes complicates rather than simplifies the mechanics of governing. The military is desperately needed to fight militants who challenge the writ of the state. A peaceful nation with no conflicts, such as Switzerland, has little need for a strong military. Pakistan, a nation at war with a formidable neighbor and surging militants, cannot discount the value of the military. The simple truth is that Pakistan cannot survive without a strong and self-confident military.

4. Pakistan is a highly diverse country with numerous linguistic, ethnic, and cultural groups. The linear military consciousness and the law and order approach that the military brings is useful but inadequate in composing workable compromises for solving problems. Politicians are good at connecting with their respective provinces, ethnicities, and constituencies. Political parties, though messy and unethical, are indispensable for weaving social harmony and diffusing ethnic tensions. A bipolar civil-military government offers a superior platform to deal with rogue factions.

5. With free press and independent judiciary, the cost of maintaining military dictatorship has risen tremendously. It is no longer possible to repress a vibrant media that has taken roots in the last decade. If the military takes over in violation of the constitution, the media houses are unlikely to lay low and accept whatever the generals do. Likewise, the high courts are no longer willing to condone constitutional deviations and military coups. A naked military rule without judicial approval and in the teeth of protesting media would be simply unsustainable.

Political puritans, whether they are politicians, journalists, or judges, might resent a civil-military bipolar form of government. They may invoke the Western model of democracy or even the Indian model to argue that the military has no business in interfering with civilian affairs. Puritans forget that there is no one model of democracy that fits all nations. The United Kingdom works fine without a written constitution while the United States worships its constitution. Pakistan does not work under a linear government of generals or political parties. Pakistan works better when the military and civilians pool their respective competencies and expertise for solving problems.

The emerging bipolarity needs deliberate understanding and protection. It may be easily undermined if politicians or generals step outside their respective boundaries. A willful political leader or a willful military general can easily disturb the balance by overestimating his popularity or intelligence. The military cannot weaken the civilian government and politicians cannot provoke the generals. Regular contact between the ruling political party and generals on duty is critical for the maintenance of mutual trust and conducting efficient and competent government business. The media and the judiciary may serve as vigilant overseers in supporting the civil-military bipolarity.