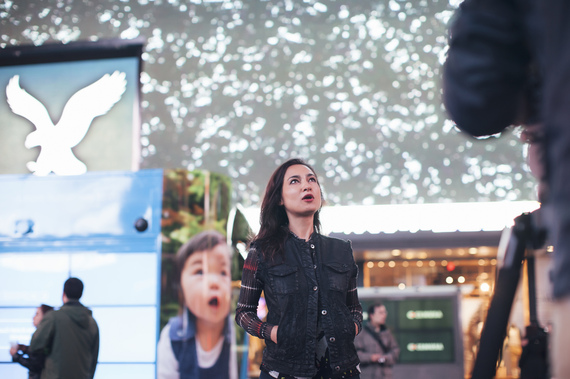 This October, the electronic billboards at the maddening Times Square in New York City will display the creative prowess of Shahzia Sikander, an artist of Pakistani descent who lives and works in NYC. Public art involves space, memory and an aesthetic that travels beyond studios and carefully curated museum ethers. It is also a vehicle whereby an artist speaks to, absorbs the milieu, and even reinvents it.

For any artist, this is a moment of fruition and splendor. Every night, from October 1-31, at 11:57 p.m. sharp, Sikander's animation entitled Gopi-Contagion will add another powerful layer to the skyline of New York City. Not unlike the briskly unfolding stories of the city, the Gopi-Contagion takes the viewer through a fantastic motion of hundreds of digitally animated drawings that swarm and turn into a metaphor for collective performance. There could not be a more befitting tribute to NYC nor a more apt symbol of the energy and undecipherable movement of the urban space. 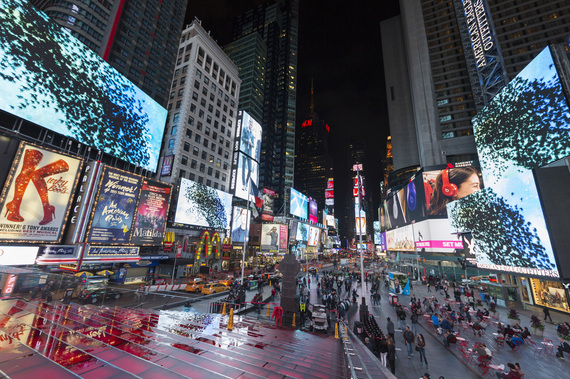 Sikander was born and educated in Pakistan. She was trend setter as an undergraduate at Pakistan's best known art school -- the National College of Arts. In early 1990s, she arrived in the United States to pursue an MFA at Rhode Island School of Design. Since 1997, New York is her adopted home like millions of other migrants who delineate the abundance and contradictions of American life.

Those unfamiliar with the South Asian iconography would wonder what is a 'Gopi' and why should it find space at the heart of a megapolis.

The gopis are the female devotees of the Hindu god Krishna and have been a recurring visual trope in Sikander's work. Krishna is viewed as a divine expression of preserver of cosmos by the Hindus. Legend holds that he was born among and lived with pastoral folk and herders. He was a musician, later a King, charioteer & diplomat and a lover extraordinaire. Mythological gopis were the women in Krishna's community. Some married, others not, and sought to be with him, in body, thought, deed and form, above all else. 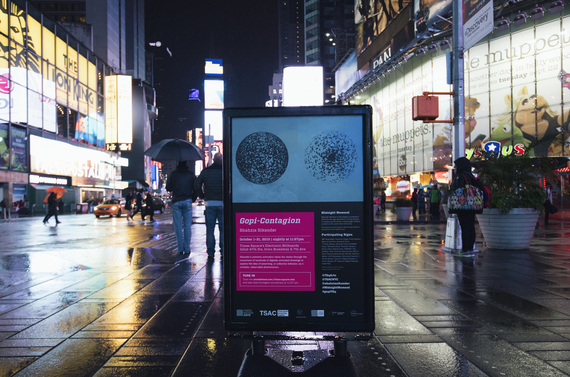 In her animation displayed at the Times Square, Sikander employs the 'hair' silhouette divorced from the female body of the Gopi. By isolating the hair from its associated female figure, Sikander's emphasizes its power and ability to cultivate new meanings. It is not surprising to see that by using such a device, Sikander opens the doors to a larger universe beyond the obvious.

The video piece starts with millions of Gopi-Hair operating as a field of static or white noise. Soon the field starts to descend from top down as the 'grand drape' revealing a horizon line and blue infinite sky. At this stage, the Gopi-hair appear as a large mass of liquid from the surface of which a few hundred take off, creating turbulent swarming movements. It is worth noting that the Gopi-hair silhouette takes on the form of a liquid only when it accumulates in a mass state clearly refusing to lose its inherent identity at the particle level.

When the digital artwork starts to unfold, it strikes you for its dreamlike quality. For one, it is a visual contrast to the hyperactive, in-your-face commercials; and more critically it suspends the viewers' experience making them question what they experienced and why. A viewer's engagement is what is also central to public art. Why for instance, are the birds starting to swarm at midnight on 20 major billboards? What are they? Are they bats, insects or unknown birds? Where did they come from and where did they go? It is but a fleeting, yet discrete experience. Even through it lasts for a few minutes it makes you think, question and engage. 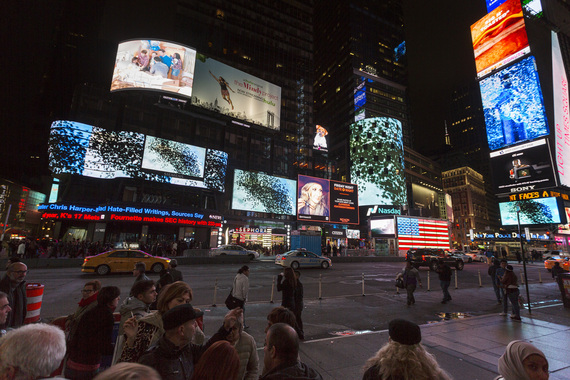 As the image above shows, the Gopi-hair swarms are full of fervor, incomprehensible but omnipresent; hovering covertly above the headline news of college shooter Chris Harper running on the ABC billboards; sandwiched between the Mindy project and the Bank of America and Nasdaq billboards with the U.S. Neon Flag beautifully lit on the side. "The fervor of the swarm was always meant to illicit multiple meanings", Sikander informs me; and "at midnight it is sublime and subversive", she adds with a little glee.

Millions of silhouettes of hair in the animation transform into multiple representations -- ranging from ocean, water and oil to flocks of birds, bats, insects, patterns of human migration and of collective behavior. "The swarming movement themselves are hard to decipher. They are an observable phenomenon yet unyielding to analysis," Sikander adds. 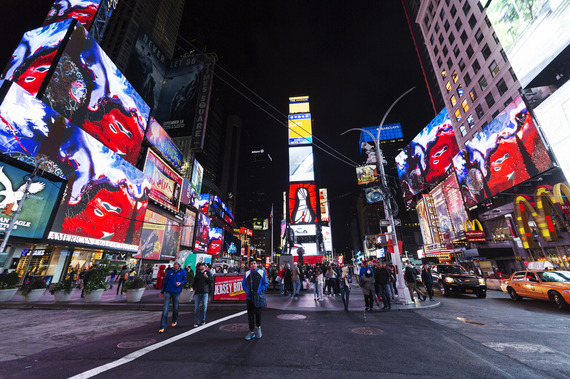 The use if gopi is also instructive. The country of Sikander's origin -- Islamic Republic of Pakistan -- disowns the past that included references from the Hindu belief systems. As an artist Sikander rejects the constructed identity. At the same time, she universalizes the metaphor liberating it from the religious identity.

As a young art practitioner in Pakistan, Sikander pioneered the neo-miniature movement that continues to inform contemporary artistic productions. After moving to the U.S., she experimented further and pushed the boundaries of the traditional Persian-Mughal miniature format. The craft has stayed with her but in newer expressions. Sikander dabbled in street-art using walls as canvas for her drawings, explored the dimensional capacity of tissue paper; and has created three-dimensional wall installations. From an earlier interrogation of her personal histories -- of migration, exile and identity -- Sikander has moved to global conflicts over resources and territory using a variety of media including animation, video, and murals among others. 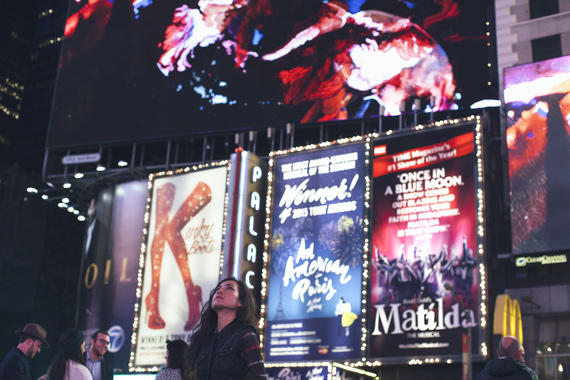 In an interview, Sikander tells me that her work finding a public arena as an exhibition hall "feels outrageously good." She is immensely pleased that the high-tech (and perhaps high cost too) LED panels in Times Square give a new exemplification to her digital animations. "I have been projecting my digital animations on buildings and trees. But to have them be part of Times Square's digital history is astounding", Sikander ecstatically adds. 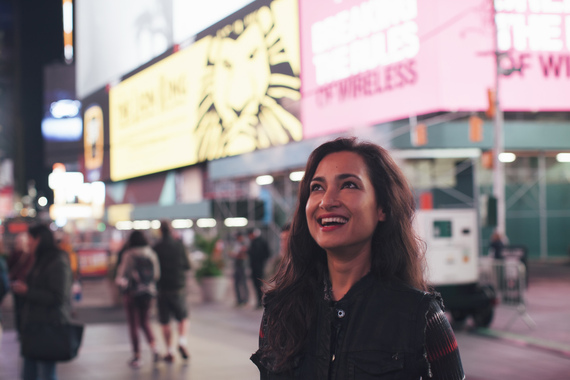 Sikander's arrival on the cityscape comes as a culmination of a series of achievements. In 2010, she was elected as a National Academician by the National Academy in New York City. Earlier, she bagged the Art Prize in Time-Based Art from Grand Rapids Museum (2014), the Inaugural Medal of Art by Hilary Rodham Clinton (2012), John D. and Catherine T MacArthur Foundation Achievement 'Genius' award, (2006-2011); SCMP Art Futures Award, Hong Kong International Art Fair (2010), and Tamgha-e-Imtiaz, the National Pride of Honor by the Pakistani Government (2005). The Newsweek in 2004 listed her as one of the most important South Asians transforming the American cultural landscape. 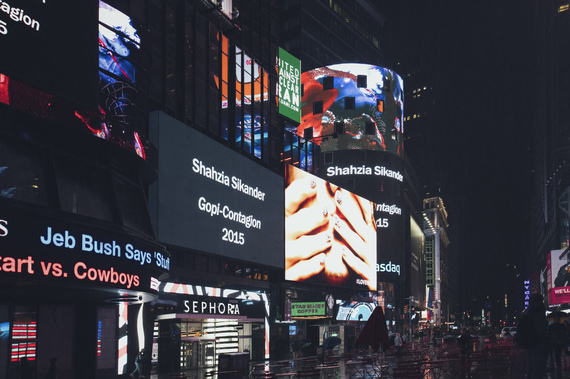 Other than the rich storytelling on Times Square billboards, Sikander's presence is not without rich symbolism. In 2010, a radicalized American of Pakistani origin -- Faisal Shahzad -- wanted to attack Times Square with a car bomb. He was arrested. Like her animation, Sikander also tells the world that not all Pakistanis are cast in the same mould. They, like many other races and ethnicities, are cursed with diversity, paradoxes and multiple contradictory representations. 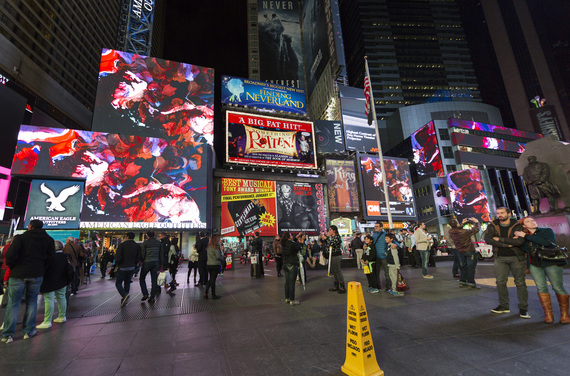 Our Gopi, too, has shed her hair to weave a mosaic of possibilities and has gifted a new, evolving language to the Krishna of world arts. Not as a devotee but as an inventive maestro of her craft.