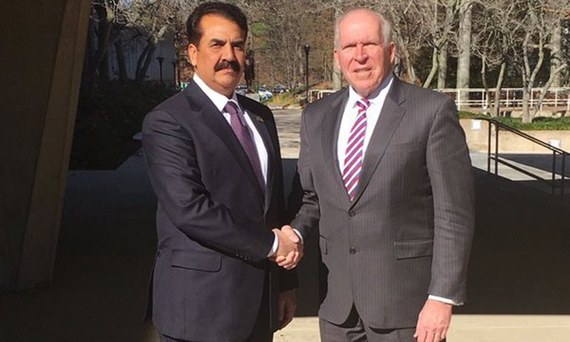 Why is General Raheel Sharif, Pakistan's army chief, visiting Washington right now? Wasn't his Prime Minister, Nawaz Sharif, in the nation's capital less than a month ago? I know you are confident about your guess: The Americans must have invited him to come and discuss the unfinished war on terror. Oops! You got it wrong. According to the Voice of America, the United States government has not invited Pakistan's powerful army chief. To borrow a phrase from the Hindustan Times, Raheel has invited himself to the U.S. The invitation does not matter much but this trip once again highlights the army's brazenly tight grip on the country's democratic government, specifically its foreign policy. A smug Raheel is in Washington with a straightforward message to D.C.'s policymakers: Forget about what was discussed between President Obama and Prime Minister Sharif last month. Let's talk again. I decide my country's foreign policy, not the prime minister.

Before his arrival to Washington, Raheel's army, on November 10th, had solely taken credit for the "improved security situation" but rebuked the democratic administration that the "progress" it had made in the fight against terrorism could not be "sustained without matching betterment in governance and administration."

Although the army has historically been in full control of Pakistan's external relations, Raheel, since becoming the army chief, has staged sort of a foreign policy coup. Prime Minister Sharif, a victim of a military coup in 1999, has been so cautious in avoiding another military takeover that he has even not appointed a foreign minister two years after becoming the prime minister for a third term. On the foreign policy front, the army is explicitly intimidating the prime minister. He cannot take bold decisions or fulfill the promises he makes during meetings with foreign heads of government. The army chief has entered into an undeclared competition with the prime minister over foreign trips.

According to Zahid Hussain, a senior Pakistani journalist, the army chief "has perhaps travelled to more world capitals over the last two years than even the prime minister, reinforcing the perception that not only does the military call the shots on security matters it is also actively directing the country's foreign policy."

"From a democratic perspective," wrote the respected Dawn newspaper, Raheel's trip to D.C. is "discouraging."

Every time the United States negotiates with a general while snubbing a democratic government, it becomes complicit in undermining democracy in Pakistan. The United States has designated Pakistan as one of its non-NATO allies but it does everything that is in contrary to making Pakistan as democratic as its western allies. In a democratic Pakistan, the army chief should practically be answerable to Secretary and Minister of Defense, whose boss, the Prime Minister, is elected by the people of Pakistan. The civilian government's alleged incompetence is no excuse to allow the generals dictate domestic or foreign policies. After all, the United States did not call the National Guard when incompetence and obduracy on behalf of the Republicans and Democrats literally led the United States to a two-week long government shutdown in 2013. The generals at the Pentagon did not intervene or take control of Congress. We let Congress figure it out. That's how you, slowly but steadily, learn the art of democracy.

While justifying Raheel's trip to Washington, veteran journalist Ahmed Rashid, surprisingly cited the army chief's "excellent reputation" because of his "highly effective military operation" against the Taliban. Writing in the Financial Times, Rashid argues, "terrorism across the country [in Pakistan] is much reduced since the army action began 18 months ago."

For several decades, Pakistani lobbyists and scholars sympathetic to the army in Washington have convinced American policy makers to do businesses with the army because it is quicker and more efficient than the democratic governments to "deliver". Deliver? Deliver what? That's where we need to step back and see what the two countries actually expect from each other. The United States wants Islamabad to fight "terrorism". The people and the neighbors of Pakistan want it to fight "terrorism" and Pakistan also claims to be fighting "terrorism". But all of the three parties are referring to absolutely different kinds of "terrorism". Amid all this confusion, [fighting] terrorism has transformed into a profitable industry for the Pakistani army that continues to receive hefty American amounts to fight the elusive war on terror. Hence, those receiving monetary benefits keep perpetuating the menace of terrorism so that flow of American dollars is not interrupted.

While Washington's emphasis continues to remain on action against the Haqqani Network and the Pakistani army keeps flaunting over its successes against the Pakistani Taliban, here is why journalist Ahmed Rashid is wrong in arguing that [extremist] violence has decreased under the leadership of General Sharif.

The dates and figures cited above will probably not worry or surprise the policymakers in Washington because neither the attackers were America's direct enemies (such as Al-Qaeda) nor were the victims Americans. However, these events are important to review as they reflect the larger gruesome picture of Jihadist infrastructure that still exists in Pakistan. By receiving money from the United States and fighting the local Taliban, the Pakistani army is apparently working as a mercenary force for the Americans. Inaction against Jihadist groups like the Lashkar-e-Taiba and Sunni extremist group the Lashkar-e-Jhangvi suggests that Pakistan is selectively fighting the war against Islamic extremism. This approach will eventually pave the way for a new grand alliance between these relatively small jihadist groups and the big ones such as the Islamic State (I.S.) and the Taliban. At this point, these groups appear different and disconnected from each other in their organizational structure, areas of operations but let's not forget that they all mostly have similar backgrounds (for instance, education from the same conservative seminaries) and identical end goals (imposing radical Islam through brute force). In the United States and the West, these Jihadist networks see a common enemy and in radical Islam they find a common binding force.

Thus, those who believe Washington should patronize Raheel for his heroic contributions in the war against Islamists because, in journalist Rashid's word's, the Prime Minister is "slow and overweight and never deviates from his written text", they are making a historic blunder.

Military actions are helpful as long as they remain only one component of a larger strategy to eliminate religious extremism. In the long run, Pakistan needs liberal education, curriculum reforms, democratic stability, civil liberties, stiff action against mosques and clerics who preach hatred, religious schools (madrassa) that mostly produce jihadists and provide sanctuary, food and shelter to some of the world's dreaded terrorists.

No military action is needed to curb and freeze the funding channels for these terrorist organizations. These are administrative measures that the civilian government should take. The task becomes much complicated or unachievable when units of the Pakistani military covertly collaborate with the same terrorist groups. The army must come clean in order to disprove charges of collusion with Islamist terrorist groups, playing double standards while working with the United States and simultaneously abetting the Haqqani Network. Remember the frustrated Admiral Mike Mullen who called Haqqani Network a "veritable arm" of the ISI, Pakistan's primer intelligence agency?

Pakistan needs an army that is transparent and accountable to the Parliament. In order to be a strong and confident country that is capable of fighting Islamic extremists, Pakistan needs strong democratic institutions, separation of the majority religion (Islam) from politics, and deeper commitment to fight terrorism perpetrated in the name of religion. This should be done not for the United States but for the better future of the people of Pakistan. On its part, the United States should help Pakistan achieve democratic stability and the supremacy of the Parliament instead of vanquishing the dreams of its democracy-loving people who voted for a Prime Minister, not an army chief, to represent them overseas.