If you're anything like me -- a moderately enlightened, increasingly curious individual who understands the world around her based on context and corresponding frames of reference -- then you will appreciate how I, a NON-math inclined person, would begin the arduous preparatory task of 9 months of heavy quantitative MBA studies. I'd like to thank the USC Marshall School of Business for admitting me into the Executive MBA program (and for essentially taking over my life for the next 2 years). Fight on.

While immersing myself in spreadsheet modeling, decision science, net present value, marginal analysis and a myriad of other financial theories and concepts, I came upon the wonderful world of probability and statistics. In this world I learned of a man named Karl Pearson who has apparently contributed many valuable things to the average man's world. For example, he founded the journal "Biometrika" whose object was the development of statistical theory (and probably a great name for an '80s electronic band or a busty, brainy, virus obliterating female super-hero). Another example of his contributions is "Method of Moments" in which he introduced moments, a concept borrowed from physics, which is great because if you can't figure out a complex math problem with more math, you should always dumb it down and try to solve it with science. To my pleasant surprise, just by looking into the late great Karl Pearson, I learned some fantastic new words I plan to make permanent additions to my verbal repertoire; kertosis being one and eugenics being another; which as it turns out, does not have anything to do with the science behind the mysterious personality traits of my brother, Eugene, but it rolls well off the tongue. Yooooo-jen-iks! It's up there with eureka and eutrophication, both words I have allowed to collect dust on my under-utilized shelf of colloquialisms.

But the most useful contribution of Karl's I've come across is "Pearson's Coefficient of Skewness." In layman's term, this theory measures the seemingly minuscule changes (skew) from left to right of a specific point in time or activity. This coefficient is important, not in the actual snapshot, but the role it plays in predicting an outcome at a much more macro level. Pennies add up and scale can be the life or death of a business.

As a recently enlightened individual who once viewed any math beyond the basics as useless and impractical, I have delightfully feasted on crow as I understood just how 'ol Karl's theory played into my real life -- and yours (if you are a voting, tax-paying American). And thus borne from the Annals of Jane-isms; a record of ridiculous observations and curious occurrences for-anyone-who'll-listen's ears I give you "Pak's Co-Efficient of Sketchiness". My theory is simple, using the highly scientific method of paying attention and staying awake, I have discovered the marginal differences between "influencers" that overtime reveal themselves to be true servants of people or true scumbags of history. Suffice it to say, the measure of time and circumstance can turn an influencer from the former to the latter, but never in reverse, at least not by my highly sophisticated observation system. (There is a chance I missed it during one of my many snack breaks).

The sketchiness of an individual is measured, like the skewness of any given real-valued variable, by the combination of several dimensions of behavior -- communication based on technicality, obfuscation, ambiguity, tonality, diversion, digression, and ratio of chocolate chips to dough. Of course, the definitive question of "where does sketchiness lie?" is answered by the difference between the normal distribution of clarity and honesty made and expected by the average American vs. the distribution of the same by "influencers". *See Chart 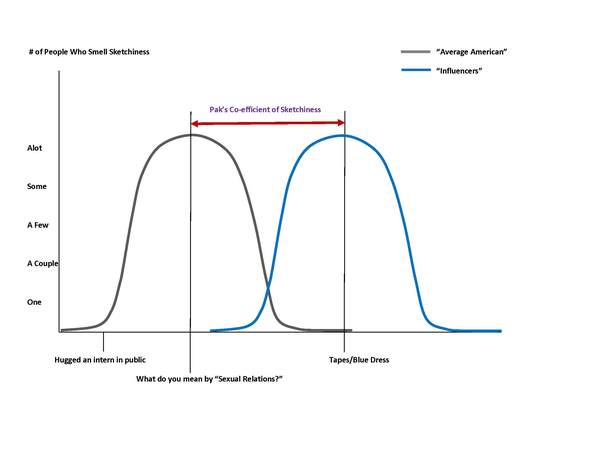 If you're not a visual learner, then allow me to give you two anecdotal examples. I will, in the spirit of being fair and balanced, use two former elected officials as examples: one Democrat and one Republican. That way the same number of people can hate me. Allow me to state: this is not a debate of how good (or bad) a President these people were, these are isolated examples for the purposes of illustrating a point.

Example of "Infamousness" #1 -- "I had no prior knowledge of the Watergate break-in." This statement was made by former President Richard Nixon in his second Watergate Speech on August 15, 1973. Of course, the smoking gun tapes that proved his sketchiness were recorded on June 23, 1972.

Example of "Infamousness" #2 -- "I did not have sexual relations with that woman, Ms. Lewinsky." This statement was made by former President Bill Clinton after" Lewinskygate" become our modern day Watergate. The smoking gun presented itself in the form of a blue dress.

So, these two examples have one element in common that tips the scale into the absolute liar territory -- irrefutable evidence. But not all things that smell funny come with expired dates stamped on them. What about the countless areas in which there is no soiled dress or damning taped conversation to push the needle? This is where the co-efficiency lies and it matters to us all just as years of IBGYBG (I'll Be Gone, You'll Be Gone) practice in Wall Street surprisingly landed us into the sub-prime mortgage disaster. Dismissing the marginal sketchiness within the rhetoric of "influencers" leads us as citizens to sometimes elect unethical people, support biased news networks and buy unsafe products. Which leads to the following conclusion: math concepts are useful in real life and I hope all elected officials within the great state of California embrace that as they answer to the tax-paying public when we ask about necessary spending, bad policies, the future wellness of Californians and why they can't seem to balance a budget. I hope all corporations will embrace this as they find faulty products that kill people (or at the very least, products that make them look silly -- I'm talking to anyone who brought back clothes with shoulder pads). I would hope all news reporting networks would embrace this concept, but some things must remain as true to its original form and in their case, I support most forms of entertainment so long as it doesn't include Rosie O'Donnell.