The report in the Daily News on Wednesday comes just after Paladino told a group of Orthodox Jewish leaders that he opposed schools for what he called "brainwashing" of students into thinking that being gay is just another choice and "not the way God created us."

The newspaper reported that a club named Cobalt operated as a gay bar in 2004 and most of 2005 and was run by Paladino's son, William. It was housed in a building owned by one of Paladino's many companies, Huron Group LLC, the newspaper said. The club was run under another corporate name.

Sometime in 2005, the club began catering to straight clientele, the Daily News reported. 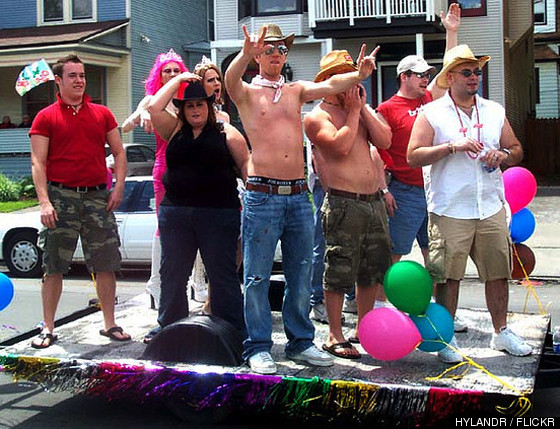 A photo tagged in a Flickr set as "Buffalo Pride 2006" shows a float with "some of the cute guys from Buddies II (the local bear/leather bar)." From 2005-2006, Buddies II operated from a Paladino-owned building. On Monday, the GOP candidate called gay pride parades "disgusting."

The newspaper said liquor license records also showed that the other club, Buddies II, operated under the name Queen City Entertainment in another Paladino building in 2005 and 2006.

Buddies II described itself as a "bar where anyone and everyone is welcome (and) prejudices are left at the door," the News said.

Paladino's spokesman, Michael Caputo, did not immediately comment on the report.

The report comes a day after Paladino apologized to the gay community for what he called his "poorly chosen words," in his speech to the Orthodox Jewish leaders. He said Tuesday he should have edited more of the phrasing out of the speech he gave Sunday.

Paladino said he opposes same-sex marriage but would actively recruit gays to his administration. He has also mentioned his gay nephew in saying that the discrimination he and others face is a "very ugly experience."

In a brief telephone interview with the New York Post, the nephew, Jeff Hannon, said "Obviously, I'm very offended by his comments." He declined further comment.

The 23-year-old has not been seen at his uncle's campaign headquarters in Buffalo where he works since the remarks, the Post said.

Paladino has blamed some of the latest controversy on press reports that included phrases that were in an earlier version of the speech that the Orthodox leaders had distributed to reporters but that he had struck out before delivering it.

Yesterday I was handed a script. I redacted some contents that were unacceptable. I did also say some things for which I should have chosen better words. I said other things that the press misinterpreted and misstated," Paladino said in a Facebook note. I sincerely apologize for any comment that may have offended the Gay and Lesbian Community or their family members. Any reference to branding an entire community based on a small representation of them is wrong.