Mushy. Unfortunately, that is the word that many people would use to describe the consistency of Indian food. Of course, Indian food could also be described as exotic, spicy, and aromatic. But the soupy texture that is prevalent in many of India's curries, kormas, and lentil dishes can sometimes give the misimpression that all Indian food tastes the same, or that you can only enjoy those eye-opening flavors if you're willing to chase the food around your plate with a piece of naan. Although there really is a great deal of diversity in the saucier realm of Indian cuisine, I sometimes crave those flavors in a lighter fare. It is in this spirit that I put a crunchy twist on one of my mushy favorites -- Palak Paneer, a creamy spinach curry with paneer cheese. Here's my recipe for a salad that is inspired by the traditional curry. I may even slip it onto my Thanksgiving table this year -- no spoon or bread needed! 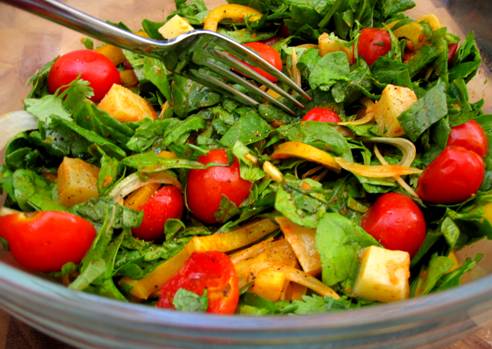 (To save time, you can perform steps 1-3 several hours ahead of time -- just refrigerate the marinated ingredients until you're ready to toss in the greens).