I've missed you, readers. Since I left my role as editor of the Education and Impact verticals of HuffPost last June, I've been working full-time with my nonprofit, The Tiziano Project. From January until May of this year, my team and I traveled to Ramallah, in the West Bank and to East Jerusalem, training Palestinian community members how to tell their stories through new media.

Since returning home, I've been asked over and over again, "Palestine? What was that like?"

Luckily, as journalists teaching multimedia, we've documented our trip pretty well. My colleague, David Freid, created a short documentary piece that I've featured here, that I believe well documents the mood we understood from Palestine at this time: gritty, determined, hopeful and harsh.

Video Portrait | The West Bank from The Tiziano Project on Vimeo.

However, what I've continued to think about since returning to Los Angeles is how the acts of conflict between Israelis and Palestinians were so predictable, and what that means to finding any ultimate resolutions.

I wanted to share one small slice of my experience with this.

The particular moment I wanted to share is about Land Day, a day that commemorates a protest in 1976 against the first Israeli settlements in Palestinian land in which six protesters were killed by IDF and police. Palestinians have commemorated it every year since then, mostly peacefully, in honor of the people who died and the land that is still lost.

The goal organized by activists this year was for the Palestinians to march through the barrier checkpoints from the West Bank to Jerusalem.

Predictably, the IDF preemptively shut down the crossings between Israel and the West Bank. They also shut down the country's borders, and one person died during protests trying to get in.

On Land Day morning, we decided to observe the Damascus Gate protest in Jerusalem. Protests happen all the time, mostly in the West Bank, but also in East Jerusalem, where Palestinians live.

When my colleagues and I arrived, it was a rather tame affair. In fact, we couldn't tell who the protesters were. There were a bunch of Red Cross people, a few from a Christian relief service, a ton of journalists, and then some young Palestinian men chilling with their friends. They, we supposed, were the protesters. Mixed among them were dozens of soldiers, on their phones, smoking cigarettes, riding horses around and eating falafel.

The guy who sells sneakers at Damascus Gate didn't even bother to pack up for the event. He and the falafel and schwarma guys were actually doing a brisk business. Behind all of us, toward the parking lot, more soldiers waited in riot gear, and leaned up against a Skunk Truck, an armored vehicle that sprays foul-smelling water out of a cannon on protestors if they get too rowdy.

We waited for a while to see if anything would happen. And in time, it did. A public bus, heading on a route that ended in an Israeli settlement, drove through the street, and the middle of the protest. The Palestinian guys I had seen earlier jumped into action, stamping out their cigarettes, cheering and running at the bus, which was empty, to tie a Palestinian flag to the front of it. You can imagine how the soldiers reacted. They ran after the guys with the flag, then everyone started running after the soldiers, and that's where it got messy.

It happened fast, and we pieced it together afterwards.

The IDF cornered the flag-bearer into a bus station, along with hordes of onlookers circling, and tried to cuff him. But from above the station, other Palestinians started throwing down homemade smoke bombs, and stoning the soldiers with debris.

The soldiers countered by shooting with stun grenades, which are grenades that make a loud noise with smoke. At the time, because everything happened so quickly, I wasn't sure if any of this was live ammunition, so I reasonably found a big wall to shield me if needed. But all around me, everyone was cheering and laughing and running around, like they had just won a soccer match.

I looked up to see one of my students, smiling, run by. He yelled as he passed, "Hi Miss Victoria! How are you?"

I couldn't help but laugh, then ran the other way as one of the smoke bombs landed next to me.

Things settled down quickly enough. I found my colleagues that I'd lost during the skirmish. They were fine, and equally surprised. The troublemaker was escorted to a line of other prisoners, by a soldier who had him in a headlock with a grenade in one hand and his other hand's fingers through the pin so he wouldn't try to run. 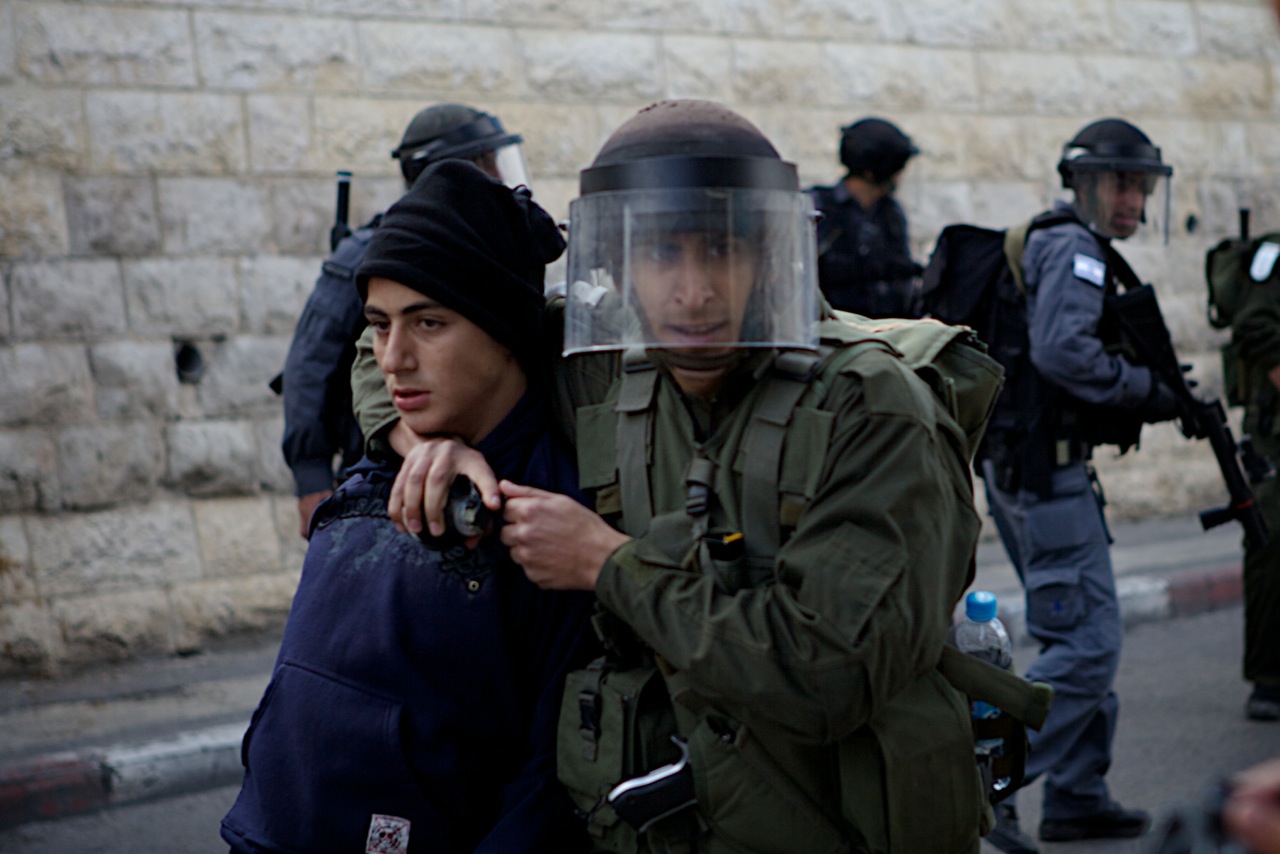 In the street, people were hanging out again, just as jovial as before, if not more. We watched the single injured person having their leg bandaged (with about 30 other press people). Then we bought three bottles of coke from a minimart owner who hadn't even bothered to close his metal gate during the scuffle.

"How are you today?" He asked me, as if I had just come back from touring the Church of the Holy Sepulchre.

He popped the tops off, gave us curly straws and asked if I wanted anything else. Then he wished me a nice day. I told him to stay safe and he smiled. Business as usual.

The whole encounter had shocked me first with the noise, and then with the routine. Everyone, post-fray, just seemed so blasé. The police, the protesters, the aid workers -- each knew their role and started packing up to go home once they knew their work was over. 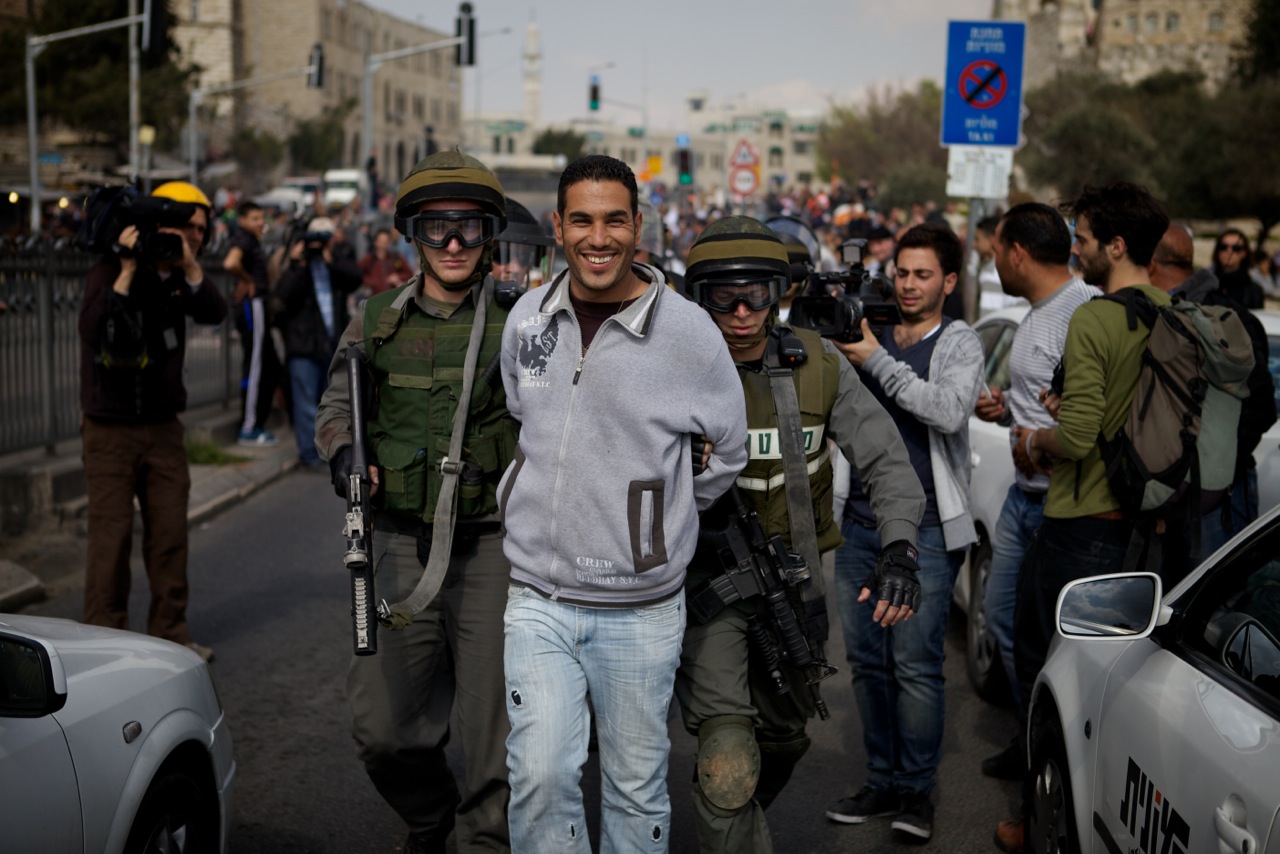 We caught up to our student, who was happy to show off his protest pack. He unloaded it for us as another student of ours broke out a portable speaker and MP3 player, which he blasted pop music from as we walked.

The backpack was filled with things a Palestinian youth needs for a protest and had been refined with practice. Alcohol to spray on your keffiyeh to breathe in the skunk water. Pool goggles, for the teargas. Two extra Palestinian flags for flair and a sweatshirt, in case it got cold. The bag was embroidered with the word "TARGET" on the back of it. I asked if he knew what the word meant. He didn't.

When I asked what the goal of the protesters for the event was, he shrugged. "To be here. Maybe, to hurt the soldiers, because they hurt us."

Protests like these happen every week in the West Bank and in Jerusalem. And each one is stunningly formulaic.

The most notable one is in Nabi Salih, a Friday protest against Israel's land grab for a nearby settlement that has such a clear recipe that it's even articulated on the Wikipedia page about the town:

"During the protests, there are regular clashes with the Israeli Army who attempt to disperse crowds by using teargas and other dispersal methods while Palestinian youth respond by hurling stones."

Cut and paste that into any hotspot town within or along the West Bank borders and you have a current and major form of Palestinian activism and resistance against Israel.

Such resistance and its consequences shouldn't be taken lightly. As I mentioned before, someone died the day of the Land Protest, and others have died or been seriously injured in protests around the territories on a weekly basis. But from the point of view of an observer, it doesn't sit well with me. As the hackneyed phrase goes, "The definition of insanity is doing the same thing over and over again and expecting different results."

So doesn't providing a schedule to resistance make it less effective?

I spoke to many Palestinian activists and community members about the regular protests in the West Bank, and the reasoning behind the routine. While answers varied about why each of them were personally invested in these weekly missions, the most consistent answer given to me was that the importance of showing up, week after week, rain or shine, come teargas or skunk water, was just that -- they were showing up.

The activists' message was that as long as someone recognized the problems that prompted these protests in the first place, they would not be forgotten, and the situation, in the most popular buzzword of the current Palestinian resistance, would not be "normalized".

But because these protests are so routine, they gain less traction with the press and the international community -- the breaking news element of these protests has run dry. That is, except in cases where people are seriously injured or die.

In the process, the message and meaning behind the protest can be lost among the mechanics of completing it, as in the case of my student.

Is that a fair tradeoff for consistent recognition of human rights abuses? Should we, as an international audience, find fault with the media that this tradeoff must be made? Or is it time for activists to try something new?

While I don't have an answer for that, I can say that the most inspiring form of protest I saw in Palestine was not done in a large organized crowd or painted on the walls of Qalandia checkpoint. It is another routine altogether. But it's still the act of showing up.

These are the people our students have shown us, by introducing us to their communities through their stories: The hairdresser and entrepreneur who said she considered the conflict a challenge rather than a barrier. The women's rights activist who changes her community's opinion of women one conversation at a time. The young man who works around the clock and attends school full-time to pursue the career he's always dreamed of.

They are some of the stories our students have chosen to share from their reporting for our new storytelling platform, StoriesFrom, scheduled to launch July 7.

These people who work daily in small ways to do better for themselves and their communities, rather than just doing the same thing over and over, this is a kind of resistance that touches me, as an observer, deeply, and it is something we can learn from, no matter what our political loyalties.

For the rest, I pose this question to you -- is it worth it?

Program Director at The Tiziano Project