WASHINGTON -- The Palestinian Authority on Wednesday became the newest member of the International Criminal Court, meaning the group is now allowed to pursue war crimes charges against Israeli nationals.

The news may rekindle an ongoing debate in the U.S. about the appropriate response to the Palestinians' moves to join the ICC. The U.S. has long opposed Palestinian membership in any international organization. A large bipartisan majority of the Senate supports a cessation of U.S. funding to the Palestinian Authority if it initiates or supports any ICC investigation of Israelis. While the State Department does not favor the Palestinians joining the war court, it is concerned that a funding cutoff could collapse the PA and threaten Israeli security.

The PA's effort to join the court began on Dec. 31, when President Mahmoud Abbas signed the Rome Statute and retroactively accepted ICC jurisdiction in the occupied Palestinian territories starting on June 13, 2014.

Shortly after that, the ICC opened an investigation into possible war crimes committed since that date.

In January, 75 senators, led by Sens. Marco Rubio (R-Fla.) and Kirsten Gillibrand (D-N.Y.), signed a letter to Secretary of State John Kerry expressing concern about the PA's moves. The senators reminded Kerry that current appropriations law prohibits economic assistance to the Palestinians if they initiate or “actively support” a war crimes investigation against Israeli nationals.

In response, the State Department, which has repeatedly stated that U.S. assistance to the PA enhances American and Israeli security, assured the senators that it opposed Palestinian membership in the ICC and promised to continue reviewing its funding policy. However, the department stopped short of agreeing to halt funds.

While the State Department is responsible for submitting budget requests for foreign assistance, ultimately Congress carries the authority to appropriate funding, which means the Senate could theoretically initiate an effort to cut off Palestinian aid on its own.

The department said on Wednesday that its policy on Palestinian membership in the ICC remains unchanged. "The U.S. position on this issue is well-known," said State Department spokesman Edgar Vasquez. "We do not believe the Palestinians are eligible to accede to the Rome Statute and join the International Criminal Court. We have also made clear that we oppose actions against Israel at the ICC as counterproductive. We urge the parties to work constructively and cooperatively together to lower tensions and find a path forward that can advance a two-state solution."

It's not clear what the State Department would do if Congress used its power of the purse to withhold aid. Current appropriations legislation does not provide the secretary of state with the option to waive a congressional funding cutoff in the interest of national security.

Kevin Bishop, communications director for Sen. Lindsey Graham (R-S.C.), a member of the Senate Appropriations Committee and a signatory of the letter to Kerry, said Wednesday that the panel is likely to take up the Palestinian aid issue when it marks up the budget bill this summer.

But supporters of continued aid to the PA may be able to point to ambiguity about whether the Palestinians have demonstrated “active” support for the ICC's investigation. The probe was launched by the ICC itself, as opposed to the Palestinian Authority referring an Israeli individual to the court. Palestinian negotiator Saeb Erekat said at the annual J Street conference in March that this was an intentional move.

The news of the Palestinians' ICC membership comes at a time when U.S.-Israel relations are at a historic low. Israeli Prime Minister Benjamin Netanyahu recently took heat from the U.S. for saying he will not allow the creation of a Palestinian state.

While Netanyahu has since walked back his disavowal of the two-state solution, the Obama administration is holding the prime minister to his initial comments, and has indicated that it may be more hesitant to vote against future resolutions on Palestinian statehood at the United Nations.

In the past, the U.S. has opposed all Palestinian statehood efforts at the U.N., insisting that direct negotiations with the Israelis are the only way to achieve peace. But with Netanyahu appearing unwilling to negotiate statehood with the Palestinians, the State Department has acknowledged a need to re-evaluate its approach to the Israeli-Palestinian conflict.

At the J Street conference, Erekat described last year’s decision to join the ICC as a move of desperation.

“We came to the realization that Benjamin Netanyahu is not a two-stater, and he wants to undermine and bury the two-state solution,” Erekat said. “So we thought to ourselves, what is it that we should do to enable us to maintain the two-state solution, and to look like an authority that is defending its people, and to tell Palestinians if we want to pursue international recognition, don’t use violence."

The fact that the Palestinians opened their territory to ICC jurisdiction beginning on June 13, 2014 -- shortly before the start of last summer's Gaza war -- suggests that they intend to pursue charges against the Israeli military for alleged war crimes during that conflict. This, however, could backfire, as Hamas would likely face charges as well for indiscriminate rocket launches into civilian areas in Israel.

As a result, the PA is more likely to focus on Israeli settlements in the occupied West Bank and East Jerusalem. “Every single settlement built by the Israeli government from 1968 until now is a war crime,” Erekat said at the J Street event, referring to the Geneva Conventions' ban on states from transferring their civilians into occupied territory.

“This is not a secret. No force on earth can stop this,” Erekat continued. “Mr. Netanyahu believes he can take me for a ride ... he wants to maintain the status quo. I tell him, forget you. Status quo no more.”

Although a large majority of senators signed the letter in support of cutting off aid, they are likely to face pushback from some in the Senate Appropriations Committee.

“A two-state solution remains the best way to achieve a lasting peace between Israelis and Palestinians, and I believe U.S. assistance to the Palestinian Authority is key to that goal,” Sen. Dianne Feinstein (D-Calif.), a member of the committee who did not sign the letter, said on Wednesday. “The assistance is vital to maintain the institutional foundations for a future state and sustain the day-to-day life of the Palestinian people. It is both strategic, by enhancing stability and security in the region, and necessary."

"I hope it continues, within the bounds of current law,” she continued.

CORRECTION: This article has been edited to correct the name of the State Department spokesman. He is Edgar Vasquez, not Edward Vasquez. 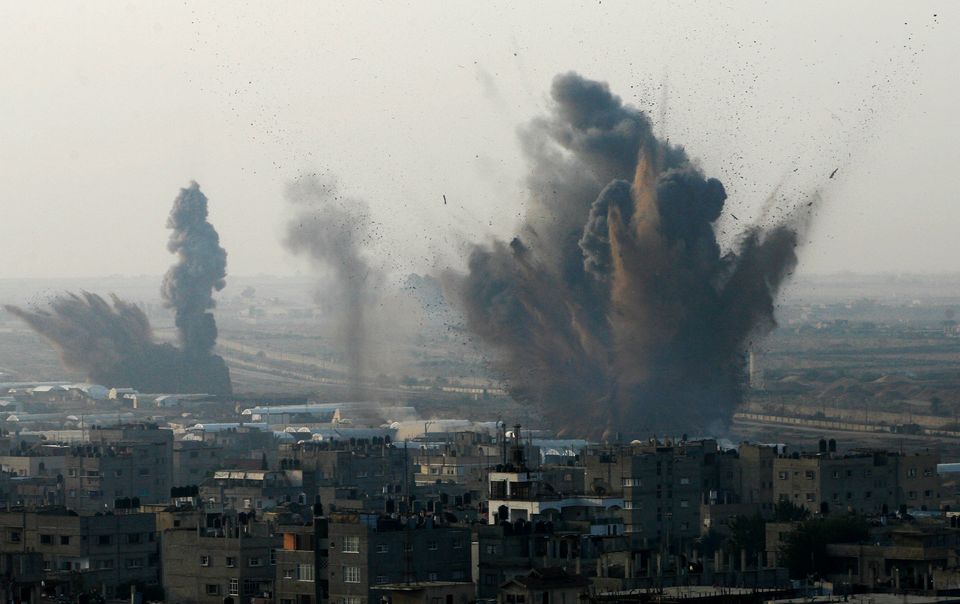