While much of the 2010 election is focused on the economy, there's another issue quietly simmering which underscores a shift in the Republican Party: abortion. Specifically, an increasing number of GOP candidates -- especially ones receiving heavy support from the Tea Party movement -- not only oppose abortion, but want to bar women who have been victims of rape or incest from having access to the procedure.

Dianne Edmondson of the Republican National Coalition (RNC) for Life told The Huffington Post that there are absolutely more candidates this election cycle opposing abortion without exceptions. Each election cycle, her political action committee, founded by Phyllis Schlafly, submits questionnaires to GOP House candidates about their positions on choice issues and then endorses candidates who advocate a strict no-abortion platform. "I know that we have many more candidates responding to us this year than we did in the last election cycle -- probably about three times as many -- and I'd say at least half of them do meet that criteria," she said. "The rest are pro-life to one extent or another."

The candidates getting the most attention, however, are on the Senate side: Sharron Angle (Nev.), Ken Buck (Colo.), Roy Blunt (Mo.), Joe Miller (Alaska), Christine O'Donnell (Del.) and Rand Paul (Ky.). All of them oppose abortion even in cases of rape and incest.

Angle received significant national attention in July when she advised young rape victims to make "a lemon situation into lemonade" -- the "lemon situation" being the rape and the "lemonade" being giving birth to, and raising, the child. Buck has said, "I don't believe in the exceptions of rape or incest" and backs a constitutional ban on abortion. The progressive group Campaign for a Strong Colorado held a press conference on Tuesday with rape and incest survivors who oppose Buck's stance. "Ken Buck is in a luxurious position of not seeming to care of the permanent impact of rape can have on a woman's life," said one rape survivor at the event.

Former Alaska governor Sarah Palin has prominently backed and helped launch some of these conservative candidates this election cycle, so it's perhaps not surprising that this position on abortion is one she helped elevate. In 2006, Palin said she opposes abortion in all instances except when a mother's life is at risk. "I believe that no matter what mistakes we make as a society," she wrote in response to an Eagle Forum Alaska questionnaire, "we cannot condone ending an innocent's life."

There are fewer and fewer high-profile pro-choice GOP candidates running for office, with California gubernatorial candidate Meg Whitman one of the few in this election. In the past, there were pro-choice politicians like Rudy Giuliani, Barry Goldwater, and George H.W. Bush. Candace Straight, co-chairwoman of Republican Majority for Choice, told The Huffington Post that these current Tea Party candidates are "out of the mainstream," even within the pro-life community. Indeed, while polls show the public generally split on abortion, a much smaller portion (generally between 15-23 percent, depending on the poll) supports banning it in all cases.

"The major impact they [these candidates opposing all abortions] might have is on Supreme Court nominees, in not allowing Obama's nominees to go forward," said Straight. "Probably, the most activity on abortion in the next two years could be in the Supreme Court or in state courts on different restrictions on abortion. ... [T]hey certainly can have impact on things like family planning, and I believe that money spent on family planning actually reduces the number of abortions."

Planned Parenthood President Cecile Richards pointed out that even existing pieces federal legislation restricting abortions, such as the Hyde Amendment, have exceptions for rape, incest, and the life of the mother. In 2006, voters in South Dakota rejected a ballot measure banning nearly all abortions in the state, in part because of an aggressive campaign arguing "the proposed law was too extreme because it did not include exceptions for rape, incest or the health of a pregnant woman."

"[I]t's a very common exception," Richards said. "I imagine because even for the most extreme anti-choice representatives, in order to get their bills through, they've got to make some exceptions because it's unthinkable for the average person that a woman would be forced to carry a child that resulted from incest or rape. So regardless of whatever their own personal views are, they've understood that it's politically unacceptable to try to carry such extreme legislation. ... I think that's why this is so startling that the Republican Party would be nominating candidates who are absolutely on the fringe of this issue -- even within their own party."

How aggressively to push social issues like abortion if Republicans regain control of Congress next year is a hot debate in the party. Republicans like Mississippi Gov. Haley Barbour, Indiana Gov. Mitch Daniels and Rep. Paul Ryan (Wis.) have called for a "truce" on these divisive social issues so that Republicans can focus on the economy.

Edmondson said that this approach would be a mistake. "The economy and jobs is probably number one on everybody's minds right now because of the huge mess that our country is in financially and the deficit that has just piled up under the Obama administration," she stated. "But that does not mean we can abandon our moral standing and our moral belief. Particularly, the Republican Party is the party of life, and that is part of our platform. And we would very much want to see this continue as a part of what we stand for as Republicans."

The Huffington Post has put together a slideshow highlighting some of these candidates opposing abortion in all cases.

UPDATE: Joe DioGuardi, running for Senate in New York, has also said in the past that he opposes abortion even in cases of rape and incest. 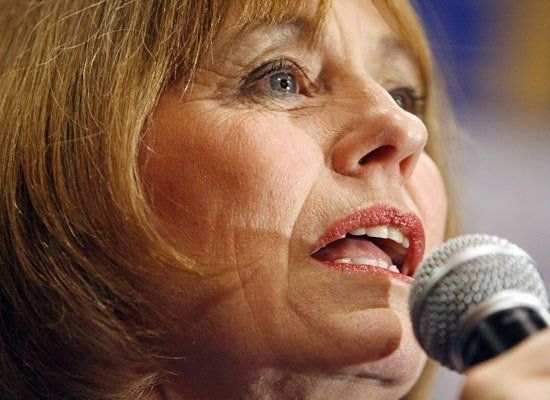 1 / 7
Nevada Senate Candidate Sharron Angle
In June, conservative radio show host Alan Stock asked Sharron Angle, "Where do you stand on the issue of abortion, a consensual abortion, from a person who is raped or is pregnant as a result of incest?" Angle replied, "Well right now our law permits that. My own personal feelings and that is always what I express, my personal feeling is that we need to err on the side of life." She then added that "two wrongs don't make a right," and said a young girl who had been raped by her father should think about making "<a href="https://www.huffpost.com/entry/sharron-angles-advice-for_n_639294" target="_hplink">a lemon situation into lemonade</a>" by having her baby and either raising it or giving it up for adoption. In another interview justifying her belief that women who have been raped or victims or incest should not have access to abortion, Angle said, "God has a plan and a purpose for each one of our lives and that he can intercede in all kinds of situations and <a href="https://www.huffpost.com/entry/sharron-angle-opposes-abo_n_629371" target="_hplink">we need to have a little faith in many things</a>."