Sarah Palin has teed off against another mocking observer -- this time a local blogger who edited a photo of the governor and her youngest child to include a local conservative talk show host. 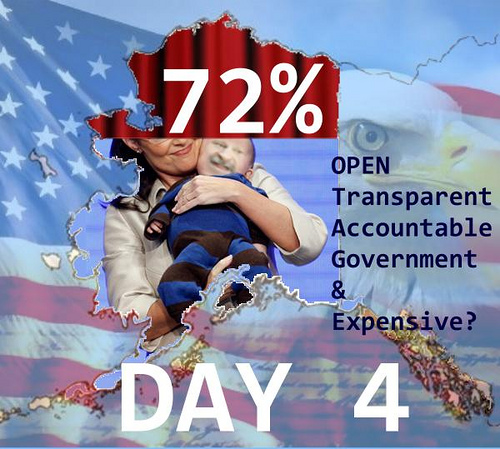 In a statement sent to Politico, Palin's spokesperson said:

Recently we learned of a malicious desecration of a photo of the Governor and baby Trig that has become an iconic representation of a mother's love for a special needs child.

The mere idea of someone doctoring the photo of a special needs baby is appalling. To learn that two Alaskans did it is absolutely sickening. Linda Kellen Biegel, the official Democrat Party blogger for Alaska, should be ashamed of herself and the Democratic National Committee should be ashamed for promoting this website and encouraging this atrocious behavior.

Babies and children are off limits. It is past time to restore decency in politics and real tolerance for all Americans. The Obama Administration sets the moral compass for its party. We ask that special needs children be loved, respected and accepted and that this type of degeneracy be condemned.

To those folks at a certain Palinbot site who think the picture above is of Trig, let me use a phrase many of you are familiar with...

It's called "Baby Burke" because it's Eddie Burke...basically his probable second-biggest fantasy about the Governor.

The photo was used to promote a fundraiser to request Palin administration records of "potentially questionable conversations between with "preferred" members of the media."