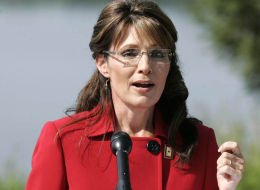 Responding to criticism that many were confused by her resignation speech on Friday, Governor Palin issued another press conference today to explain her reasons in "plain English" and without the use of sports and/or fish metaphors.

"When I last spoke about the issues at hand here on Friday," stated Palin, "I was addressing hardworking, average Americans who understand what it means to be a leader. Average Americans also understand sports metaphors and the direction a dead fish will move when in a particular body of water that has a current."

Last week's surprise press conference, conducted on Palin's back lawn in Wasilla, has been the subject of much speculation with many accusing the governor of not clearly articulating her reasons for resigning her seat as governor.

"It's come to my attention that some of my critics, mainly out-of-touch members of the media elite who don't follow basketball, were confused when I mentioned being a point guard and the full-court press that was being applied here," said Palin.

"Let me state my reasons in plain English without any sports analogies: I'm resigning because I feel I can be a more effective leader operating from the sidelines. I'm no bench warmer," she added.

Throughout the holiday weekend the media tried to make sense of Palin's resignation as well as her ability to make an entire speech without stopping once to take oxygen into her lungs.

Anderson Cooper, was candidly perplexed by all the talk about hoops and baskets.

"Honestly, I know nothing about basketball," said Cooper. "All I know about is politics."

Meanwhile, a sports reporter covering the conference for the Wasilla Times was equally confounded. "I do follow basketball and I don't know what the hell she was talking about," he said.

Standing on her lawn in Wasilla this morning, her family once again by her side, Palin attempted to clear up the confusion about fish and point guards while ending speculations that she was leaving office because of an impending scandal.

"The great state of Alaska and her great people know what I was talking about last Friday," Palin told the handful of reporters invited to attend the event. "But let me explain again to those who are eager to attack me."

"When I was a point guard at Wasilla High School," she continued, "my nickname was 'The Barracuda.' Barracudas hunt in packs and they put a full-court press on their prey, just like people have been doing to me. And driving to the hoop, this barracuda didn't want to succumb because if I let them beat me, I'd be like a dead fish floating with the current. But that's not how this barracuda is wired. No siree."

Palin went on to note that since barracudas travel in large schools they understand the value of teamwork.

"Barracudas know when to pass the ball--for victory," she said. "Or at least they would if they had hands underwater there, instead of fins and whatnot." 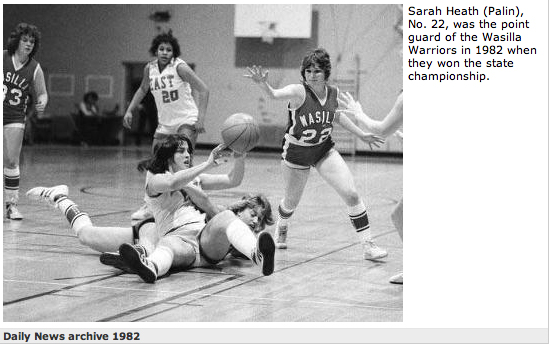 Critics say that today's press conference was even more confusing than the one held on Friday, further muddling the governor's reasons for departure. Still, Palin did manage to shed some light on her ability to make an eight-minute speech without taking a breath.

"They don't call me the Barracuda just because I'm tough," she told reporters referring to her uncanny ability to forgo breathing.

"Sometimes, I prefer making speeches without breathing at all. I'm an avid runner and depriving my brain of oxygen sorta feels like having a runner's high. Plus, I know the First Dude will catch me should I get too dizzy. He's a deacon at our family's Pentecostal church and has lots of practice catching fainters who have had demons exorcised."

Most scientists say that when the brain is deprived of oxygen it can no longer function properly, and that this could explain the governor's inability to communicate clearly. But fervent Palin supporter, Dick Kristal, contends that the brain can operate just fine without oxygen.

In response to a question posed by a Times reporter, Palin also took a moment to briefly address posts she made to her Twitter account on Saturday where she threatened several reporters with lawsuits.

"I just needed to be clear since there have been baseless allegations about me in the last several days. Just because my nickname is barracuda and I don't need to breathe, that doesn't imply that I'm a dead fish floating with the current. Let's be clear, I swim against the beltway's politics-as-usual current!"

Palin spokesperson, Peg Mapleton says the governor will be holding another press conference at noon on Thursday.